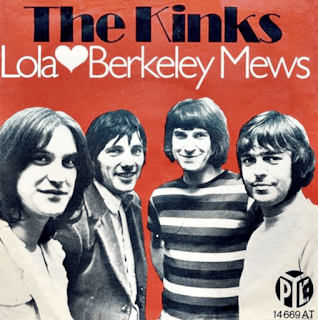 Cover version of the month #64

The Raincoats cover The Kinks

Lola by The Kinks is a magnificent example of Ray Davies songwriting skills. There is a story full of humour, delivered with a dash of mischief. You can imagine Davies smiling with a gleam in his eye as he wrote the song.

The playfulness in the lyrics is there from the off, warm chords turn to a finger picked riff and Ray introduces us to the setting of where he met Lola, cheekily and a little outrageously spelling out cola in the first verse. It's so cool, so simple yet so clever, and so effective - you're hooked immediately.

I met her in a club down in old Soho

Where you drink champagne and it tastes just like cherry cola

Davies doesn't let up, the song flows easily with his humour spilling into every verse, almost every line. There is some exaggeration as he tells the story of meeting Lola who has a deep voice who nearly breaks his spine when she squeezes him.

The fourth verse is just hilarious, leading to an even funnier break where Davies introduces the imagery of Lola picking him up and sitting him on 'her' knee.

I'm not dumb but I can't understand

Ray Davies is in sensational form, in his element as he continues his tale. My favourite section is probably the flowing break where he sings;

Girls will be boys and boys will be girls

It's a mixed up, muddled up, shook up world, except for Lola

Davies continues his tale to conclusion;

Well I'm not the worlds most masculine man

And so is Lola

Lola was released in 1970, a full 2-years before Lou Reed's Walk On The Wild Side opened with Holly plucking her eyebrows and shaving her legs and then he was a she. I would have put money on Lou's song being released first.

This is just genius songwriting, an artist completely in the zone. The inspiration for Lola has generated a few stories down the years, but regardless of whether it was a band member or Davies himself, the result is undeniable - a story beautifully, hilariously and vividly told via the form of pop music, full of a vibrant energy, Davies sounds excited by his tale, excited by the song.

How on earth do you cover it? 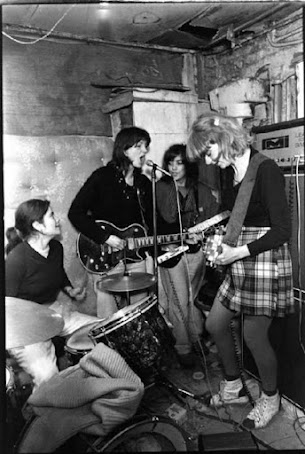 What an amazing picture! Couldn't find a credit but how cool
do The Raincoats look? Like a real gang!
Well, in 1979 the punk band The Raincoats decided to cover it on their eponymous debut album. The brilliant picture above is how I imagine the song being played, the band close together, bashing it out and having fun. The Raincoats formed around Art School and the London squat scene in 1977, with Ana da Silva and Gina Birch as the central members.
The difference is quite staggering, a band feeling their way through the song. The zip and confidence that shines through The Kinks original is replaced by a young band sounding extremely raw, yet still managing to put their own twist on it.
Ana knew a couple of chords and I could sing along with a few hymns and rock n roll tunes - Gina Birch, The Raincoats
I definitely prefer the original version, but there is something I admire and love about The Raincoats version. The beats sound almost primitive at the beginning, the vocals start very deadpan before lifting in the second verse, then lifting further in the third verse when harmonies kick in.
At times the band sound like they aren't sure what the chords are, then at times the band flow as they all sing and inject urgency into their version. I believe one of the main reasons that so many punk records have stood the test of time is precisely because a lot of the bands were far from technically great, but the rawness in terms of musical ability and production, matched with passion, creativity and energy created magic.
Well I left home just a week before
And I'd never, ever kissed a woman before
Lola smiled and took me by the hand
And said little boy I'm going to make you a man
I would have seen The Raincoats in 1994 supporting Nirvana at the SECC in Glasgow. Kurt Cobain was a huge fan. Sadly the show never happened. Kurt's love of The Raincoats, The Vaselines, The Meat Puppets and even the likes of Daniel Johnston helped propel these artists to worldwide audiences. Cover versions, t-shirts in pictures and regular mentions in interviews.
Cobain visited Da Silva in the antique shop she worked in while he was in London in 1992, asking her if she could replace his worn out version of their debut album.
When I listen to The Raincoats I feel as if I'm a stowaway in an attic, violating and in the dark. Rather than listening to them, I feel like I'm listening in on them. We're together in the same old house and I have to be completely still or they will hear me spying from above and, if I get caught - everything will be ruined because it's their thing. They're playing music for themselves.
Kurt Cobain, extract from the liner notes to the reissue of The Raincoats debut album
The Kinks original version + live version
The Raincoats version
Click here (or search for) Everything Flows cool cover versions on Spotify for a playlist of the covers I have blogged about and read on for a full list and links to previous cover of the month blogs.