The weekend that just past was an excellent one for the DIY/Independent scene in Scottish Music.

Friday saw the Scottish Alternative Music Awards ceremony take place at the Garage in Glasgow. The SAMA's (as they are affectionately known) was an idea born from the creative young mind of Richy Muirhead during his studies. It has grown arms and legs and has become a real staple in the DIY music calendar and an excellent platform for bands and artists to strive to reach.

Saturday saw the guys from Tenement TV throw a multi-venue festival named the Tenement Trail (a-la 'Stag & Dagger') and after speaking to Chae and Paul last night (and witnessing the scenes at the Art School) it was an incredible success. These guys are developing all the time, literally buzzing with creativity, full of ideas and never afraid to make an ask or try something out. Top artists like Jake Bugg are playing sets for them, they are getting involved with festivals in a big way, promoting nights in Glasgow and beyond and reaching for the stars. The future is burning bright for these guys.

Despite the current financial climate, the appetite for music in Scotland is as strong as ever. There may not be as much money as there once was in the music industry, but that is only strengthening the resolve and inspiring the creativity of bands, artists, labels, bloggers and promoters and things are flourishing in Glasgow (and across Scotland right now). 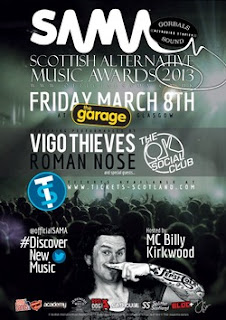 2013 is shaping up to be an incredible year for the D.Aye.Y music scene in Glasgow. Bursts of creativity from artists and bedroom/flatmate labels are gathering ever increasing exposure that is really threatening to blow quite naturally over into the big time.

This blog will look at a few of the people responsible for that;

As it is my blog I am going to start with Vigo Thieves who I manage. This is a band shooting for the stars armed with an ever increasing collection of anthems with the kind of universal lyrics that soundtrack lives - think of the stuff that Weller served up with The Jam but fed on a diet of U2, Simple Minds and New Order.

The epic cinematic songs are enhanced by the bands incredible range of videos. That partnership is really setting them apart from their peers in many ways (along with the fact that they are commercial and don't hide it).

'Heartbeats' was used to soundtrack the T in the Park line-up announcement in 2012, adding a couple of thousand new likes to their Facebook page in a week. The band then played the BBC Introducing Stage at the festival and packed it out - check this footage.


'Forever' featured Jody Latham from Shameless and new video single 'Ghosts' features John Leslie entering an old mans drinking den and promptly getting up on karaoke to sing the song.


Their songs, videos and bond with their fans through Social Media is DIY on a scale that no-one else is doing. The 'Heart & Soul Pt II' EP has just been released an it is off the scale.

So OK I started off with some shameless self promotion, lets look at who else is doing well.

Two lovely people that I have met since becoming involved in band management are Lloyd and Halina who run Olive Grove Records, as well as Peenko and Glasgow PodCart. I do wonder how little sleep the couple manage giving the time and energy they put into their blogs, podcasts, promotion, label and band management, but somehow they keep going.

Olive Grove Records in particular are developing at a fast rate of knots, with the pair quick to recognise  talent and offer them a platform to release.

The Son(s) is an act of theirs that I particularly enjoy, but look out for them developing with Jo Mango and Randolphs Leap in particular, with Lloyd and the Leap forging excellent links with Fence Records and 6Music. I do feel that it is only a matter of time before the label breaks through with the right artist and song...and a little bit of luck which everyone needs and their hard work deserves.

Another label I find interesting right now is Comets and Cartwheels. They have announced an innovative partnership with Brewdog and their artists will be playing shows at their bars throughout the country. This is innovative and also commons sense. Bars need business, musicians need good venues, everyone should be a winner....and I think in this case that will happen. 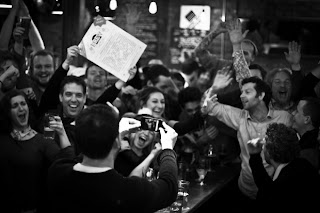 Fake Major are the most recent signing to the label and I imagine that as they feature former members of Endor that they will have learned a lot and be eager to crack on. Their initial offering (below) certainly highlights the quality that they and the label will be striving for.

So the SAMA's, Tenement TV, bands like Vigo Thieves selling out 2-nights at Tuts and gaining incredible exposure and a fanbase for a DIY band, labels like Olive Grove and Comets & Cartwheels pushing further forwards and an army of bloggers and music fans backing them up.

It is an exceptionally exciting time for Scottish D.Aye.Y Music (there is a blog name for someone), heightened even more by the emergence of Chvrches, showing other bands that they can make it.

Who knows what they year will hold.

Posted by everythingflows at 13:05 No comments:

I'm a big fan of the label Moshi Moshi; their taste in music is rather good, always discovering little gems  and providing a stepping stone for a number of artists who have gone on to bigger things; Bloc Party, Florence and Hot Chip to name a few.

One of their forthcoming releases is from a Glasgow band, the brilliantly named Casual Sex. I imagine that this blog may get a lot of hits!

Released on limited edition 7-inch vinyl via the Moshi Singles Club on 1st April, 'Stroh 80' is a fuzzy electro/acoustic groove with slices of glam guitar thrown in for good measure.

The production is rather beautiful, the lyrics full of humour and the delivery coming on like a cross between Alex Kapranos and Kevin Rowland with a dash of Bowie.


Dream, I dream til you leave
Cause you, you poison my sleep

The band launch the single with a show at Nice'n'Sleazys on Friday 5th April.


Posted by everythingflows at 12:45 No comments: