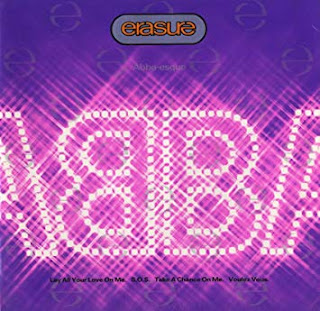 My kids recently discovered ABBA via the Mama Mia film, so our house has been full of pop perfection for the last month or so. Thankfully it isn't always the film that is on. There is only so much of Pierce Brosnan singing that I can cope with!

So it got me thinking about the monumental ABBA-esque EP by Erasure that came out in 1992 when I was 16. Erasure seemed to be everywhere with this - Top of the Pops, the Chart Show, in the papers, in magazines and all over the radio.

Andy Bell and Vince Clarke camping it up in drag in the Take A Chance On Me promo video is something that I'm sure most people from my generation will remember!


Erasure were huge in the late 80's and into the 90's, their 1992 compilation POP: The First 20 Hits emphasised their ear for pop with Sometimes, A Little Respect and Stop being favourites of mine. Vince Clarke is a pop genius, early Depeche Mode is really the only era of the legendary band that I enjoy and then his work with Alison Moyet as Yazoo produced some incredible synth pop soul gems, Only You must be one of the best debut singles released in the 80's.

After Yazoo, Clarke placed an advert in Melody Maker to recruit a singer and he discovered Bell. The duo have never looked back and hit upon formula of euphoric synth led pop that broke down barriers and led to critical acclaim and huge commercial success.

Covering ABBA was probably very natural to two people so infatuated with pop music. And Erasure set out to have fun whilst doing it.

Clarke provides the beats and synths and whilst its not quite karaoke, Bell is clearly enjoying himself and not taking it too seriously. As was the way in 1992, in Take A Chance On Me they duo introduce a female to sing a brief ragga rap.

Erasure covered Lay All Your Love On Me, S.O.S. , Take A Chance On Me and Voulez Vous on the EP. Remaining pretty true to the originals (especially in terms of vocal melodies) and bringing ABBA's pop perfection to a new generation. After a couple of number 2 singles, this EP gave them their first number 1.

And what can you say about the ABBA originals?! They are pristine and sublime slices of pop perfection. Lyrically, melodically, in delivery, structure and production. Timeless! They deserve an essay, but for now just take some time to revisit some masterpieces of pop.