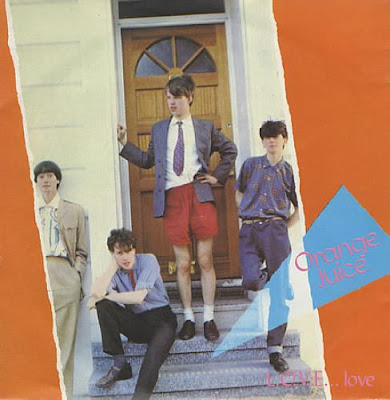 Al Green released the original version of L.O.V.E (Love) back in 1975 and it also featured on his Al Green Is Love album from the same year.

Under a decade later, Edwyn Collins' Orange Juice covered the song as a single in 1981 and on their 1982 debut album You Can't Hide Your Love Forever. For many years I thought this was a Collins original, it was only a few years ago that I learned, it was in fact, a cover version.

The Orange Juice version is exquisite and incredibly true to the original. The beat, the horns, the feeling ... the boys could play.

For me, it really highlights how far they had come (in an extremely short space of time) from their Postcard Records releases, that started with Falling & Laughing in February 1980, taking in Blue Boy, Simply Thrilled Honey and ending with Poor Old Soul in March 1981. And it highlighted the standard of songwriting, performance and production that Collins was setting for himself.

I guess the reason I thought it was an original is Edwyn Collins voice. It fits like a glove. It sounds like such a natural fit. The way his voice rises, asks questions, portrays honesty and tells it like it is.

And that is something that Edwyn has continued throughout his career.

Love is a walk down main street

Love is an apple that's so sweet

Love is something that can't be beat

The original is just sublime, simply wonderful, you just can't help fall for it and appreciate what a beautifully written and perfectly performed song it is.

Written by Green, Mabon Hodges and Willie Mitchell, who also produced the song, L.O.V.E (Love) just oozes soul and feeling. Green's voice rises high at times but he always sounds well in control. The band are locked into a real groove, just allowing Green to do his thing.

I can't explain this feeling

Can't you see that salvation is freeing

You'll find a list and links to previous cover version of the month blogs below.