Sunshine Of Your Love

Cover version of the month #46 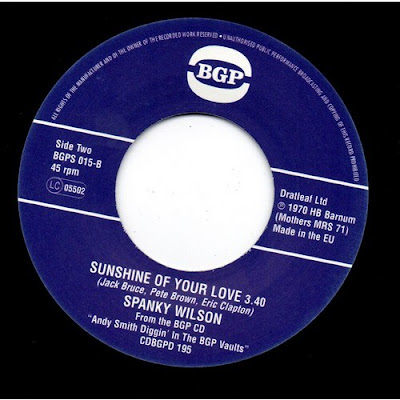 Those drums, they really kick, the horns jab hard, again and again, the vocals are so clear, raw, clear and if you don't get tingles down your spine when they rise ....


I'll be with you when the stars start falling

And listen to the way the bass becomes more important through the song as it progresses. Spanky Wilson's cover of Cream's Sunshine Of Your Love is seriously soulful, funky and jazzy. She lets rip and her vocals are jaw droppingly, spine tinglingly good. She is totally 100 percent on it!


Sunshine Of Your Love was originally written and recorded by Cream in 1967, the summer of love. It's slower, heavier and although it is still extremely powerful, for me Spanky Wilson's version blows it out of the water, I could listen to her version 10 times in a row.

I was fortunate to catch her live at The Arches back in the day when she was promoting an album she had recorded with Quantic Soul Orchestra - what a voice. Spanky Wilson's song You is outrageous, I discovered it on a Living In The Streets compilation - wah wah jazz, funky soul and other dirty grooves, I would highly recommend buying a copy.

I think I first came across the song in a Jimi Hendrix documentary when it cuts to him playing Hey Joe on the BBC programme A Happening For Lulu, halfway through he announces he is going to stop playing this rubbish and dedicate a song to the Cream, regardless of what kind of group they may be in, I dedicate this to Eric Clapton, Ginger Baker and Jack Bruce.

Hendrix and his band then lock into the groove and play an instrumental over the closing credits, with Hendrix at one stage shouting 'they're trying to throw us off the air'  or words to that effect. Try as I might, I can't locate this on YouTube. It is thrilling television, the best I can find is a mini documentary on it, unfortunately not letting the clip run from start to finish.

Again for me this version is much more thrilling than he original. Hendrix is playing for fun and lets his passion and imagination run wild.

It's not that the original is bad (see further down), it's just that, for me anyway, Wilson and Hendrix take the song to higher places.

Read on for links to all previous cover versions of the month.

I was just 17 (you know what I mean) when I saw Jimi stop "Hey Joe" and start playing "Sunshine Of Your LOve". It's still the most revolutionary thing I've ever seen on TV and poor Lulu was gobsmacked.