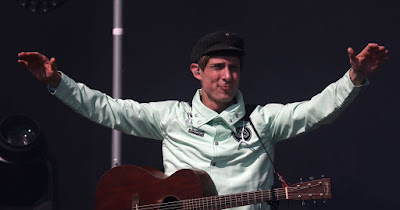 Glasgow's Gerry Cinnamon is no stranger to a choice cover or two. His past sets have been peppered with them, showing off his taste and his talent by covering classics like Adored by the Stone Roses and Redemption Song by Bob Marley, two songs I love. However, my personal favourite has to be his transformation of Discoland by Flip n Fill from 2004.

The original is happy hardcore, so simple, almost throwaway, but at the same time it is pure pop brilliance. The hey, hoooo, hey hey, hoooo hoooo is genius - you can sing on first listen.

There can't be many people who have taken a happy hardcore tune and played it on an acoustic guitar, but Gerry Cinnamon actually takes 3 of them and mixes them together effortlessly. In addition to Discoland he also takes in Wonderful Days by Charly ft. Mental Theo and I Wanna Be A Hippy by Technohead. This is a cover version that probably doesn't make much sense on paper, but when played as a euphoric acoustic sing-song it actually makes such perfect sense.

Check Gerry performing it live at TRNSMT from the sunny summer of 2018.


When Cinnamon played Discoland at the Barrowlands (review here) recently it was uplifting and beautiful. The crowd were singing along in fine voice and when Gerry gets to the take me up, up, up and away section it takes things to another level. It was euphoric, the whole set was.

There was only ever going to be one addition to my Cover Versions of the Month section of the blog after the Barrowland show. I should have blogged on it before.

But check the originals below and then watch Gerry smash TRNSMT above (his full set is on YouTube) with his cover version. It is an inspired cover, the way he loops his guitar, the way the crowd respond to it, the joy it brings - sublime.