Well  it has been a blast. Almost 5-years to the day they formed, Futuristic Retro Champions have sadly called time on their adventures in pop. As a brother, friend, fan and manager, I've had loads of fun and learned lots about working with a young band.

There have been many highlights; a support with The Vaselines in London and support from Eugene Kelly (on stage and off), artwork from Martin Creed, radio play, the endorsement of Kissy Sell Out, the Mono launch of 'May the Forth', the Hidden Lane Festival and watching a band develop into something quite special. Who knows what would have happened if they had continued with the rate of progress they built up in 2010? 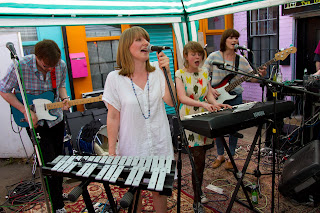 FRC's, Hidden Lane Festival, 2010
It's time to move on though and I'm delighted that the band decided to go out on a high with two farewell parties and the release of an album; 'Love & Lemonade', that contains pretty much everything they recorded.

The album is available on ltd edition double cd with 26-tracks fo only £7, and a 25-track edition (not including the cover of Robert De Niro's Waiting) is available for download from itunes and other places as well.

Friday night started well. The band had a final practice session in the afternoon and were in good form at soundcheck. The venue started to fill up nicely and doors opened at 8.30pm, with the lovely Manda Rin playing a great selection of tunes to warm people up.

Little Eskimos came on around 9.40pm and it was great to see so many people coming downstairs to check them out. Lynn very kindly watched the first half and came up to take over the door to allow me to go down and watch one of my favourite bands. Kevin very kindly dedicated one of my favourite songs 'Broken Heart Bridgade' to me. It soars to places other bands can dream of. Not that Little Eskimos talents end there, far from it and I would highly recommend checking them out. They ended the set with a special cover version of FRC's 'May the Forth', turning an electro-pop gem into a bittersweet, heart tugging ballad.

I closed the door upstairs just as the first strains of 'Epic New Song' started blasting out from down below. I had actually turned a few people away due to the fact that the venue was close to over spilling, but I called them over and said they could squeeze in if possible. After the first song ended I called for Sita to ask everyone to take a step forward and that eased things slightly.

'Hi' was next, the first song the band wrote together and a few people sang along with the 'woah-oh-oh-oh, HI' chorus. The band invited their friend Fergus Weir on stage for the deep booming section of 'Let's Make Out' and it was a real highlight over the course of the weekend. The band flew through the soaring 'I want to be in your arms, I want to see all your charms, I think that we should make out' chorus.

Fergus took the time to thank the band for all the fun he has had with them and he made a short but emotional speech, reminding everyone that unfortunately the fun would be ending soon.

Harry took on lead vocals for 'Speak To Me' and the girls all joined in with the sugar sweet harmonies on the middle eight section;


'you and me are lofi, hanging out in our torn up levis, stick a record on the hifi,
and point the speakers right up to the sky'
'Strawberries & Vodka Shots' was pop perfection before 'Count To Ten' , an ode to a twee indie DJ slowed things down a little.
Ceal took on lead vocals for 'Uh Oh (No Show)', a beautiful 3-minute pop song about meeting a boy at a disco and not making it home. Not that Ceal would ever do such a thing! It was one of the last songs the band wrote and it is one of my favourites.
The downright dirty and sleazy 'DIY Lovesong' was dedicated by Carla and Sita to anyone who likes to 'do it themselves' with the bands humour shining through on the infectious chorus;
'I'm going to homebase to get some glue, so I can stick back together me and you,
it's just something I really have to do, cause I can't stand being apart from you'
Next up was the melancholic 'Isn't It Lovely?' and I have to admit to having a few tears in my eyes, the glorious refrain caused me to well up.
Not for long though as the band blasted through the trio of 'May the Forth', 'Jenna' and 'You Make My Heart' to leave the crowd gasping for more. Before the last song the band thanked everyone and there were a few cries of 'don't split up' and 'stay together'.
Saturday April 9th - the Wee Red Bar with Emelle and SPILL DJ set
On to Saturday and back to where it all began. The band all met at Edinburgh School of Art and they played their first gig there back in the summer of 2006.

I drove through with Lynn and Marty, arriving at 5pm and sitting outside in the sunshine as the band began to arrive. We left them to soundcheck and went to a cracking Japanese restaurant on Lothian Road for some dinner.

All was well when we returned, with the support act Emelle finishing their soundcheck.

Before I knew it, doors were opening and people began to pour in. Emelle played a good wee set of celtic inspired pop/rock with lots of catchy refrains. Lead singer Craig was a cool, funky wee guy.

The DJ's were the same DJ's that played at the very first FRC show at the Wee Red Bar back in 2006 and they played a fantastic mix of stuff ranging from soul and funk, through to jazz, pop and indie rock.

Futuristic Retro Champions took to the stage, well the floor and after thanking everyone for coming (112 people according to the doorman) they launched into 'Strawberries and Vodka Shots' and they just didn't let up from there on in.

'Kitten With A Loaded Gun', 'You Make My Heart', 'DIY Lovesong' and 'May the Forth' swiftly followed. It was like the band were showing off - this is how good we are.

Harry took over lead vocals for 'Speak To Me' after yet more emotion, with Carla paying tribute to their tutor Paul Carter who sadly passed away just a couple of years into the FRC's career. He had encouraged them to form a band and write music after their initial demos.

'Let's Make Out' was thrown into the set with the song dedicated to their friend Craig as 'Craig is the best at making out'. In the absence of Fergus, Craig got up to sing along. Well he shouted a bit and stood about looking drunk - it was all good fun!

'Robert de Niro's Waiting' was a blast and 'Pulling Box Shapes' was a riot, with Carla inviting former FRC trumpet player Dan to dance at the front. 'Epic New Song' wasn't so new, but it was epic, before Dan joined the band to play on their first ever song 'Hi'.


Then it was time for an emotional dedication to the bands great friend Jenna, with the band joking that tonight was her first time on the guestlist!

'Jenna' is one of the bands most loved songs and tonight it was a joy. The band held it together to get through it with everyone joining in with the chorus and handclaps and the 'E L E C T R O' section.


'I went out with Jenna last night, she looked alright, we danced all night'
That was supposed to be it, the band hadn't done an encore the night before and didn't plan to do one in Edinburgh, however the crowd wouldn't let them leave without another song, so they played 'Count To Ten', ending quite aptly with the line 'this is my religion, this is my religion.'


Thanks FRC's, it was a blast.

Posted by everythingflows at 08:11 No comments: