Cover version of the month #44 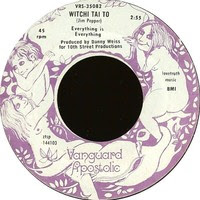 BMX Bandits are not the only band to have covered Everything Is Everything's 1969 single Witchi Tai To, but it was through the Bandits that I first heard the song and a recent tweet via Bandits leader Duglas T Stewart, relating to his love of the Harpers Bizarre version, caused me to revisit the song.

Back in 1993 I bought the Little Hands 4-track CD single/EP by BMX Bandits and track 3 was a beautiful home recording of a song called Witchi Tai To. It was quite beautiful, very different from anything else, I really fell for the song and it has always been a special treat when BMX Bandits played it live.

On the recorded version there is a chugging acoustic guitar and Duglas and Bandits from the time harmonise tenderly with real care before an electric guitar and beats come in. It flows beautifully, becoming like a mantra, lasting 5-minutes but I wish it was even longer.


Duglas kindly answered a few questions on BMX Bandits recording and his love of the song. I hope you enjoy the Bandits version (above) and the Harpers Bizarre one that Duglas fell for and also the original by Everything is Everything. Both feature below.

EF - Do you remember the first time you heard the song Witchi Tai To?

DTS - I was in Japan touring with BMX Bandits, I think it was 1990 and there was so many great albums available there on CD reissue that you couldn't get easily in the UK. I was particularly interested in a genre of late sixties American pop that the Japanese called Soft Rock (it means something very different here).

I met a girl called Midori who was still in her teens but seemed to know so much about this kind of music and what were the best groups and albums. She turned me on to Roger Nichols and the Small Circle of Friends, The Millenium Sagittarius, The Innocence and recommended the reissues of Harpers Bizarre's albums.

I already knew their hit version of Simon and Garfunkel's 59th Street Bridge Song (Feelin' Groovy) and their version of Cole Porter's Anything Goes and loved both, so I was keen to hear more. I really loved the stuff I got by them, especially the second and third albums. Anything Goes and The Secret Life of Harpers Bizarre. The fourth album Harpers Bizarre 4 was good but weaker than the others. But it contained the track that I loved most, Witchi Tai To.

The song on the surface was very simple, it went around in a circle but there was something so unique and a spiritual feeling about it. I had no idea what most of the lyrics meant but music is an international language that goes deeper for me than words. The music, not the lyrics, is the part of songs that communicates straight with the heart and bypasses the intellect.

The recording was so beautiful, the bass line, the instrumental hook line, the harmonies. I became obsessed by it and would listen to only it on repeat over and over for hours on end. I turned Norman on to it when I got home. I can't remember if Francis and Joe also bought that album on the same trip to Japan but they also certainly loved it.

EF - You covered the song back in 1993 and the recording is pretty special, very tender and caring? What are your memories of recording it? It is described as a home recording - was it your home?

DTS - I'm pretty sure we recorded it at least a couple of years before it was released. I am glad you say you like the recording but it wasn't done with that much care. Francis, Norman and I were all at Norman's Gran's house in Bellshill. Norman lived there at that time and BMX Bandits had often rehearsed there. One day because we were all still enthusing about the song and the structure and that bass line, we decided to just do a version with the three of us. I'm pretty sure it only took an hour or two. We used a simple drum machine and I think we thought that it didn't compete with the Harpers Bizarre version but we enjoyed doing it. People still say how much they love our recording of it and I'm sort of surprised but I think it's because for lots of people that was what they first heard and we pretty much stuck to the Harpers Bizarre's template. 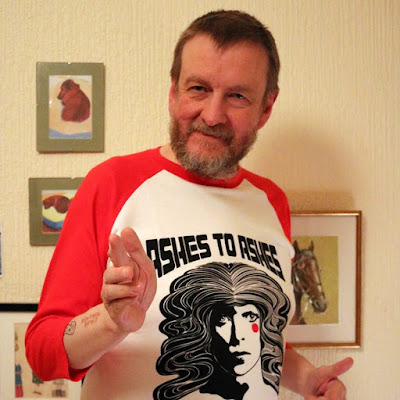 EF - It flows so beautifully as a song, what is it like to play live?

DTS - I always love playing it live. I think playing it live, with Francis or Stuart or Jamie on drums and more developed harmony parts and dynamics, it's much better than our home recording version. We have often thought about doing a proper recorded version but have never got round to it.

EF - Has your appreciation grown over the years? What do you think about the song now?

DTS - Over the years I've got to know more about the song and heard other versions, some good, some less to my taste. There's a version by Brewer and Shipley which I think was a sort of hit in the U.S. but I really hate that version and I'm glad it wasn't the version I first heard or I probably wouldn't have fallen in love with the song. The song was written by a native American musician called Jim Pepper and was based on a tribal spiritual song. The original version was by his group Everything is Everything and I think that's also a really great version. Just avoid the Brewer and Shipley 'hippy sh*t' version.

I have a theory the song might have been an inspiration on two songs by Wire, Outdoor Miner and Kidney Bingos. Both songs certainly seem to contain elements of Witchi Tai To in them. Outdoor Miner is a masterpiece so if they did borrow from Witchi Tai To, I'm glad that they did.

My appreciation and love of the song has never diminished and even now I will still put on the Harpers Bizarre version on repeat for 30 minutes or an hour.

I ended up marrying Midori, who introduced me to so much great music and encouraged me to be unafraid of taking our music into new directions. We've not been together for many years now but I will always be grateful to her.

Thanks to Duglas for sharing his love for a beautiful song and for the memories of discovering and recording it.

Let's end with the original, written by Jim Pepper and recorded with his band Everything Is Everything, Witchi Tai To was derived from a peyote song of the Native American Church which he had learned from his grandfather.

I hope you enjoy the 3 wonderful versions of this song.