Cover version of the month #73
The Lemonheads cover Simon & Garfunkel 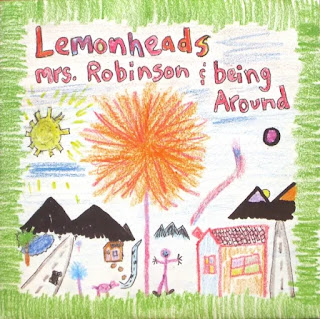 Sometime back in 1992 I heard Mrs Robinson by The Lemonheads and also caught the video that was on heavy rotation on MTV. I bought the 7-inch single and subsequently bought the album it was on - It's A Shame About Ray. I'll be blogging on the album soon as it is receiving a deluxe reissue for its 30th anniversary.

Mrs Robinson wasn't originally on the album. The Lemonheads had recorded it (under duress from Atlantic Records) for the 25th anniversary of the film The Graduate, where the song by Simon & Garfunkel had featured back in 1967. The video for the single splices between shots of The Lemonheads on a boat on the canals of Amsterdam (?) and scenes from the film.

The Lemonheads scuzzy bubblegum garage pop version became a hit all over and Dando became an indie pinup, crossing over into the mainstream through his incredible good looks and hedonistic lifestyle.

I absolutely loved (and still love) The Lemonheads version and the beautiful b-side Being Around, so clever, funny and melodic.

The do, do, do, do, do, do intro is pure pop and after a burst of guitar the drums kick in and the band tear through the first verse. I love the garage psychedelia outro that goes on for 40-seconds.

Evan never played the song when he toured It's A Shame About Ray for the 20th anniversary, so it will be interesting to see if he does this time. 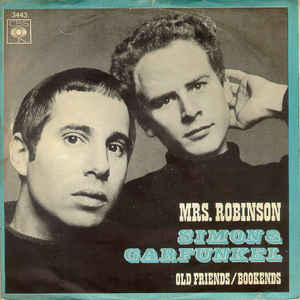 Simon & Garfunkel released Mrs Robinson as a single and on their Bookends album back in 1968. A 30-second introduction introduces us to the key guitar riff and vocal melody of the song, before bursting into the chorus. Paul & Art are in perfect harmony
One thing that surprised me when I listened to the song for the first time in a while was its length. I would never have guessed that Mrs Robinson was over 4-minutes long!
Simon's lyrics are so clever, introducing politics in the verse beginning Sitting on a sofa on a Sunday afternoon that leads to the lines;
Going to the candidates debate
Laugh about it, shout about it
When you've got to choose
Every way you look at this, you lose
That last line hits politics absolutely spot on - every way you look at this, you lose!
I do think there is a touch of psychedelia in the way Simon & Garfunkel sing. Their voices are so beautiful and gentle, the playful intro, then the way they rise for the final verse. I love how the guitar riff is played upon for the outro, something The Lemonheads picked up on.
Check the stunning romp through the song by The Lemonheads on 90's cult classic show The Word and Simon & Garfunkel wowing Central Park.
Both versions have been added to my Cool Cover Versions playlist on Spotify, or search for Everything Flows Cool Cover Versions.
A list and links to all previous covers of the month blogs is below.
The Lemonheads live on The Word
The Lemonheads official video
Simon & Garfunkel - audio
Simon & Garfunkel - Concert in Central Park