Cover version of the month #66 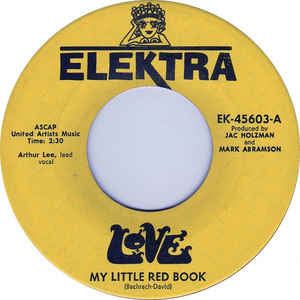 The genius partnership of composer Burt Bacharach and lyricist Hal David combined to write My Little Red Book for Manfred Mann and the song featured in the 1965 film What's New Pussycat?

Los Angeles psychedelic pop group Love then covered the song in 1966 for their eponymous debut album (it was also their debut single) and it was through Love that I was introduced to the song many years later.

Love's 3rd album, 1967's Forever Changes was an album that I felt I had to own after reading so many of my favourite groups mention it during interviews. So, from memory, I bought that first and then worked back through their catalogue, helped by the fact that FOPP were selling Love albums on CD for a fiver! 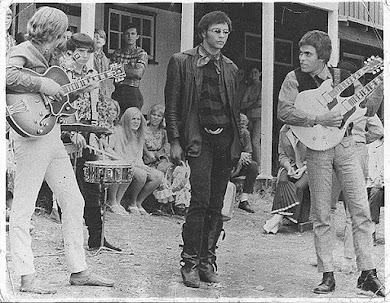 Then, somewhat remarkably, Arthur Lee and a modern day incarnation of Love (the band Baby Lemonade) were announced as playing King Tuts Wah Wah Hut! Arthur was fresh out of prison and thanks to having an incredibly loyal fanbase in the UK (Liverpool and Glasgow in particular) he was on tour. Would he show up? How would he sound after years/decades of substance abuse?

It's safe to say that there was a buzz in King Tuts that night. It wasn't sold out, I recall people sitting on the floor before the band came on stage. Arthur looked strong and tall, he sounded magnificent, within seconds everyone knew they were witnessing something special. You could have heard a pin drop during You Set The Scene, my favourite Love song, I still think of Arthur singing as the band dropped down to a low groove I see your picture, it's in the same old frame ... his voice was wonderful.

Arthur announced that customs had lost their equipment so they were playing with instruments borrowed from Belle and Sebastian. I was transfixed and caught them a number of times over the years at the Liquid Room, Usher Hall, Academy and I'm sure I saw them 3 times at Tuts. Certainly twice. 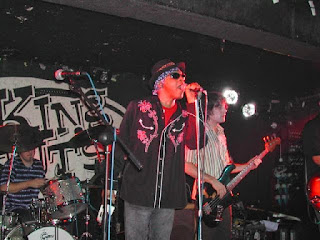 Arthur Lee and Love at King Tuts
This is from a 'secret' Forever Changes show they played
Watching Arthur and his band live made me appreciate his catalogue of songs all the more. I always find that when I see a band in person. One song that stood out was My Little Red Book. A shake of Arthur's tambourine set off a throbbing bass, drums and guitar and then the voice!
The energy that leaps out of the song is spine tingling. The way Arthur adds in an extra talk in all I did was talk, talk about you gets me every time. The band are locked in a groove, the relentless guitar and bass riffs and beats behind Arthur's strong voice creates an urgency that still captivates 55-years after release.
Arthur tell the tale of getting out his little red book the minute he is ditched by his girlfriend, determined not to sit crying and nursing a broken heart, he goes out dancing with as many girls as he can, but he just can't get over his loss.
I went from A to Z
I took out every pretty girl in town
They danced with me and when I held them
All I did was talk about you
Hear your name and I'd start to cry
There's just no getting over you

Love's My Little Red Book is two-and-a-half minutes of garage pop perfection. I love when Arthur hums in the short instrumental. You believe him every time he sings there's just no getting over you, oh no. The whole song aches with passion, regret and soul.

Manfred Mann's version is tame in comparison. It's the same song, but the urgency isn't there, it's more theatrical. It's just not quite right. Bacharach himself has been quoted as saying "It's just a very nervous sounding record. They were uncomfortable with that song." (Record Collector)

I count myself extremely fortunate that I got to see the maestro Burt Bacharach at the Kelvingrove Bandstand in the summer of 2019. He was grateful that Love recorded the song and breathed new life into it and he was impressed by the cheer of the crowd when he mentioned Love.

So although Love's version is a cover, in this case, they most definitely make My Little Red Book their own.

You can check Bacharach's own version along with that of Love's and Manfred Mann's below. They have also been added to my Spotify playlist.

Nice piece. Great song. Pretty certain that Arthur only played Tuts twice. The second time billed as the Andmoreagains. The first is probably still the greatest gig I’ve ever seen.

Yeah that's right, it was a secret show. My memory isn't what it used to be. Yes the first show was incredible.