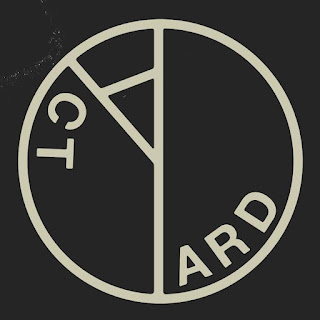 Every so often I invite a friend to write a guest blog. It's been a while. But at the weekend I asked my friend Simon to write a review of The Overload, the debut album by Yard Act.

I'd been trying to get tickets for their forthcoming show at Mono in March after falling for their song Fixer Upper. Mono is sold out.

Simon posted about the album in a beautifully thoughtful and poetic manner, so I asked if he would be up for writing a blog. Simon was, but it might take a couple of weeks cause he was super busy. Fine, no rush, no worries.

And then Simon's stunning review arrived in my inbox as I was lying listening to the album last night.

I hope it's perfect timing for you too. Read on for Simon's review and details about Yard Act's recently announced winter 2022 tour when they'll be back in Glasgow at Saint Lukes. 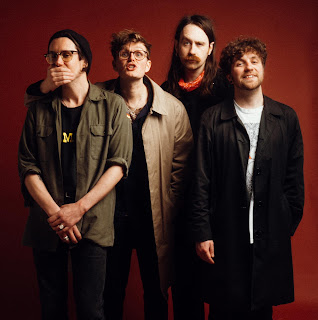 You'll be hearing a lot about Yard Act in 2022. You'll keep on reading about sprechgesang and sprechstimme, Pulp, The Streets and most of all The Fall, and, just like the ones you're reading here, those words may or may not be worthwhile. And when The Overload wins the awards that will inevitably rain down upon it, there will be so much more breathless prose - perhaps some backlash too, from the duller witted wing of the cultural commentariat - that some of you might already be switching off in anticipation. As the kind of cynical mid-forties iconoclast for whom 'yes but Mark E Smith was doing that in 1978' has become a watchword over the past four decades: I hear you. I really do.

But please listen, and listen well, because this record matters. If it's the hipster dish du jour, it's also so much more: a piece of work that arrives so fully formed that its scope, its ambition, its sheer bloody humanity might be easily missed. All the jagged, twitchy Fall-ings, the majestic abrasive PIL-aging, the wryly self-referential Cocker-ness: sure, these are four young men who know the past 40-plus years of left-field indie inside-out. (And I don't think it's a coincidence that the album shares a name with Talking Heads' most apocalyptic moment.)

But I don't think any of that matters, either. While the likes of me can pore over this as a perfectly postmodern example of what guitar music can be, it's also the first great post-Brexit record; the first I've heard that reckons with the sheer bloody absurdity of where we are right now by holding up a mirror and saying: this is it, folks, this is it ... but can you see that tiny flash of hope there too? Over the course of its 37-minutes, The Overload's initial fury abates yet then expands - reflected in a very subtle augmentation of the instrumentation - and while it would easily have been enough to end the record with the majestic Tall Poppies (we are, all of us, flawed and constrained, and here are the acts of life, death and songwriting itself laid brutally bare), Yard Act keep on driving on, the pissed perspective-talking of Pour Another paving the way for the deathless gasp of 100% Endurance, a song which is nothing more or less a desperate howl for kindness in a burning world; an exquisitely audacious concept that exposes the simplest, most beautiful truths. Everything that came before it leads to this moment, and this moment points to everything else, no matter how big or small.

I have no idea how Yard Act follow this record; what they do next. No matter. As they put it so perfectly themselves at the end: it's not like there's going to be nothing, is it?

Yard Act play a sold out show at Mono on 3rd March and have recently announced a show at Saint Lukes on 22nd November. Acts fast for tickets. 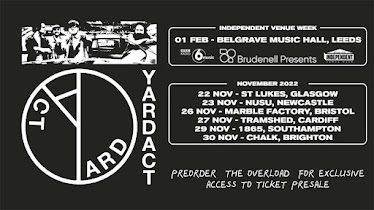