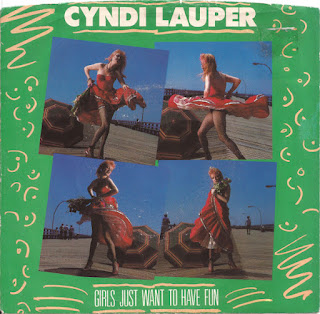 Girls Just Wanna Have Fun is a cover version! I've checked and it is true!

Robert Hazard wrote the original and recorded it in 1979! Check it out HERE

I've not really been able to trace what happened to the song between 1979 and 1983. It's possibly Hazard (now passed away) pressed some copies for a single release and then it came out on his eponymous 1982 album. But somehow Cyndi Lauper, possibly through producer Rick Chertoff, was approached to update the song and reclaim the lyrics from Hazard's original male point of view.

The timing, for the MTV generation, was absolutely perfect. Lauper, singing from a female perspective, rearranged the song to become an anthem of female solidarity.

As a debut single, Girls Just Wanna Have Fun, was an absolute gift for Lauper, who, through putting her own stamp on it, completely changed the original meaning behind the song. It's not too bold a statement to say that, in a strange way, Lauper completely rewrote it. Bright, colourful, playful, catchy and bold, this was technicolour pop perfection, a declaration to the world.

Lets go back to the original that I never knew existed!

It's kind of new wave punk, not very good, the pop qualities that Lauper and her team brought out are kind of hidden away. Listening to Hazard's version is like listening to a cover. It's kind of like someone to sound like a cross between The Clash and Blondie by way of Elvis Costello, but not managing it.

The qualities of the song are there, but the hooks are not emphasised. Hazard is singing to his parents that he's been out all night with girls who just wanna have fun with him. The band tear through it too quickly, missing the fact that the playful backing vocals near the end are a real hook. 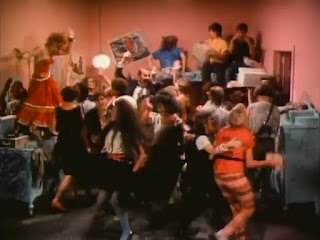 Lauper destroys the original, her version is pulsating with energy, with vibrancy and with (ironically) originality. If Hazard was modelling his version on bands/sounds of the time, Lauper and her production team (who deserve immense credit) pull out all the stops to make Girls Just Wanna Have Fun sound like absolutely vital pop music.

Lauper finds the hooks and plays with them, the little section after the second chorus being the first example, but its the after the third chorus that the hooks of the song are hammered home - time after time ... for over 2-minutes.

And in the video, Lauper and her girls are having fun, dancing through the streets of New York City back to Lauper's bedroom for a big party that looks like great fun.

I really enjoy researching songs for this regular feature, this month I'm just blown away that this wasn't written by Lauper, or specifically for her. She just totally makes it her own.

Note - the orginal version of the song isn't on Spotify;

Some boys take a beautiful girl/And hide her away from the rest of the world/I want to be the one to walk in the sun/Oh girls, they want to have fun.”

Lauper, in her own words says

“I left home at seventeen,” she wrote. “I took a paper bag with a toothbrush, a change of underwear, an apple, and a copy of Yoko Ono’s book Grapefruit.”

female subjects. Lauper found the lyrics to be misogynistic, and took it upon herself to rewrite them from a female perspective, rearranging it into the song heralded today as “an anthem of female solidarity.

"Girls Just Want to Have Fun" is a song written and performed by American musician Robert Hazard who released the single in 1979. It is known as a single by American singer Cyndi Lauper, whose version was released in 1983.[1] It was the first major single released by Lauper as a solo artist and the lead single from her debut studio album She's So Unusual (1983). Lauper's version gained recognition as a feminist anthem and was promoted by a Grammy-winning music video. It has been covered, either as a studio recording or in a live performance, by over 30 other artists.

The single was Lauper's breakthrough hit, reaching number two on the US Billboard Hot 100 chart and becoming a worldwide hit throughout late 1983 and early 1984. It remains one of Lauper's signature songs and was a widely popular song during the 1980s. The "Rolling Stone & MTV: '100 Greatest Pop Songs': 1-50", "Rolling Stone: "The 100 Top Music Videos"" and the "VH1: 100 Greatest Videos" lists ranked the song at No. 22, No. 39 and No. 45, respectively.[2][3][4] The song received Grammy Award nominations for Record of the Year and Best Female Pop Vocal Performance. In 2013, the song was remixed by Yolanda Be Cool, taken from the 30th anniversary reissue of She's So Unusual.[5]