Isn't It A Pity 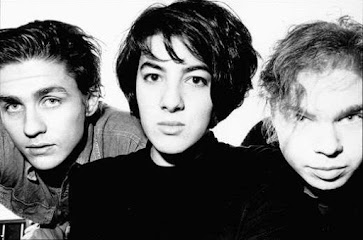 Missing Records was a regular haunt of mine. I'd soak up interviews and reviews in the NME and Melody Maker and then head into Missing, often buying records on the strength of a review, occasionally I might have heard something on the Evening Session or John Peel's show.

From memory, it might have been a school friend Grant Mitchell who turned me on to Galaxie 500. We would regularly exchange mixtapes and Grant was developing an incredible knowledge and passion for American independent guitar bands. I'm pretty sure he put a couple of Galaxie 500 songs on a tape for me. 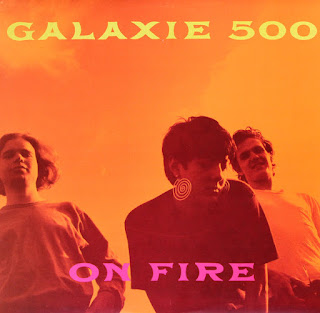 On Fire is an album I fell for instantly. It contained so much of what I was looking for as a teenager, mainly that the band looked and sounded super cool.

Listening back to it now, all these years down the line, it is an album that contains a lot of honesty. In the playing, lyrics, delivery, production and in their choice of cover versions.

I featured Galaxie 500's cover of New Order's Ceremony way back in January 2017 as #21 in this feature. Now it is the turn of their take on George Harrison's Isn't It A Pity.

The opening chords sound raw and almost beautifully amateurish, similar to sounds I was making with my first electric guitar in my parents garage.

Harrison's poetic lyrics take on a new kind of emotional rawness when sung by Dean Wareham as he strains soulfully over glorious warm guitars that are reminiscent of The Velvet Underground at times, of Neil Young at others.

This cover version really melts my heart. The rhythm guitar remains tenderly fragile but steady throughout, then at times the lead guitar just lets rip, while Damon Krukowski hammers his drums and Naomi Yang on bass keeps it all together.

Wareham sings and wrings his heart out in the closing what a pity refrain, and he does a pretty similar job with his guitar. This is a song and performance that moves me every time I hear it. 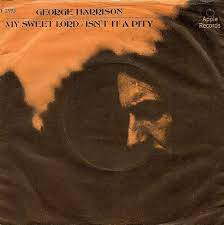 Isn't It A Pity was originally released on George Harrison's epic 1970 album All Things Must Pass, also as a b-side to My Sweet Lord, Stretched to 4-minutes, Harrison pours himself into the song with what I consider to be his most soulful and emotional vocal on the album.

Remarkably, Isn't it A Pity had been around since the days of Revolver! Rejected for Sgt Peppers, Harrison then hoped to record it for The White Album before representing it during the Let It Be sessions. This is pretty staggering! Perhaps it wasn't completed until after the demise of The Beatles.

The production is remarkably different. This is Phil Spector working with a Beatles style budget, there are strings, there is multiple percussion, loads of rhythm guitars, a choir, multiple pianos playing at the same time ... possibly Spector's biggest ever wall of sound. It might not create the ferocious glorious racket of River Deep Mountain High, but Harrison & Spector (co-producing) create one of the most beautiful songs Harrison wrote and released ... and he wrote some gems!

Not one single second of the 7-minutes 10 seconds of Isn't It A Pity is wasted. Harrison pours his heart out in the lyrics and his voice is racked with emotion, like he is genuinely pondering some of the questions he is asking in song, the very moment he is singing them.

some things take so long, but how do I explain

when not too many people

can see we're all the same?

and because of all their tears

their eyes can't hope to see

the beauty that surrounds them

The song is extended with Harrison repeatedly singing and stating what a pity, his guitar sings, there is a choir, everything has built to this point and it just keeps going, everything sounds so perfect, the arrangement is simply stunning.

Harrison and Spector weren't finished. There is a second version later on the album, slower, the band feeling things out in a jam at the start, the bass central to the sound, Harrison's voice strains beautifully when he sings and because of all their tears, the backing vocals are angelic and then at 2-minutes 19 seconds the song is lifted to the heavens - I can imagine The Polyphonic Spree might have fallen in love with this section. 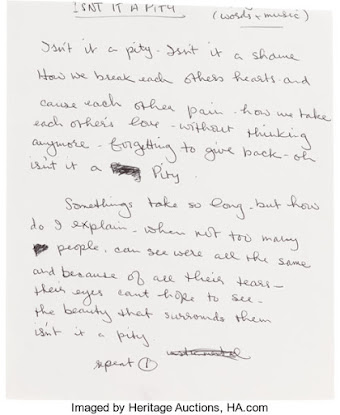 The original lyrics for Isn't It A Pity
Isn't It A Pity is songwriting, musicianship and performance at it's very best. Galaxie 500 were brave to take it on and deserve huge credit for their own stunning version.
Speaking of stuning versions. Nina Simone recorded a spine tingling 11-minute version! You can check it below or on my cover version of the month playlist on Spotify. (Everything Flows - cool cover versions).
You'll find links to all previous cover version of the month blogs below.