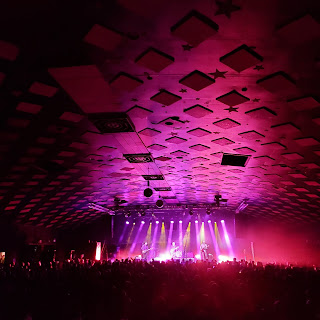 I was so excited about returning to this iconic venue that I showed up for doors opening. I've probably not done that since visiting for the first time back in 1993 - also to see Teenage Fanclub.

Just grabbing a beer and walking round the iconic ballroom listening to background music while watching everyone coming in heightened my senses. I'd missed this kind of thing so much; the sense of anticipation, an occasion, a special night out. 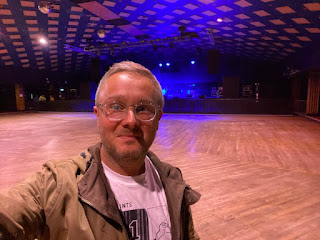 Pretty soon I was catching up with friends - Lorna (my real Teenage Fanclub buddy), Lloyd from Olive Grove Records, John from my hometown of Carluke and loads of people from the Teenage Fanclub Fanclub.
It was great to see loads of people coming in early for Poster Paints who delivered another impeccable set. Carla sung beautifully and it was brilliant to see her on the Barrowland stage. Number 1 sounded particularly powerful and the response from the crowd was warm and loud. Set closer My Song was glorious, building into a dreamy New Order groove, low bass, synth and the kind of guitar riff you could listen to for days.
Poster Paints play their debut headline show at The Poetry Club in Glasgow on October 7th. Be great to see you there. 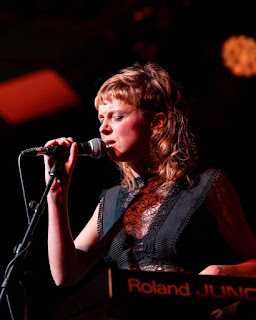 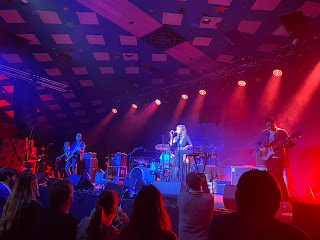 Shortly after 9pm Teenage Fanclub walked on to the stage to a huge Barrowland roar and after strapping on their guitars they launched into the double header of About You and Start Again. The band were in excellent form, it's a shame that this little run of shows has come to an end just as they are really getting going. I found myself checking dates for their shows next Spring earlier today.
A run of 3-songs from Endless Arcade really highlighted that the band are on form on record and on stage. Everything Is Falling Apart and Home both allowed the Fannies to stretch out and flow. Dave and Francis were locked in tune all night, allowing their mates to jam on and extend a number of songs. 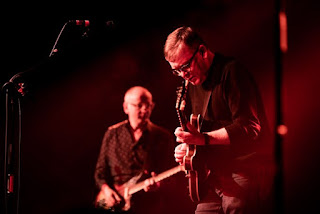 Photo by Kat Gollock
Home was outstanding last night, the guitars sounded glorious, I love when the band play like this. Then there as an absolute romp through Warm Embrace, quickly becoming a live favourite for band and audience.
What You Do To Me was particularly euphoric last night, sung gustily on stage and on the famous sprung ballroom floor. It felt so uplifting to be in the Barrowland and singing along with friends and strangers.
Closely followed by Raymond's outstanding Your Love Is The Place Where I Come From, with Norman playing his xylophone to huge cheers.
Back In The Day was another highlight, the band extended it, clearly enjoying playing it live and there was a nice moment afterwards where someone near the front shouted his appreciation to Norman, adding 'that's a corker' raising a smile from Blake. 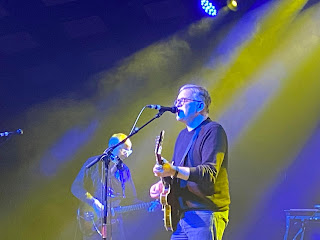 There were regular smiles on stage and off all night. We were standing just a few rows from the front to Dave's side and you could see the energy being created and enjoyed on stage.

I'm In Love had a real zip to it, while the closing section of The Concept was simply sublime, just absolutely gorgeous.

Raymond's The Fall started the 4-song encore, the outro section sounding particularly dreamy and beautiful, then we had Norman tugging on heartstrings with his stunning The Sun Won't Shine On Me, the guitar riff was heavenly. 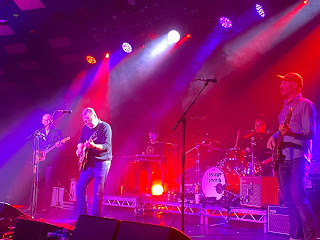 Norman then announced they were going to play a cover version by an 80's band ... going on to play Golden Shower by The Boy Hairdressers, his pre Fanclub band with Raymond.

Ending with Everything Flows, I was really taken with the way Euros added a hammond style riff to the song. He has brought a lot to the band and seems to have quite a free license to add bits to songs, while his harmonies with Norman are so natural and beautiful. Norman waved his guitar in front of his speaker to generate feedback, just lost in the moment, it was so good to see.

It was good to be back!

I must mention the Simply Thrilled Aftershow at McChuills round the corner on High Street. Walking into my favourite bar to the sound of Rocks by Primal Scream was so uplifting. Pretty soon they played Radio and a few people started dancing. The boys got the hint and it was Fanclub tunes until closing with a group of us singing and dancing like the good old days to Baby Lee, I Need Direction and of course - Everything Flows to close. I felt absolutely elated! 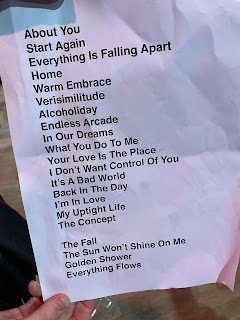