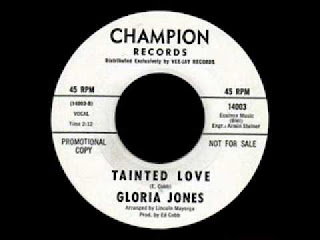 Tainted Love is a song that instantly reminds me of McChuills, my favourite pub in Glasgow. I was something of a regular circa 2001-2010 and at the end of a Friday or Saturday night Tainted Love would often be one of the last songs played, causing those remaining to dance on the small stage or occasionally on tables.

McChuills would play the original version by Gloria Jones, released back in 1965 as the b-side of My Bad Boy's Comin' Home, an obscure single that failed to chart on either side of the Atlantic.

However, as anyone with the faintest of interest in Northern Soul will know, British DJ's obsessed with Motown and soul music would soon be taking trips to America and scouring record shops and warehouses for singles - bringing them home and playing them at clubs like the Wigan Casino. Ian Levine was perhaps the most famous, coming home from trips to Miami and New Orleans with boxes of records. Levine and others would often cover the label of their records, so fans and other DJ's couldn't try and track down their own copies.

However, in the case of Tainted Love, it was the DJ Richard Searling who bought a copy of the single in 1973, flipped to the b-side and played it in Va Va's in Bolton and then at the Casino.

It's not hard to hear why Searling and the northern soul crowd fell so hard for Tainted Love; the blast of horns from the very start ushers in a constant walking bassline, a driving Motown beat and a hard rhythm guitar, handclaps and soaring vocals with cool backing vocals. 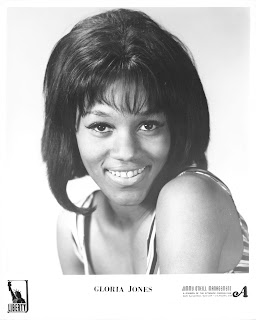 From the Michael Ochs archive

The lyrics, written by Ed Cobb, tell the tale of a girl looking to get away from an old love that has become tainted. They are written in an incredibly open and graphic way.

Sometimes I feel I've got to, run away,

I've got to, get away from the pain you drive into the heart of me

What an opening couple of lines! Cobb, through Jones voice, tells of how the love was going nowhere, the lights been lost and the realisation is causing sleepless nights. The lyrics, throughout the song, are sheer poetry.

Then the chorus, another couple of incredible lines to open it;

Now I run from you (Now I run)

The tainted love you're giving

I gave you all a girl can give you

The second verse just emphasises the first, the second chorus sounds more definite and then there is glorious bridge into another chorus.

I know you will hurt me so

If I do not pack my bags and go

The song begins to fade at only 2 minutes 10 seconds with Jones voice at its best. Jones rerecorded Tainted Love in 1976 following the love displayed to the song through the northern soul scene, but it is a poor version in comparison to the original, the kick, the urgency, the hurt and the soul (the very essence of the song) just isn't there. 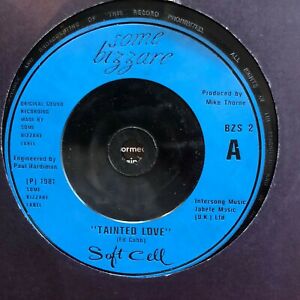 A few years down the line, in 1981, Marc Almond and David Ball, otherwise known as Soft Cell, recorded Tainted Love and it was released as their second single on Sire/Warner Bros. The duo reached number 1 after a theatrical front man performance by Almond on Top of the Pop pushed the song towards the top.

It's amazing how Soft Cell deconstruct the song. They keep the structure but remove horns, guitar, bass and drums, replacing them with synths and drum machines.

Originally written by a man, it's now sung by a man, it's interesting to hear it from a male perspective, with Almond singing I gave you all a boy could give you , even more so as Almond was openly gay - not something that was very common in 1981. So it added another dimension to the song that comes across in the video as Almond sings touch me baby tainted love towards the end, his eyes mirroring his suggestive vocals.

The Soft Cell version is a bold and brilliant cover version, but for me the original is unsurpassed, it has a zip and energy that can't be replicated or bettered.

Soft Cell Top of the Pops

A genuinely brilliant cover of a brilliant original - another great choice, Murray. I didn’t know till a few years back that Gloria Jones was Marc Bolan’s girlfriend (they had a son together) and she was the driver of the Mini they were in together when they crashed and hit a tree in the early hours of September 16th 1977, killing Marc.