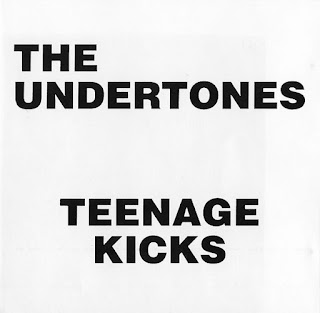 The Undertones began playing Teenage Kicks, written by guitarist John O'Neill, in 1977, recording it as a demo in early 1978. The tape was sent to a number of record companies and to John Peel at the BBC.

Legend has it that Peel burst into tears upon hearing the song, not only playing it on his show, but offering to pay to send the band into a studio, in June 1978, to record it properly. Released on Belfast label Good Vibrations (check the film), Peel played the song again, Seymour Stein from Sire Records heard it and promptly (after his A&R man watched the band on their local turf) signed the band for £10,000. By October 78 the band were playing it on Top of the Pops - VIDEO 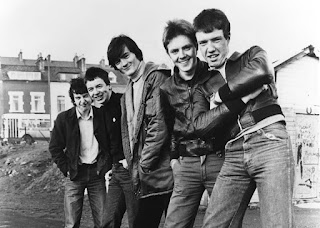 Peel often noted the song as his ultimate favourite (and he had heard a lot of songs!), even having the lyrics inscribed on his gravestone.

Lets get into the song. It really is power punk pop perfection. Slamming into a ferocious guitar riff, The Undertones roar through verse-chorus-verse-chorus in under a minute, beginning with the incredible line a teenage dream's so hard to beat.

Teenage lust, desire and innocence pour out of the song. Fergal Sharkey delivers an exceptional vocal performance, audibly shaking with intensity at times and I still love the way he yells alright after the second chorus, into a short 15-second instrumental - just the same driving power chords.

Teenage Kicks is simply sensational and must surely be one of the best debut singles of all time.

You can also read about the previous songs I've written about by clicking on the links below, underneath the lyrics.

A teenage dream's so hard to beat

Every time she walks down the street

Another girl in the neighbourhood

Wish she was mine, she looks so good

I'm gonna call her on the telephone

Have her over cause I'm all alone

I need excitement, oh I need it bad

And it's the best I've ever had