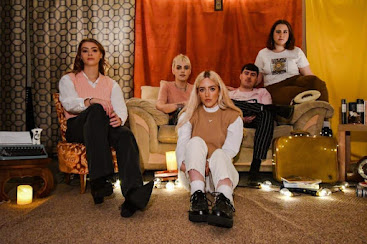 Back at the start of July my friend Steven posted a video on his Facebook page saying that his daughter Eva had formed a band. Steven has impeccable taste in music (a real mod and northern soul fanatic) so I clicked to watch the video (see end of blog) he had linked.

And I was impressed! Brontës looked great and sounded superb, playing two original songs; First Hand Arrogance and Down To You, sandwiching a cover version of Shakira's SheWolf in between!

I found myself replaying the performance a couple of times, realising how much I was missing getting out and about in Glasgow to hear guitars and watch cool young bands. They just looked in the zone, locked into grooves, cool vocals, but also having that edge of this - this is us. They weren't trying too hard, like many bands do.

First Hand Arrogance has real tight groove, allowing the two guitars to drive things along over the top of it, in a kind of punk Chic style, going all rock for the chorus in a quite delicious way over a come and get it, first hand arrogance hook.

Down To You starts of really playful; musically and melodically, reminding me a little bit of early Vampire Weekend, but the vocals are just beautifully dreamy, the duelling guitars work so well - one all scratchy punk funk, the other picking out a kind of dancey riff.

I thought I'd find out a little more ahead of their first ever gig, taking place at King Tuts this Thursday with Spyres - who I also intend to feature in a future blog.

How did the band form? How did you get to know each other?

Yana and Amelia started the band after finishing college in 2019. Erin, Jon and Eva joined a little bit later. We're from different places out and around Glasgow and we met through college / university / going out.

How did you start creating music? Does anyone take lead on writing? Or do you jam ideas?

We all study music and wanted to be in a band. We take turns writing lyrics but jam the music together. 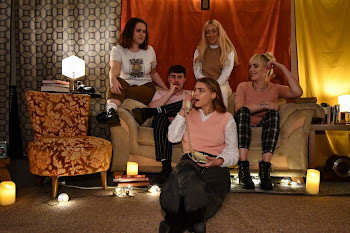 Do you take influences from any bands? What do you all listen to?

You're about to play King Tuts, is this your first ever gig? How are you feeling about it?

Yeah, it's out first gig as a band and we're really excited and a bit nervous to play to a crowd, but we can't wait to get out there and cut our teeth.

You launched Brontës with a recording of a live session performance. What gave you that idea?

We share a studio with Weekend Debt and Stoned Immaculate and Crowded Flat use the space to record their sessions. We were asked to record one and thought it was a different way to launch our sound and see the reaction we got ... which was overwhelmingly positive.

And this prompted Last Night From Glasgow to sign you up. Will you be releasing anything soon?

It was a total shock to be signed as quick as we were and we're so thankful to LNFG for picking us up and giving us the opportunity. We're in the studio soon and should hopefully have a single out in the near future.

So much is changing, but do you have any more shows planned? Or anything else for the rest of the year.

We have a couple of shows coming up towards the end of the year, so keep an eye out and make sure to come along. We'll be spending a lot of time in the studio writing new material and recording.

CLICK HERE to watch the Brontës Crowded Flat session if you don't see the video below.

What Katy Did said...

Just heard them on Totally Wired Radio and found this article too! Many thanks for the heads-up on them!!