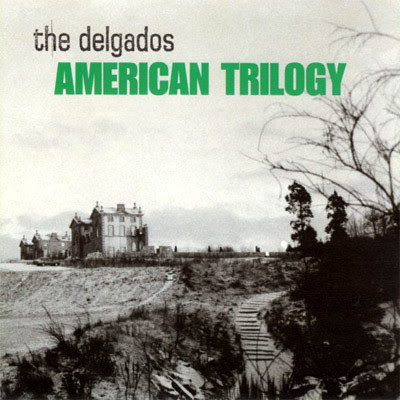 Trust me # 47
American Trilogy by The Delgados

The Delgados developed their own art form rather beautifully over the years. Improving as songwriters and musicians, working in different producers and bringing in extra musicians. In addition to the band, Alun Woodward, Emma Pollock, Stewart Henderson and Paul Savage starting their own label Chemikal Underground and opening their own studio CHEM19 allowed them to be fiercely independent and also release records by the likes of Mogwai, Arab Strap, De Rosa and BiS!

I've enjoyed revisiting The Delgados back catalogue in advance of their Barrowland show on 25th January. The four friends were clearly burning bright with creative energy. 5 albums in just 8-years (1996-2004) is pretty prolific. There is great beauty and depth across this body of work and, for me, one of the real standouts is American Trilogy.

The lyrics, delivered in a gorgeous tumbling melody, to the first couple of verses are confessional, therapy, a call for help and then the chorus explodes gloriously with a realisation.

It's the simple things that crush

And I'm crying far too much

So much that I'm thinking

My control on life is shrinking

All the freedom in my brain

I'm just thinking, what to say

The third verse is darker, yet with Pollock gently singing under Woodward the beauty remains. Suicidal thoughts are there, then the chorus kicks back in, the uplifting melody with soaring strings makes you think - yeah he's gonna be OK. We're gonna be OK. We can live with it. We can get through it.

But lately I've been feeling that I'm gonna give up breathing

All the fever in my brain

It's alright now, I can even take the pain

The Great Eastern (2000) was produced by Dave Fridmann. In the previous years he produced Soft Bulletin by The Flaming Lips (1999) and Deserters Songs by Mercury Rev (1998). It's an astonishing trilogy of albums - no pun intended! Fridmann also produced Mogwai's Come On Die Young in 2000.

Check the official video for the edited single, full length album version and a brilliant live performance for the BBC below.

Live for the BBC

A list of all previous songs I've blogged about in my Trust Me feature are listed below, along with links to each blog. American Trilogy join them.

1. Something On Your Mind by Karen Dalton
1A. Crimson and Clover by Tommy James and the Shondells
2. I Am, I Said  by Neil Diamond
3. Where's The Playground Susie?   by Glen Campbell
4. If You Could Read My Mind by Gordon Lighfoot
5. Gimme Some Truth by John Lennon
6. Gone With The Wind Is My Love by Rita and the Tiaras
7. In The Year 2525 by Zager and Evans
8. The Music Box by Ruth Copeland
9. The Ship Song by Nick Cave
10. Sometimes by James
11. I Walk The Earth by King Biscuit Time
12. Didn't Know What I Was In For by Better Oblivion Community Centre
13. When My Boy Walks Down The Street by The Magnetic Fields
14. The Man Don't Give A F**k by Super Furry Animals
15. All Flowers In Time Bend Towards The Sun by Jeff Buckley and Liz Fraser
16. Are You Lookin' by The Tymes
17. A Real Hero by College & Electric Youth
18. Feelings Gone by Callum Easter
19. Sunday Morning by The Velvet Underground
20. Did I Say by Teenage Fanclub
21. Don't Look Back by Teenage Fanclub
22. Your Love Is The Place Where I Come From by Teenage Fanclub
23. Belfast by Orbital
24. Clouds by The Jayhawks
25. Dreaming Of You by The Coral
26. Everlasting Love by Love Affair
27. Walk Away Renee by The Left Banke
28. Teenage Kicks by The Undertones
29. Shaky Ground by Sneeze
29. Rill Rill by Sleigh Bells
30. I Can Feel Your Love by Felice Taylor
31. The State We're In by The Chemical Brothers w/ Beth Orton
32. Sunshine After The Rain by Ellie Greenwich
33. Losing My Edge by LCD Soundsystem
34. Mondo 77 by Looper
35. Les Fleurs by Minnie Riperton
36. Rat Trap by The Boomtown Rats
37. How High by The Charlatans
38. I Can't Let Go by Evie Sands
39. Pop Song 89 by R.E.M.
40. Summertime Clothes by Animal Collective
41. There She Goes by The Las
42. We're Going To Be Friends by White Stripes
43. Autumn Sweater by Yo La Tengo
44. Sister Rena by Lomond Campbell
45. Revolution by The Beatles
46. Lazarus by The Boo Radleys