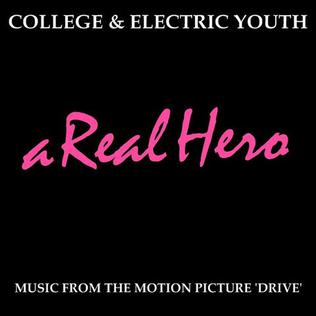 I was in the old Captain's Rest on Great Western Road when I first heard this song. It was one of those 'what the f**k is that?' moments as it drifted up the stairs to where I was working the door for a friends band. I abandoned my post to go downstairs and listen.
The continuous synth bass pattern was infectious, the crystal clear vocals were sublime, the little synth riffs were all kinds of dreamy gorgeousness and I was just lost in wonder for a few minutes as the song played out the PA.
Afterwards I went up to Gerry Blythe who was DJ-ing and asked him what on earth he was playing.
Upon seeing the film, I fell even deeper in love with the song. A collaboration between French electronica artist College and Electric Youth.
Austin Garrick (Electric Youth) was inspired to write A Real Hero by a quote from his Grandfather, who spoke of airline captain Chesley Sullenberger after the US Airways Flight 1549 water landing incident in January 2009, referring to Sullenberger as "a real human being and a real hero" which became the songs refrain. The song also includes the line "155 people on board" which refers to the survivors.
Meanwhile College (David Grellier) said that he took inspiration from cinema and in particular the kind of lone hero from the Mad Max series.
It's an exceptional song, both music and vocals create a really emotional feel to it and that is amplified when you see it in the film on the big screen. The song and lyrics fit absolutely perfectly.
Check a live performance and the recorded version below.
And all of the songs in the Trust Me series (listed below) feature on the Everything Flows Trust Me playlist on Spotify. Search for that or click HERE

1. Something On Your Mind by Karen Dalton
1A. Crimson and Clover by Tommy James and the Shondells
2. I Am, I Said  by Neil Diamond
3. Where's The Playground Susie?   by Glen Campbell
4. If You Could Read My Mind by Gordon Lighfoot
5. Gimme Some Truth by John Lennon
6. Gone With The Wind Is My Love by Rita and the Tiaras
7. In The Year 2525 by Zager and Evans
8. The Music Box by Ruth Copeland
9. The Ship Song by Nick Cave
10. Sometimes by James
11. I Walk The Earth by King Biscuit Time
12. Didn't Know What I Was In For by Better Oblivion Community Centre
13. When My Boy Walks Down The Street by The Magnetic Fields
14. The Man Don't Give A F**k by Super Furry Animals
15. All Flowers In Time Bend Towards The Sun by Jeff Buckley and Liz Fraser
16. Are You Lookin' by The Tymes