Colonel Mustard and the Dijon 5 at Oran Mor

The January Blues can hit pretty hard. What better way to banish them then to dance, sing, laugh and smile with the party machine that is Colonel Mustard and the Dijon Five?

I've caught CMD5 a number of times over the years, but the last time was pre-pandemic at a Celtic Connections show at the Old Fruitmarket back in January 2020.

3-years on and CMD5 are as bright, colourful and inventive as ever. I had so much fun that I never counted how many people were in the band. I'm guessing 10; 3 in the horn section, drums, bass, guitar, keyboards, effects/samples plus the effervescent Fathom and the good Colonel John McMustard leading the band and crowd through a 80 minutes of partying.

Colonel Mustard and the Dijon Five win friends and hearts wherever and whenever they play. They have built a huge community from wowing people at festivals, leading to huge shows at the Barrowland and the Academy in Glasgow ... alongside trips to Korea.

Their infectious energy transfers to the audience. The cost of living crisis, the climate crisis, the energy crisis ... the Tories ... for 80-minutes yesterday afternoon people forgot about their worries.

Everyone was happy, everyone was smiling, no-one in Oran Mor was sad anymore.

And that is the beauty of Colonel Mustard, that is the power of music. What was extra special was that this was a matinee show, so it was a real family affair. The four of us went and I would love to see more matinee/family friendly shows across the city in the future. 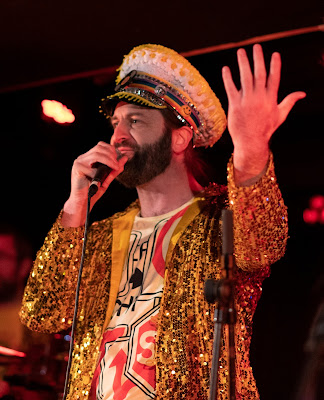 CMD5 have built quite a selection of crowd pleasers over their 2 albums. Taking in disco, funk, pop, reggae, ska and adding a dash of Screamadelica and a sprinkling of humour while appreciating the importance of audience engagement and participation.

We crossed The road (not quite as easy as it is in a festival field, had a dance off (2 kids won inflatable trophies), batted balloons around the room, sang the praises of ginger girls, aaaarrrrggghhhhed as pirates and rrrrrroooooaaaaarrrred as dinosaurs, danced like no-one was watching, bounced like bouncy balls, had a house music rave (This Is Your House was a real favourite) and unified as one to preach peace, love and mustard. 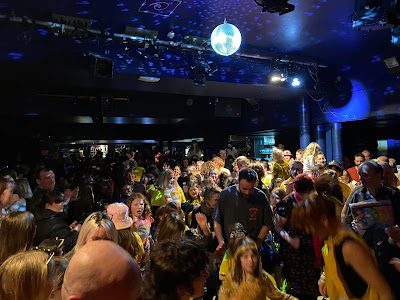 The imagination of John McMustard to write the songs, develop the concept of CMD5 and their Yellow Movement, include humour with reflection and politics, while creating a party vibe is pretty incredible. And it's ambitious. It can't be easy to keep a 10-piece band on the go! But everyone has fun and fun can keep many things going and make everything easier.

I would heartily recommend seeing CMD5 live if you can. Keep an eye on their socials for festival announcements and a Christmas show - they hinted about that on stage. Hopefully there will be a matinee show. 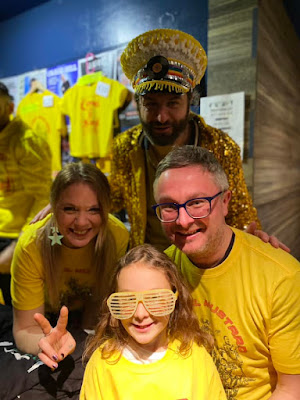