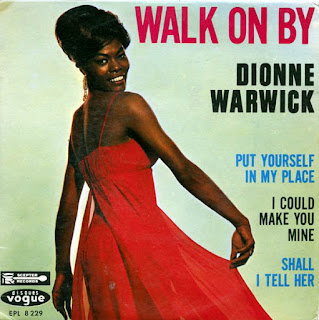 Cover version of the month #68

I've recently been enjoying listening to the lush arrangements of Isaac Hayes, digging into his back catalogue and marvelling at his exceptional recordings, style and delivery. In addition, I've also been making a series of 60-minute playlists/mixes and one that I'm working on opens with his sensational version of Walk On By.

We'll come back to that though, lets get back to the original. Composed by the legendary partnership of Burt Bacharach and Hal David in 1963, Dionne Warwick recorded the song in the December of that year, releasing it in 1964.

It's a stunning example of what can be delivered through a 3-minute pop song. Warwick begins singing in 5-seconds and by the end of the first delivery we know exactly what the song is about - a broken heart, someone who hasn't got over it.

If you see me walking down the street

And I start to cry each time we meet

Heart strings are tugged on the second verse

Make believe, that you don't see the tears

In private, cause each time I see you

I break down and cry

The piano melody introduced as Warwick sings cry is just simply sublime. Strings are then introduced for the third verse

I just can't get over losing you

And so if I seem, broken and blue

Bacharach really does conjure a masterpiece with his arrangement,  the little (don't stop) backing vocals that he brings in after each walk on by as the song develops. David matches it with his lyrics.

There is a short instrumental from 1 minute 43 seconds to 1-minute 56 seconds, that almost fades to nothing, then Warwick comes back in singing like an angel foolish pride, that's all I have left, so let me hide, the tears and the sadness you gave me, when you said goodbye.

Warwick lifts the song for the closing section, as she twists the melody beautifully, injecting more pace in between the glorious don't stop backing vocals.

Walk On By is an absolute masterpiece of a song, pop perfection. Check the live version below - Warwick looks incredible, oozing confidence and belief.

Dionne Warwick - Walk On By 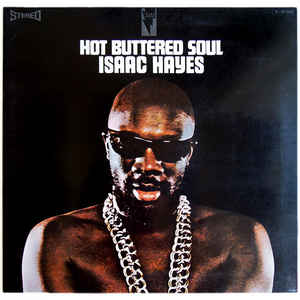 5-years later, in 1969, Isaac Hayes chose Walk On By to open his Hot Buttered Soul LP, an album that came to my attention in my younger days as artists like Massive Attack and Portishead would rave about it (and mine it and other Hayes songs for samples).

Hayes quadruples the length of the song! So he has plenty of time to stamp his own mark on it!

The instrumental intro is over 2-minutes long, the strings pull you in immediately, like your heart strings are actually being played. Hayes and his band slow things down to bass and drums, there is fuzzy electric guitar piercing the air, leading to psychedelic sounds, all over a heavy funk bass and groove.

Things build again before Hayes begin singing in a hushed voice, changing the melody to suit him, he really does sound broken-hearted.

Heavenly backing vocals are introduced, the guitar could cut the air like a knife at times, it's lovingly fuzzy at others, strings are punchy at times, soaring at others. If Warwick's version is a 3-minute pop masterpiece, then Hayes cover is an impeccable example of what you can do if you have the space, time and budget to let your imagination run wild.

Hayes sings with such care, I particularly love his vocals when he sings of tears and the sadness, backed by his glorious backing singers, who are just as important to this song as Isaac himself.

You think it's coming to an end at 7-minutes and then it is lifted, the strings take centre stage, the drums pick up the pace and Hayes begins to play with the walk on by melody.

A hammond organ is introduced to the jam after 9-minutes as the strings are eased out, the guitar kicks in, it's simply wonderful music. I imagine this was all cut live and the tape just kept rolling - sublime. 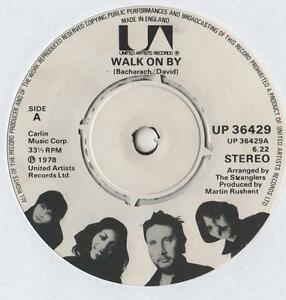 In 1978 The Stranglers covered the song, stamping their own take on things by speeding and (post) punking things up, injecting a sense of urgency through Hugh Cornwell's vocals before taking the song on a completely different direction thanks to an extended instrumental section, pinned down by a throbbing bass that allows keyboard and then guitar to go a little crazy.

This lasts from 1-minute 26 seconds when, after the last walk on by, Cornwell ad-libs I'm just going for a stroll in the trees, through to 5-minutes 34 seconds. I love the harmonies The Stranglers introduce at all the right times. It's an outstanding cover version, there is a real edge to it

Check below for a full list of songs to feature in my cover version of the month blogs. You can also search for Everything Flows Cool Cover Versions for my Spotify playlist or CLICK HERE.

The Stranglers on Top of the Pops