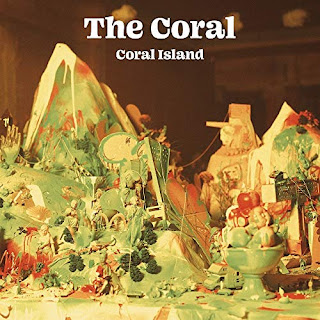 The Coral have had quite a journey since bursting on to the scene 20-years ago; key members have left, there have been breakdowns, label changes, commercial and critical success and all the while the band have remained true to themselves; producing psychedelic pop and not really caring about what anyone else was doing or saying about them.

A recent Mojo feature took a deep dive into where the band have been (and there were some dark, dark days) to where they are now, releasing their 10th album Coral Island. It feels like a landmark in more ways than one.

Positive reviews have been coming in thick and fast, potentially taking some (even the band) by surprise.

'To say we're overwhelmed with the reaction to Coral Island would be an understatement. If you'd told us last month that a psychedelic double album about an imaginary seaside resort would push the top end of the charts we wouldn't have believed you.' @thecoralband 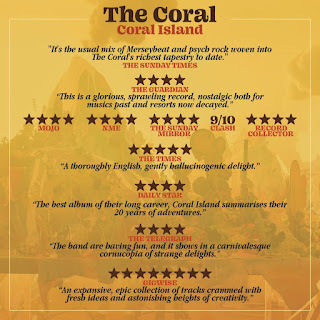 The Coral deserve all the praise coming their way. They have played to their strengths, but they have pushed themselves, creativity bursts out of the songs, the album and the theme.
Ah, the theme. The band are quick to stress that this isn't a concept album, but a theme, stemming from their youth and visits to the seaside, in the case of singer James Skelly, his family were often working.
There is a warm glow of reflection throughout the album, beginning with a narrative by Skelly's grandfather;
On coral Island you can fall in love
On the piers and promenades
On the boardwalks and bridleways of innocent dreams
Lover Undiscovered then kicks in with warm guitars and Skelly's voice sounding tender yet confident. The song builds beautifully; verse, bridge and then a chorus full of melodies and harmonies. Each of the 3 bridges to the chorus is different, I particularly love the lyrics in the second one.
And when her hair hangs down
It's like the sun touching the tides
What a gem of a song. It flows superbly, there is a glorious little rhythm guitar riff throughout that allows some excellent keyboards and vocal melodies over the top and also an outrageously brilliant little guitar solo.
Lover Undiscovered video 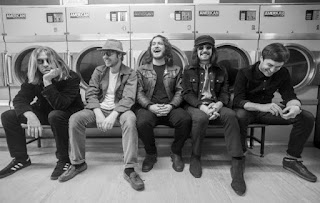 The Coral are straight into Change Your Mind, another warm melodic burst of guitar pop. What a glorious opening to the album. Things slow down a little for Mist On The River allowing a little more of The Coral's psychedelic side to shine through. They do this again on the beautifully dreamy The Game She Plays, also on Autumn Has Come, though this has a jauntiness that mixes with the melancholy.

Elsewhere My Best Friend is a real favourite of mine, melodies just come tumbling out in a song that is pure an flowing. Golden Age sounds reflective, even though it is sung in present tense, while Take Me Back To The Summer Time could easily pass as a lost Super Furry Animals song.

There are 24-tracks on the album, 9 are spoken word interludes. There is a lot to take in and although some stand out, you're rewarded after a few listens, you appreciate the melodies, the musicianship, the imagination and spot the influences. The Calico Girl, for example, is pure Paul McCartney.

All in all, I couldn't help but fall for Coral Island. There is a lot of charm, loads of melodies, you can hear and sense the band are at ease and enjoying themselves and they've pushed themselves and their audience a little with their ambition. Many bands will be chomping at the bit to get back to playing live, given the reaction to this album, The Coral's bookers might be considering bigger venues. 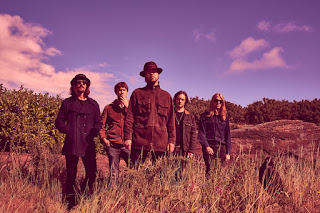