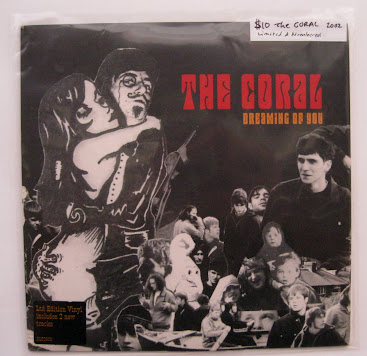 I'll be blogging on The Coral's fantastic new album Coral Island next month.

Before then, I thought I would write a bonus Trust Me blog on their 2002 single Dreaming Of You after watching a sensational performance from Later with ... Jools on the iPlayer.

CLICK HERE if you can't see the video embedded below.

Dreaming Of You is a 2 minute 20 second slice of pop perfection, brimming with the confidence of a band totally in the zone, full of complete belief in their playing style and talent.

A funky bass riff introduces a rhythm that could easily have been influenced by skiffle, with a melody played on an organ/keys and then over the top of that are glorious backing vocals and the voice of James Skelly.

The Coral make full use of their 100 seconds. At 1-minute 25 seconds an 'oh yeah' introduces an instrumental section with xylophone and yearning backing vocals until 2-minutes when Skelly comes in with a final chorus.

Only 22 upon release, Skelly displays raw and rich soul in his vocals that portray love and lust mixed with realisation and honesty. Look at the incredible Later footage above, he is totally going for it, his band are totally on it, they are all in the zone. They look like a real gang, Bill Ryder-Jones on guitar, still in his teens, looks cool as a cucumber, they all look unphased to be on the Beeb's flagship music show, determined to use their time and smash it out the park. They do!

The first verse is only 2 lines, straight into the chorus that ends with a bitter kiss off.

Up in my lonely room

When I'm dreaming of you

Oh what can I do

I still need you

But I don't want you

The second verse is doubled in length, Skelly has realised it's gonna hurt, but I'm gonna have to say goodbye. Then it's into the instrumental before one final rasping chorus.

Dreaming With You is a glorious burst of pop soul, everything you could want from a band in their teens and early 20's. Unfiltered, heartfelt music delivered with urgency and passion by a band who have always been in their own bubble, as beautifully demonstrated on their new album. Check the original video HERE

You can also read about the previous songs I've written about by clicking on the links below. 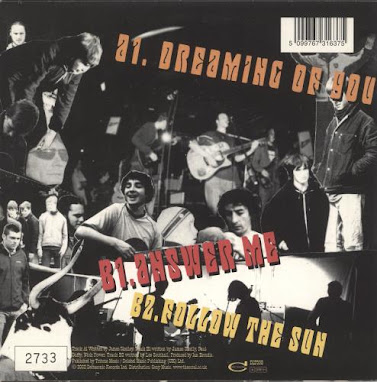 1. Something On Your Mind by Karen Dalton
1A. Crimson and Clover by Tommy James and the Shondells
2. I Am, I Said  by Neil Diamond
3. Where's The Playground Susie?   by Glen Campbell
4. If You Could Read My Mind by Gordon Lighfoot
5. Gimme Some Truth by John Lennon
6. Gone With The Wind Is My Love by Rita and the Tiaras
7. In The Year 2525 by Zager and Evans
8. The Music Box by Ruth Copeland
9. The Ship Song by Nick Cave
10. Sometimes by James
11. I Walk The Earth by King Biscuit Time
12. Didn't Know What I Was In For by Better Oblivion Community Centre
13. When My Boy Walks Down The Street by The Magnetic Fields
14. The Man Don't Give A F**k by Super Furry Animals
15. All Flowers In Time Bend Towards The Sun by Jeff Buckley and Liz Fraser
16. Are You Lookin' by The Tymes
17. A Real Hero by College & Electric Youth
18. Feelings Gone by Callum Easter
19. Sunday Morning by The Velvet Underground
20. Did I Say by Teenage Fanclub
21. Don't Look Back by Teenage Fanclub
22. Your Love Is The Place Where I Come From by Teenage Fanclub
23. Belfast by Orbital
24. Clouds by The Jayhawks