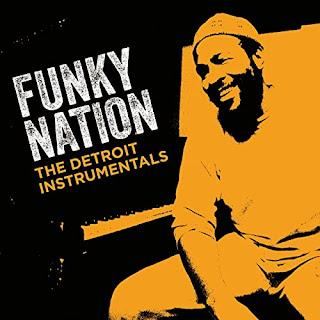 Recorded during the summer of 1971, Funky Nation: The Detroit Instrumentals is the result of some downtime that Marvin Gaye had after refusing to tour in support of his classic What's Going On album.
Released to coincide with the 50th version of What's Going On, it would appear that these studio jams, led by Gaye, were largely forgotten about. A few have cropped up on expanded editions through the years, but this is the first time they have been released as one.
Gaye is joined by Hamiton Bohannon on drums, the trio of Ray Parker Jr. (only 17 at the time), Wah Wah Watson and Leroy Emmanuel on Guitars, as well as Michael Henderson on bass. Gaye played keyboards and percussion.
There isn't a great deal of information other than that the sessions were led by Gaye. You barely hear him, other than the first track Checking Out (Double Clutch) when he introduces the band and then on the beautifully loose Struttin' The Blues where Gaye is just grooving along making sounds with the jam.
Was he just enjoying cutting loose and hanging with musicians?
At times things are pretty rocking, Daybreak starts with a riff that wouldn't be out of place on a 1966 Kinks single. At other times, there is some funky soul instrumentals like Help The People, while the title track is stoned soul that appears to be going nowhere until 1 minute 15 when everything just comes together with ease. Chained is an instant favourite, listen to the bass groove, the drums and that little guitar riff.
This is an album well worth checking out, it's just super loose and cool, the band are, well they are just as  Marvin says these cats sure are funky.
If you're a fan of Gaye's then it is worth checking through his online catalogue as there is an incredible amount of bonus material backing up his albums.
A couple to highlight from the 50th anniversary of What's Going On are the demo of Symphony with Gaye repeatedly singing what's going on and the stunning instrumental I Love The Ground You Walk On.
Posted by everythingflows at 14:16