Sunshine After The Rain

Trust Me #32 Sunshine After The Rain by Ellie Greenwich

It's f**king pissing down. Pouring. Torrential.

Can things get any worse?

War, the threat of nuclear weapons being used, millions of people fleeing their homes and their country, climate change, the Brazilian rainforest still being chopped down rather than protected and supported, the cost of living crisis, the lack of empathy and support from the worst government in history. A government intent on lining the pockets of their cronies, who accept dirty Russian money in donations, a government who would rather tax the poor than the rich and the companies raking in billions in profits.

I wanna see the sunshine after the rain

I wanna see bluebirds flying over the mountains again

Sunshine after the rain

Oh where is the silver lining, shining at the rainbow's end

Can things get any worse? Well they are going to!

We seem to be standing back and taking this. Where is the fight? If this was the 80's there would be rioting in the streets? Has the fight been beaten out of us? Do we just now tweet our anger and see how many likes it gets?

I obviously don't condone rioting. But there should be MASS PROTESTS taking place to display our dissatisfaction at the government. Cause we're all pi$$ed off? Right?

And the opposition?! What opposition! They should be going to town on this government, on this so called leader. It's a joke, it is embarrassing that so much sh*te is going on and we seem to be taking it.

So yeah, it's pouring down and I wanna see the sunshine after the rain. I want to see light at the end of the tunnel. Spring might have sprung, but it sure feels pretty dark right now.

Anyway, out of my frustrations I revisited Denise Johnson's cover version of Sunshine After The Rain, released shortly after her sad passing in July 2020, a few months into the pandemic. 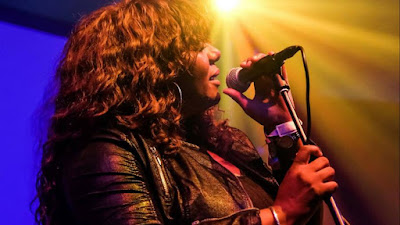 Denise's effortless voice sounds beautiful, soulful, hurt and reflective n her version. I thought I would feature it as my cover version of the month.

But actually Sunshine After The Rain was written and released by Ellie Greenwich in 1968 - and it is INCREDIBLE! Utterly joyful.

Greenwich wrote, or co-wrote, a huge number of hits including Be My Baby, Christmas (Baby Please Come Home), I Can Hear Music and River Deep Mountain High. WOW!
In the 60's, you could do a lot with a song in under 3-minutes. It's incredible that Sunshine After The Rain is only 2 minutes and 28 seconds long. Greenwich packs in so much; a 15-second intro leads to verse 1, flowing into verse 2 that ends with the question will there be a day when the sun will shine?
And then we're into the chorus at 42 seconds. Euphoric, hopeful and uplifting. Oh how good to hear music like this, how joyful to hear someone going for it with their voice.
After another 2 verses and a chorus, verse 1 is revisited, but it's slowed down, like a short breakdown, but then we're back tumbling head over heels in the chorus. Glorious! The musicianship is impeccable, the arrangement is sublime and it just seems to be sprinkled with that magic 60's fairy dust.

Ellie Greenwich - Sunshine After The Rain

And then a singer called Elkie Brooks released a cover version in 1977 - also rather beautiful. And then in 1994 New Atlantic featuring Berri released their version, with a little sample of Donna Summer for good measure. Berri rereleased the song the following year and it became a top 10 hit.

Sunshine After The Rain is an incredible song, no matter how it's played and sung. Whether it's Ellie Greenwich in 1968, cheesey electro pop in 1994 or Denise Johnson stripping it back to the bar bones in 2020.

Elkie Brooks - Sunshine After The Rain

Berri - Sunshine After The Rain

Denise Johnson - Sunshine After The Rain

I've added Ellie Greenwich's version to my Trust Me playlist on Spotify. Search for Everything Flows Trust Me or CLICK HERE

I've also added all 4 versions mentioned in this blog to my Everything Flows Cool Cover Versions playlist. CLICK HERE

1. Something On Your Mind by Karen Dalton
1A. Crimson and Clover by Tommy James and the Shondells
2. I Am, I Said  by Neil Diamond
3. Where's The Playground Susie?   by Glen Campbell
4. If You Could Read My Mind by Gordon Lighfoot
5. Gimme Some Truth by John Lennon
6. Gone With The Wind Is My Love by Rita and the Tiaras
7. In The Year 2525 by Zager and Evans
8. The Music Box by Ruth Copeland
9. The Ship Song by Nick Cave
10. Sometimes by James
11. I Walk The Earth by King Biscuit Time
12. Didn't Know What I Was In For by Better Oblivion Community Centre
13. When My Boy Walks Down The Street by The Magnetic Fields
14. The Man Don't Give A F**k by Super Furry Animals
15. All Flowers In Time Bend Towards The Sun by Jeff Buckley and Liz Fraser
16. Are You Lookin' by The Tymes
17. A Real Hero by College & Electric Youth
18. Feelings Gone by Callum Easter
19. Sunday Morning by The Velvet Underground
20. Did I Say by Teenage Fanclub
21. Don't Look Back by Teenage Fanclub
22. Your Love Is The Place Where I Come From by Teenage Fanclub
23. Belfast by Orbital
24. Clouds by The Jayhawks
25. Dreaming Of You by The Coral
26. Everlasting Love by Love Affair
27. Walk Away Renee by The Left Banke
28. Teenage Kicks by The Undertones
29. Shaky Ground by Sneeze
29. Rill Rill by Sleigh Bells
30. I Can Feel Your Love by Felice Taylor
31. The State We're In by The Chemical Brothers w/ Beth Orton