When FRETS announced that there would be a follow up to the Grant, Blake & Butler Celtic Connections shows in their hometown of Strathaven I immediately snapped up a couple of tickets. Their Saint Lukes show at the end of January left me with a warm afterglow for a couple of weeks.

Three brilliant songwriters clearly enjoying getting together, learning (and appreciating) each others songs and having fun playing them. 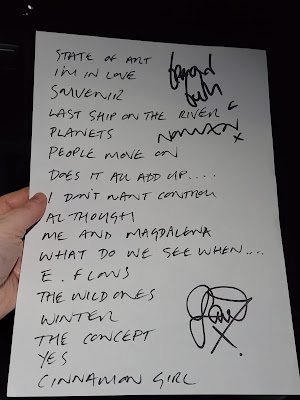 My friend Christina bagged the one and only handwritten setlist
James Grant kindly arranged to get it signed for her
The setlist was largely the same as January, a cover of The Monkees Me and Magdalena, written by Norman's friend Ben Gibbard, was a welcome addition. A really beautiful song from the last Monkees album.

Bernard talked of only discovering the song at 10pm the night before after Norman suggested playing it. He played it a few times in a row and sent it to his wife and friends, highlighting that if this show wasn't taking place then he wouldn't have discovered it.

In a similar way I wouldn't have discovered the songs by James Grant. His humour, songs and voice across the two shows I attended was incredible. Really strong and soulful.

Check State of Art from James first band Friends Again. CLICK HERE
I need to check if Grant has recorded it in a similar way to the stripped back soulful version he played last night. Grant's voice was effortlessly rich and deep all night long. Winter was probably my favourite song that he performed.
If you're the only star, in countless constellations
Won't you shine on the debris of my situation
Winter
Shine on, shine on
In the beauty of a storm, I wither
I wither
And as for humour - his chat surrounding alpacas and misty maidens was hilarious.
Norman, joined in the fun, telling a tale about the height of each member of The Beatles and the height of his band mates in Teenage Fanclub. They were officially bigger than The Beatles!
The tale of writing I Don't Want Control Of You following the birth of his daughter is one that led to me finding deeper meaning in the song. Particularly when I became a Dad. It's such a beautiful song. And Norman's voice is ageing like a fine wine.
Every day I look in a different face
The feelings getting stronger with every embrace
I don't want a world of pain
Staring at every tear
Don't want this world to stay the same
Grow with every year
Everything Flows with Bernard going for it on his beautiful semi acoustic was a delight. Afterwards Butler said he could almost see Raymond looking over him as he played. Norman expressed his admiration at his friends playing. Bernard then let it slip that Norman had played him a new Teenage Fanclub song in the car last night after Blake had picked him up - promising news!
Ah yes, Bernard Butler. It's been a genuine pleasure to witness him playing guitar up close in such an intimate setting on a couple of occasions. He feels everything, rarely looking at the neck of his guitar. And the way he improvised on some of Grant and Blake's songs was joyful to watch.
Butler's opening choice of Souvenir was backed by a sublime performance, his reading of The Wild Ones by Suede was gorgeous - slowed down and soulful. His voice is ageing well. I can understand why he has recently released his debut album with newly recorded vocals.
And of course Yes got a suitably rapturous response on stage and off. Blake introduced it as a f**king incredible song. And it is. Again, I loved Bernard's stripped back reading of the song. Slow, sublime, soulful and spine tingling. I'd love to hear the trio record an EP or mini-album, each choosing a couple of their songs.
Ending with a really urgent take on Neil Young's Cinnamon Girl, Grant, Blake & Butler left to a deserved standing ovation. An excellent night. James has recorded a solo version of 'State of Art'. Released as a download only single probably 10 years or so ago.