Echo and the Bunnymen 40th anniversary at the Barrowland 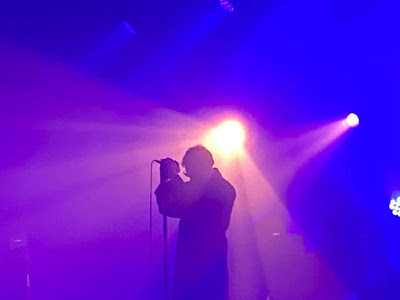 A half silhouette, half human, bathed in a spotlight, mumbles in a broad scouse accent; 'This is the best song ever written' and his band take off, playing The Killing Moon, released back in early 1984.

At one point band and singer fell away to let the Barrowland crowd sing;

Up against your will

Through the thick and thin

He will wait until

You give yourself to him

2,000 people give themselves 100% completely to him - the half silhouette, half human. His name is Ian (Mac) McCulloch who formed Echo and the Bunnymen way back in 1979, quickly going on to release their debut album Crocodiles in 1980.

Echo and the Bunnymen are a special band. Their first four albums in particular created the kind of devotion that is only saved for the very best of bands. People followed them like a football team and many gigs were like cup finals. Their 1997 comeback with Nothing Lasts Forever could have a case for being the greatest musical comeback of all time, coming over a decade since they had done anything of note. And after Mac had left the band.

Last night wasn't the most euphoric Bunnymen gig I've seen, it wasn't the best, but the best teams with the strongest leaders can still pull a performance out when they need it.

Early on Mac said he was nervous, playing the Barrowland on the last night of their tour. This was after he joked 'it only feels like yesterday that we were here.' This was their second sold out show in a row and I'm sure many in the audience will have attended both nights.

Will Sergeant on guitar coxed exquisite sounds and freaky psychedelic sounds, introduced on stage by Alan McGee as the best post punk guitarist. His playing on Ocean Rain was simply sublime, truly beautiful. Sergeant could attack his guitar with grace one moment, then play stunning solo's on just a couple of strings next - incredible.

And Mac, the half silhouette/human? Well his presence was felt by every single person in the room. All eyes were on him. He berated the sound engineer a little at the start, took drinks from the drum riser during and in between songs, talked nonsense and ... most importantly ... he sang his heart out. His brittle heart. When he pulls way from his microphone, head tilted back, then you know he is at his best. 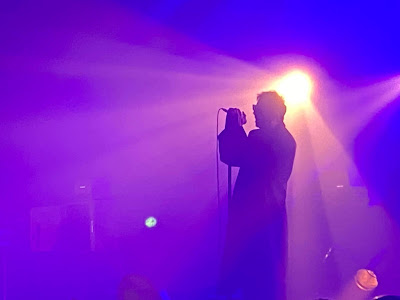 Sure at times he was croaky and hoarse. But at other times he thrilled as he reached as high as he could go and at others pulled us closer with a mere whisper. Throwing in Walk On The Wild Side during Nothing Lasts Forever and then bringing it back is an old and seasoned Bunnymen trick, as is a little segue into Roadhouse Blues here and The Jean Genie there.

Over the wall, hand in hand felt important and urgent, especially so given the current news and seeing such bravery from Ukranian citizens. It electrified the Ballroom, the band played superbly. See you at the barricades.

Highlights? Rescue lifted the crowd early on and it was followed (perhaps a little too early in the set) by Bring On The Dancing Horses, but it dazzled and it always will. An extended Lips Like Sugar that went pretty psychedelic was a delight. But it was the encore that raised the roof.

The Cutter was skyscrapingly euphoric, the crowd singing say we can, say we will, not just another drop in the ocean before those incredible strings and Sergeant's guitar reach heavenly. And then the aforementioned greatest song of all time with the best choir in the world that Mac said he wished he could take on their American tour.

And then? Then it was Ocean Rain. An even better song than The Killing Moon for me. So pure, heartfelt, soulful and true. Beautifully played and sung.

All hands on deck at dawn

Your port in my heavy storm

They'll be back. And we'll be there.