Cover version of the month #60
The Associates cover Blondie 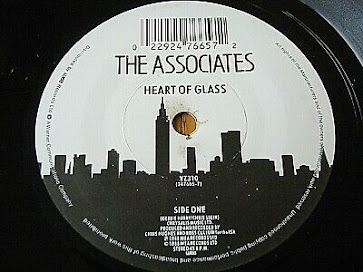 There is a Scottish indie club night called Simply Thrilled that has quite an active Facebook Group page. I love the chat and passion for music that is regularly displayed on the page and recently started a conversation about cover versions and someone commented on The Associates cover version of Blondie's Heart of Glass.

The Associates are a Scottish band that I have yet to fully explore. Plenty of other people have explored and fallen for them, largely thanks to singer Billy MacKenzie who had a voice and style that many admired.

However I instantly fell for their cover version of Heart of Glass. But lets start with the original.

Written by Debbie Harry and Chris Stein, Heart of Glass appears on their seminal Parallel Lines album in 1978, eventually released as the third single from the album, reaching number 1 in the UK and USA.

The song was actually written as far back as 1975 with the working title Once I Had A Love/The Disco Song. They had tried it in various guises before Parallel Lines producer Mike Chapman asked them to play everything they had, they then teased the pop out of it.

Parallel Lines was the bands breakthrough album, spawning classic singles Hanging On The Telephone (a cover of The Nerves song), Heart Of Glass, One Way Or Another and Sunday Girl.
Heart of Glass has disco at its heart and the punk pop band experimented with new drum machines and synths to get their sound. It grooves, it shimmers and it inspires. The extended outro on the album version just brings a smile to my face and makes me want to dance.
Debbie Harry smoulders in the video, her falsetto is glorious, she looks incredible and just seems in complete control. The band look like they are having fun, making exceptional music with a super cool singer. Blondie were on absolute fire.
The Associates, who formed in 1979, released their version 10-years after Parallel Lines. I absolutely adore it. The music is pretty true to the original, but MacKenzie's voice just changes the song completely.
On the Blondie version it is Harry's falsetto that introduces the song, with The Associates it feels more like MacKenzie is talking to the listener personally. The vocal is more controlled and assured, but come 1 minute 23 seconds in and for the second verse, MacKenzie moves things up a little notch.
The synths bubble throughout and if Blondie looked and sounded like they were having fun with the original then that is echoed throughout The Associates version.
The post solo yeeeeaaaaahhh, ooooohhh, lost inside, adorable illusion and I cannot hide, we coulda made it cruising section is absolutely euphoric.
When the Simply Thrilled boys throw their first post COVID club night then I sincerely hope that this is blasted out of the speakers in The Admiral bar in Central Glasgow.
Search for Everything Flows cool cover versions on Spotify for a playlist of the covers I have blogged about and read on for a full list and links to previous cover of the month blogs.
Previous covers of the month
1. You've Lost That Lovin' Feelin'
2. Going Back To My Roots
3. Nirvana play The Vaselines
4. Slip Inside This House
5. Top 10 covers by Teenage Fanclub
6. Only Love Can Break Your Heart
7. Time For Livin'
8. Sound and Vision
9. All Along The Watchtower
10. I Am The Walrus
11. Guiding Star
12. You’ll Never Walk Alone
13. Hurt
14. This Guy's In Love With You
15. I Wish I Never Saw The Sunshine
16. California Soul
18. Wonder wall
19. Dancing In The Dark
20. Always On My Mind
21. Ceremony
22. Heroes
23. Different Drum
24. Wild Horses
25. Respect
26. Mr Tambourine Man
27. I Heard It Through The Grapevine
28. Superstar
29. Twist and Shout
30. Purple Rain
31. Baker Street
32. Not Fade Away
33. Stop Your Sobbing
34. I Don't Want To Grow Up
35. Serious Drugs
36. Dancing With Myself
37. How Does It Feel To Feel?
38. Love Buzz
39. ABBA-esque
40. Jumpin' Jack Flash
41. Discoland
42. Varshons 2 by The Lemonheads
43. The Langley Schools Music Project
44. Witchi Tai To
45. Our Lips Are Sealed
46. Sunshine Of Your Love
47. Here Comes The Sun
48. I Think We're Alone Now
49. Don't Let Me Down
50. It's Oh So Quiet
51. Alcoholiday
52. Summer Holiday
53. Who Do You Think You Are?
54. Head On
55. Nothing Compares 2 U
56. Hey Jude
57. Seven Days Too Long
58. L.O.V.E Love
59. Into Your Arms