Shakermaker and Oasis at the Cathouse 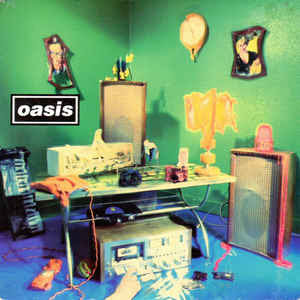 Noel Gallagher had a clear vision for Oasis and once he had secured a deal with Creation Records he had a very simple plan to back that up - his band would release a single every few months, like his heroes The Jam had when he was younger. And the singles would have great b-sides.

Gallagher was as good, if not better than his word. Oasis would release 10 singles between the April 1994 release of Supersonic and the February 1996 release of Don't Look Back In Anger, a staggering run that took them from pubs to the verge of Maine Road, Loch Lomond and Knebworth.

Shaker Maker was the second single, arriving on 13th June, only 3-months after Supersonic. The band didn't just release regularly, they toured relentlessly, across the UK, Europe, America and beyond.

After catching them at the Tramway for Radio 1 Sound City and the Supersonic tour, I bagged a ticket to see them at the (original) Cathouse in Glasgow for this promo tour.

I arrived early and the sound of the band soundchecking blared out the venue and into the Glasgow sunshine. Along with others we sang along with many tunes known through Radio 1 live performances and tapes given away with the likes of the NME and Select Magazine. We sang the guitar riff to Supersonic - we were super keen!

The Real People supported and I remember the best of Sly and the Family Stone playing before Oasis came on. The place was bouncing although there was plenty of space, they did play two nights and I was there on the Sunday. 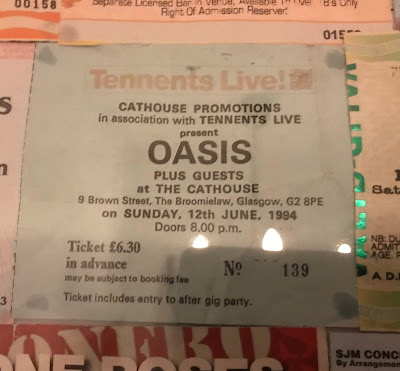 Oasis were exceptional. They opened with Shaker Maker and the guitars sounded massive as the band eased into the groove and Liam sang I'd like to buy the world a coke from the New Seekers song that Noel had pinched the melody from.  Noel teased the riff to Cigarettes and Alcohol a couple of times but then played something else, he would regularly ask the crowd 'reckon we're any good?' fully knowing the answer.

I pogo'd like mad down the front and was swept off my feet at times. I remember the chorus for Up In The Sky and the breakdown section sounding incredible. Noel and Liam walked off towards the end of I Am The Walrus leaving the rest of the band to play on. I remember buzzing off the show for the rest of the week, telling everyone I could about this incredible band. 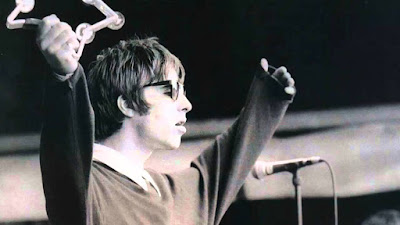 Shakermaker came out the following day and I knew it off by heart already. I'd got someone to tape the Radio 1 broadcast show I had attended in April and I'm pretty sure I would have taped the video off the Chart Show on a Saturday morning. It had an energy, although it wasn't what I thought the next single would be, I was holding out for Fade Away that I had heard in demo form from a Select Magazine tape.

Shakermaker was a bit of a holding single, keeping the momentum going for the proper breakthrough that would come when Oasis released Live Forever. It worked a treat. The press were falling for the Gallagher brothers and an interview with John Harris for the NME, later to be released as the 7-inch single Wibbling Rivalry, sent them into overdrive. They looked great, swore, took drugs, played great shows, wrote great songs and wanted to be stars.

Shakermaker has it's strengths, but the b-sides were more interesting for me.

Noel's D'Yer Wanna Be A Spaceman is a beauty, balancing dreams with reality and potential regret, talking of having bills to pay and forgetting the simplicity of climbing trees and dreaming. 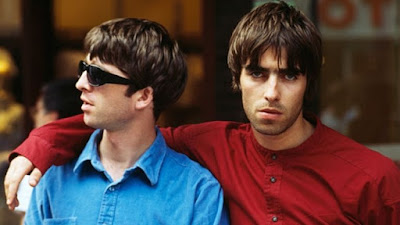 Alive is another Noel song where his doubts about being left behind come out, but he also seems to be egging himself on. It's a song I would have loved Oasis to have recorded properly, but the 8-track demo version captures a moment in time with Noel's frustrations and fears coming out in the lyrics, Liam's voice developing and the guitar sound beginning to come through.

The live version of Bring It On Down begins with Liam shouting Good evening Great Britain and is believed to come from a 1993 radio session, although I've never read of this being confirmed anywhere. The power of this song is evident and the band tear through it. Alan McGee wanted this to be Oasis' debut single and you can hear why, with the guitars, lyrics and delivery it's the Sex Pistols updated for 1994.


You're the outcast, you're the underclass
But you don't care, because you're living fast

Scroll down for the Shakermaker video, the bands Top of the Pops debut playing the song, rare footage of the band performing on Naked City and Noel being interviewed, Glastonbury footage and also rare footage from earlier in 1994 when they played a Sony event at Gleneagles hotel.