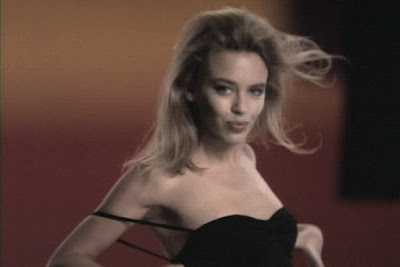 I'm really looking forward to Kylie at Glastonbury this Sunday with her hit packed set due to be broadcast live on BBC1. Oh to be there as Kylie takes a sun soaked crowd on a glorious pop journey through her greatest hits. Her new Step Back In Time collection is out today.

Kylie is a pop princess who I grew up with, from Neighbours, through the Stock, Aitken and Waterman years, indie Kylie, duets with Nick Cave, the second coming in the 00's, several heartbreaks, cancer and becoming a national treasure.

Kylie at T in the Park in 1995 was a dream. I was determined to get to the front of the stage and ducked and dived through the crowd, looking round to find I was leading a conga with one guy saying 'we're following you wee man, keep going'. I still regret not buying a Kylie Kat t-shirt in the style of the Kit Kat logo.

The second time I caught Kylie I was in the second row of the SECC Armadillo. What a night that was! My friend Phil and I spent the afternoon in McChuills and jumped a cab. We sang and danced our hearts out. This was post Spinning Around and Kylie was on the way back up after some years in the wilderness. Gold hot pants that Kylie bought in a charity shop became a national talking point! The third and final time I caught Kylie was in the SECC and again I was right down the front losing it to her pure pop perfection. What a show she put on!

Of course I fancied Kylie, I still do.I love her songs, I love her attitude, her performances and her personality. I think she will be incredible at Glastonbury.

1. Better The Devil You Know

Pure euphoric pop. Hi NRG with Kylie smouldering in a thin black dress. I love Kylie's hair in this one - stunning. I used to play this song when I DJ'd and by the end I would turn the chorus down to hear the crowd singing. Even if it was the first time people had heard it they would be singing along. The power of pop. Pure pop perfection.


2. Spinning Around
This was a kind of comeback single. Kylie hadn't featured in the UK top 10 since 1994's Confide In Me before the release of this incredible pop gem in the summer of 2000. It was everywhere; Kylie was back, Kylie was everywhere and the world seemed like a brighter and happier place.

Dance, it's all I wanna do, so won't you dance?

What a line to open a song and then you have the chorus;


All the lovers that have gone before, they don't compare to you

How would you feel if Kylie sang that to you?!

It's 2010 and this is a different Kylie; more mature, assured, giving advice rather than doubting herself. The song takes off with a glorious synth solo, the video has Kylie crowdsurfing on top of underwear clad models in downtown LA, sounding breathless, sexy, in control.


4. I Believe In You
A co-write with Jake Shears from the Scissor Sisters (apparently there is a long lost album of co-writes) this is stunning pop that flows superbly, lifting for the chorus. The synths bubble into action and as the beat kicks in. Pop perfection.


I don't believe I'd love somebody just to pass the time


5. Love At First Sight
Released in 2002, Kylie was riding high on a run of sensational pop singles that started with Spinning Around and took in Kids with Robbie Williams, Can't Get You Out Of My Head and In Your Eyes.

Kylie bopps about in the video, looking sensational. The song grabs you instantly and takes off into Donna Summer at times. It's Kylie pop brilliance.

2000 TO 2002 was peak Kylie for me, a pop princess was crowned during this iconic performance at the Brits when the song was mashed with New Order's Blue Monday. CLASS!


7. Some Kind Of Bliss
A co-write with the Manic St Preachers, this single only reached number 27, incredibly low for Kylie, but I love it. It's indie Kylie, it's refreshing that guitars are to the fore and synths are banished, with key strings underpinning the chorus. And Kylie sound very fresh, natural and it is clear that she is enjoying singing it. Another fave Kylie hairstyle of mine.


8. What Do I Have To Do?
Catchy, cheeky, hi energy pop, this comes during the first of Kylie's two current career peaks (in my opinion). Released in 1991, it was the 3rd single in a glorious run of Better The Devil You Know, Step Back In Time, What Do I Have To Do? and Shocked. The Stock, Aitken and Waterman glory years!

Kylie looks fantastic, smouldering on a throne like chair in a blonde wig, tearing up the dancefloor in as a brunette pixie and looking fresh in a pool. The chorus takes a minute to kick in but when it does it is absolutely HUGE and it is repeated for good measure.

Kylie had left the Stock, Aitken and Waterman stable that had brought her so much success and signed with indie label DeConstruction. Kylie was now working with the likes of M-People and Brothers in Rythm to widen her artistic credentials.

The video is pretty incredible! Inspired by Barbarella, Minogue floats around in a spaceship shedding her clothes. As an 18-year old this blew my mind!

10. I Should Be So Lucky
It is pure unadulterated pop, simple, catchy and you find yourself singing on first listen ... on every listen. Minogue dancing through her living room and into the bath captivated the world, but the video needed the song with it. What a song; imagination, dreams coming true, lucky in love ....