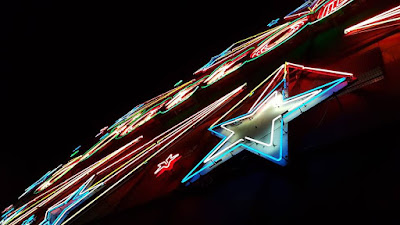 
There is no doubt, in what I must do
Nothing is greater, than to be with you

Phew, I'm just in from the Barrowland Ballroom following a peerless performance by Teenage Fanclub who flew though their Grand Prix and Songs from Northern Britain albums.

Paul Quinn replaced Brendan O'Hare on drums (as per the recordings) and it was a classic 4-piece line-up that took to the stage and burst through Raymond's About You to a huge cheer.

O'Hare was never far from the action, walking on to the stage draped in a red cloak at the start of Gerry's much loved Sparky's Dream, appearing with a little percussion instrument to kick off the song. At other times he checked up on the band with a clipboard, or stood beside Dave to play percussion. His humour and energy is infectious and at one point he joked that everyone should look at him cause that's what its all about :-)

Grand Prix has such a superb run of songs, we had Norman's beautiful Mellow Doubt, followed by the stunning Gerry Love penned Don't Look Back. We were being spoilt. 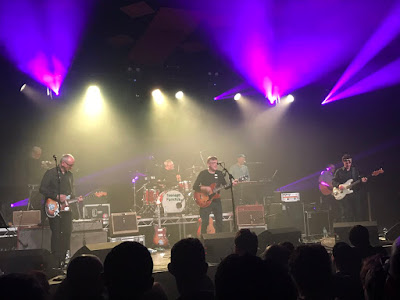 Neil Jung was simply stunning. There was soul, power and real feeling to Norman's guitar and voice. He then excelled in delivering a gorgeous version of Tears which tugged on the heart strings.

The way Norman and Gerry's songwriting developed on Grand Prix was exceptional. Love's energetic Discolite was sublime and Going Places caused hearts to melt, it was exquisite.

It wasn't only Brendan that supplied the humour as Norman regularly had to battle to tune his guitar (just like the old days) or check which fret he should place his capo on.

McGinley's songwriting was also developing, Verisimilitude received a fantastic response from the crowd, while with Say No was one of his own highlights from the night.

Hardcore Ballad was superb. The band riffing and ripping it up to leave Norman alone with his acoustic to sing from the bottom of his heart. It was a stunning end to the set, really beautiful and heartfelt.

Last summer I blogged about Songs from Northern Britain HERE and stated that I had come to the conclusion that it was the best Teenage Fanclub album. I stand by that. My favourite album will probably always be Bandwagonesque cause I discovered that LP and the band when I was 15, a really special time. But song for song and the way all 3 songwriters have developed, SFNB is peerless.

The performance at the Barrowland was exceptional. The way Blake and Love combined their vocals was utterly joyful, the way Raymond shredded his guitar on Can't Feel My Soul was exhilarating, the sky scraping choruses of Ain't That Enough, I Don't Want Control Of You, Take The Long Way Round and Speed of Light made me feel like a teenager, completely lost in the music and the wonder of the sound that 4 friends can create with guitars, bass, drums and a little imagination, and the escapism sought in Planets, Winter and Mount Everest sounded ever more appealing. And then you have the gorgeous Your Love Is The Place I Come From with the usual cheers for Norman on xylophone.

I described the first night at the Barrowland as majestic, well tonight was peerless. Special mention to Dave McGowan and Francis MacDonald (Brendan gets his above) - two incredibly talented musicians who were phenomenal in helping the band sound superb. 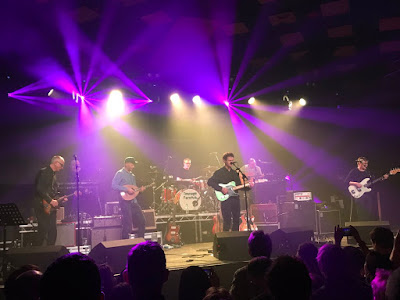