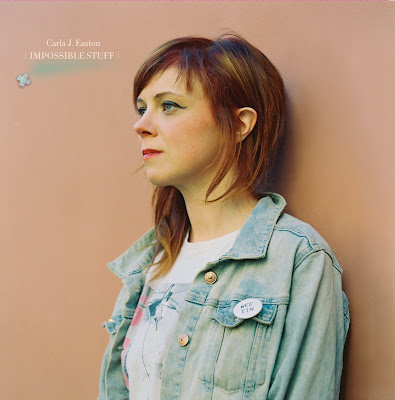 If you are a regular or semi-regular reader of my blog then you'll already know of my sisters creative talents through the songs she has written and recorded with her bands Futuristic Retro Champions and TeenCanteen and her first solo album Homemade Lemonade that she released under the guise of Ette.

Carla is now stepping out as an official solo artist after a particularly productive couple of years that included the aforementioned Homemade Lemonade album, the Say It All With A Kiss LP and the Sirens EP with TeenCanteen, as well as videos, festivals and sessions

There have been collaborations with Belle and Sebastian - a co-write and lead vocal on Best Friend and with Kirsty Law on The Iron Railing, a writing retreat at the Banff Arts Centre in Canada and then a return trip to record the album with Howard Bilerman, who produced Arcade Fire's seminal Funeral LP, on production duties. Oh and she is making a documentary on Scottish girl groups, curated a night at the Edinburgh Arts Festival and I'm pretty sure I've missed something. Oh yeah, she has 6-songs recorded that might be on her next album plus a couple left over from Canada.

In short it has been fantastic to see my wee sister so creative and productive and receiving excellent support from all over the world. Her 2 visits to Canada in 2017 were, in her own words, 'life changing'. On a writing retreat at the Banff Arts Centre, she bloomed and was promptly invited back to record an album.


And so on to the album Impossible Stuff  . I originally started writing a blog on it last October when I first heard it, then deleted it, rewrote some, scrapped it, started it, left it ...... and finally decided just to go with what I have! So here is a short review, some of the videos released over the last year and links to other reviews and interviews. There has been a fantastic response to the album. I'm super proud of my wee sis. And there is a lot more to come from her!

Check the video for Dreamers On The Run (above), the opening track, with Carla representing Scotland at the Eurovision) opens the album. It's under 2-minutes long but there is a lot packed in. The song floats and flows, Fats Kaplin on violin is stunning and there is a strong Celtic melody and tone.

The title track is exceptionally melodic and playful with Carla utilising the talents of friends she made in Canada at the Banff Arts Centre. There are strings, crashing drums, a beautiful piano solo and then a build up to a glorious racket that starts at 2 minutes 12 seconds and brings in a choir and what sounds like every instrument Carla's friends could get their hands on. It sounds amazing! Check the video recorded with talented friends within 3-days of returning from Canada.


Lights In The Dark was the first single to be released from the album back at the start of the year. Carla tells a story and her lyrics paint a picture, the 80's drum beat sounds cool and it's one of my favourite vocals from the album.


Meet Me In Paris has a nice psychedelic tinge to it courtesy of some sitar action, the melody, feel and urgency in the song makes an immediate impact. Melodies pour out of my wee sister, almost literally on Never Had the Words, the vocal melody just tumbles out and doesn't stop, its a real favourite.

Next is second single Wanting What I Can't Have. I remember Carla sending me the demo that she recorded at our Mum's house and her being really proud of it, describing it as a little Primal Scream-esque. It's an epic, particularly good live.


The album spins from Carole King inspired numbers, to 80's drum machines and synths, to Spector-esque walls of sound, to stomping pop and Milk and Honey (video below) merges the last two.


Things slow down for Girl from Before, a late 50's/early 60's inspired ballad with soaring strings and at one point it seems like the vocal melodies are just going to keep building, before slowing back down. There is some stunning guitar playing towards the end.

Then Vagabond, the oldest song on the album and originally a b-side to the TeenCanteen 7-inch You're Still Mine, is rerecorded and it is just gorgeous. Here is a live version Carla recored with TeenCanteen.


The album ends with the Harrison produced by Spector Lullaby. All Things Must Pass is a favourite album of Carla's and I know she listened to it a lot en route to Canada. This is a spine tingler, the guitar solo is stunning.

Impossible Stuff delivers more on every listen, the quality shines through. Melodies are everywhere, the playing and production is exquisite, there is real heart on sleeve soul, playfulness and the sound of someone in the zone with a studio, producer, engineer and musicians who believe in her and can create the sounds from here head.

Impossible Stuff has been getting a lot of attention and people are saying some lovely things! In addition to airplay and sessions, here are some links to review and interviews, including a cracking track-by-track interview Carla did with The Skinny. You can buy the vinyl from Olive Grove Records and it should be in Monorail, Assai and Love Music.

The Skinny track by track

Record of the Day - Milk and Honey 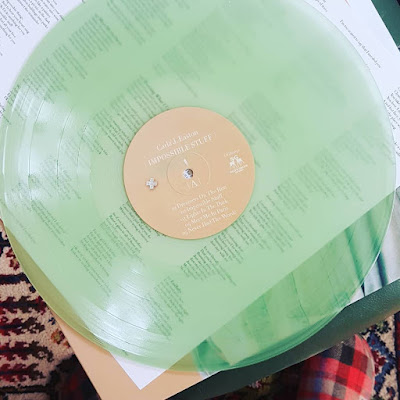