Teenage Fanclub were magnificent tonight, they were majestic, funny, soulful and true to themselves. They laughed at each other, themselves and together. They had fun and it visibly showed.

The first night of the Creation Records years run of shows at the world famous Barrowland Ballroom was a triumph. The famous Barrowland roar that rose from the floor as the band walked on stage was repeated before they could even begin. The partisan crowd were here to greet band and classic albums Bandwagonesque and Thirteen like long lost friends ... and they did.

Norman Blake's words from 1991 were bellowed back at him by the crowd, guitars chimed and Joe McAlinden joined in on violin. The sound was perfect, especially standing in front of Raymond McGinley as he bended notes and shredded his guitar. The band extended The Concept before using feedback to usher in the ferocious riff of Satan. We were off.

December was utterly beautiful as Brendan O'Hare on drums pointed out. The humour Brendan displayed between (and during) songs was often hilarious. 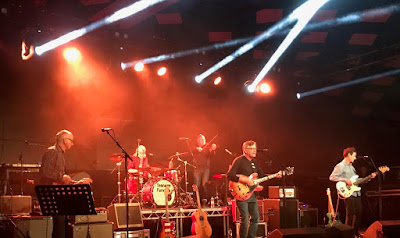 What You Do To Me was guitar pop perfection, the guitars on I Don't Know were glorious and Star Sign was utter joy. O'Hare was magnificent on drums, the rolls during the spaces were sublime, he was on fire. And very nearly passed out, dousing his head with water several times!

It will be really interesting to see the band progress through their catalogue over the 3-nights. The purity of songs like What You Do To Me, the humour in The Concept and Metal Baby are songs that could only have been written by men in their early 20's.

Likewise the simplicity of songs like Pet Rock and Sidewinder make them perfect pop - Love and O'Hare sing of smiles sending them wild, or loving the way their girl walks or talks, when she is ticking he is her tock. It is sublime and a treat to hear and see these songs performed live.

The band changed instruments and personnel throughout the night; Francis MacDonald, Dave McGowan, Joe McAlinden and briefly Paul Quinn were all on stage at one point or another, creating brilliant sounds.

The closing trio of songs were stunning. Alcoholiday probably got the best reception of the night, a Norman Blake masterpiece. Then there was a huge ovation for Gerry just before Guiding Star and he looked emotional and received just as big an ovation afterwards.

Then we had the incredible sound of 4 of TFC on electric guitar for the closing Is This Music? It was and it was tremendous.

After a short break where every guy in the Barrowland seemed to go to the loo, the band were back to play Thirteen. Norman joked by playing the start of The Concept again but then we were into the intro of Hang On with Gerry Love coming up with one of my favourite lines


Of all the stars I've ever seen
You're the sun

Radio was a romp and caused some to pogo. O'Hare was magical on drums on this bubblegum punk pop perfection. 120 Mins was a contender for the most beautiful song of the night with McGowan playing mandolin. They hey hey hey's during Fear of Flying were great fun on stage and off and it was a treat to hear McGinley's stunning Tears Are Cool, truly one of his best, it just flows superbly.

The short Ret Live Dead led into the jam Get Funky and I wish it had gone on longer, again the band looked like they were having real fun with three electric guitars gelling and it caused me to think what bands have fun jams on their albums these days? TFC have always played by their own rules.

Gerry Love's beautiful Gene Clark closed a very memorable night and it was fantastic to see so many friends I have met through a mutual love and appreciation of the band.

Roll on night 2!
Posted by everythingflows at 16:45