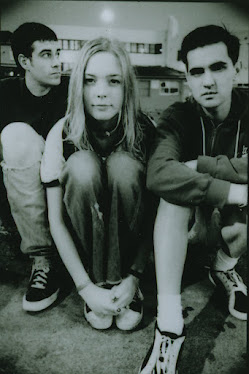 Smudge formed in Sydney, Australia, 30-years ago back in 1991. Tom Morgan wrote the songs, sang (most of the songs) and played guitar, Paul Duncan was on bass (later replaced by Adam Yee) and Alison Galloway was on drums.

The story behind their formation is kind of strange, Morgan and Galloway were asked to form a band and contribute a song (Tom wrote Tea, Toast & Turmoil),to a split EP on local label Half A Cow records, run by Nic Dalton who went on to play in The Lemonheads during their most prolific, successful and exciting period.

Storytelling, melodies, humour and clever word play over fuzzy/acoustic guitars were at the heart of Smudge and they quickly set about releasing singles and EP's via Half A Cow and also Domino Records.

Three EP's were collated on the 1993 compilation Tea, Toast & Turmoil before the band released their debut album Manilow in 1994.

One of the many things I love about Smudge is that a song only lasts as long as it needs to, or, as much as Morgan had written at the time it was recorded! Funny You Should Mention That is only 24-seconds long, Top Bunkin' Duncan is only 4 seconds! While the sublime Real McCoy, Wrong Sinatra is 1 minute 21 seconds. If Smudge want to record squalling guitars feeding back - they do.

But it's the power punk/garage pop gems and the sweet acoustic songs that Morgan seemingly tosses out for fun that I love the most. 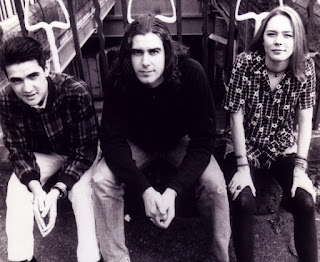 In 1991, not long after forming, Morgan met Evan Dando from The Lemonheads during an Australian tour and they became close friends. Dando returned and the two got together, writing/co-writing a number of songs that would appear on It's A Shame About Ray, Come On Feel The Lemonheads and Car, Button, Cloth.

Dando and Morgan appeared a match made in heaven. I'd love for them to get together again to see what they could come up with.

You, Me, Carpark Now (1996) and Real McCoy, Wrong Sinatra (1998) completed a trilogy of albums for Smudge. Although I'd highly recommend their 2010 compilation This Smudge Is True, collated by Nic Dalton and released on his Half A Cow label, which contains an epic 28 songs. If you are new to the band then it's a great place to start.

Smudge still play a handful of shows every year in Australia. Tom Morgan released a solo album, Orange Syringe, in 2013, while he is also still a member of Sneeze with Nic Dalton.

Here are 10 of my favourite songs by Smudge with YouTube links to them all, plus some bonus Lemonheads/Dando versions.

I've also created a playlist on Spotify - 10 from Smudge. 22-minutes and 13 seconds of brilliance! 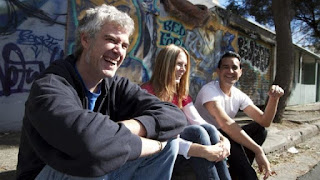 Opening with an infectious guitar riff before Morgan sings without coming up for air, flying through the song, telling a story about getting up in the morning after the night before. I particularly love the section from 42-seconds in (below) where things just flow so effortlessly - listen out for Galloway's little backing vocal - wash my hair - followed by a giggle. CLICK HERE if you don't see the video below.

And it scares me, when I find out

A love song to more than one person, certainly to Lou Barlow and Lou Reed.

I've been told that you've been bold with Harry, Mark and John

That's my second favourite line from my fifth favourite song

Morgan goes on to mention Lou being pride of place at number 1 and 2 and lay his heart on the line with the declaration;

And if you're gonna make a move

For some space in my life

It's all over in 72-seconds, guitars fizz, the drums crash and there is just the right use of organ to underpin everything else going on over the top. CLICK HERE 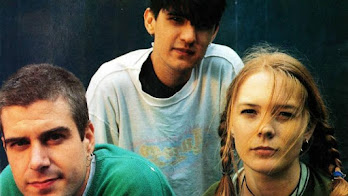 A perfect example of Morgan's songwriting genius. I imagine he literally turned  conversation he had with a friend into this gem of a song. Beginning by telling his friend exactly what a Divan is.

And if you get the feeling you'll be hanging around

There are only 3 short verses, each bookend-ed with the crash out on my divan hook. Oh to be able to write a song like this! WATCH HERE and CLICK HERE for the Lemonheads version.

In the morning i got things to do

I've gotta be up and out by ten

But if you're still asleep then I won't wake you

I love how Morgan begins each line in the verse with this is ...

It works so well, Morgan's vocal sounds as urgent as the guitar riff that introduces the song.

This is the place where I save face

This is the spot where I jump off

This is the part where I lose heart

There is then a beautiful chorus;

Over the pain and I'm past the bleeding

It's not the tracks, it's where they're leading

The song ends with the hook it's irrelevant, I'm an elephant, she's a mouse. Genius! I could imagine this being a huge hit in the hands of Dave Grohl. CLICK HERE and here is Evan playing it live.

Don't Wanna Be Grant McLennan
An early example of Morgan's humour and clever songwriting as he talks about self-doubt he feels about writing songs, lyrics come out like cliches and he sounds like someone else. He wants to be like Robert Forster from legendary Australian band The Go-Betweens but the songs I write in the middle of the night make me sound like Grant McLennan - also of The Go-Betweens.
Morgan cleverly mentions song titles, fits in the names of all The Beatles and rhymes McLennan with John Lennon. This was actually the last song I chose for this feature, but I kept coming back to it as it's so fun, I can imagine being a teenager in Sydney and going to see Smudge blasting this out.
The way Morgan and Smudge flow into a lyrical and melodic nod to The Go-Betweens Bye Bye Pride is genius.
Cos I want you to know
That I didn't know someone could be so lonesome
Didn't know a person could give off so much emotion

Smudge in full flight; a bass groove, driving rhythm guitar, acoustic at times, gelling perfectly with electric, chiming in all the right places and a yearning Tom Morgan vocal.

Waiting with that baited breath, for the wind to change

It's just a well-worn out suggestion, to occupy the day

I wished that I knew when I threw it away

That I could deal with feeling this strange

I love the flow and the feel of this song. Watch the video. 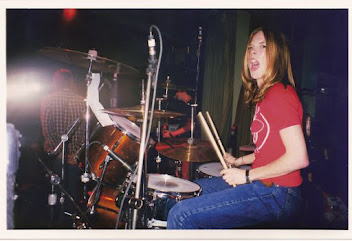 Galloway then ponders if this is a tendency to want to be able to get away quick and easy, which is a delicious hook.

Galloway's vocals are super cool, I'd love to hear her sing more. I wouldn't be surprised if she sings in a band that I haven't heard of yet.

Gotta have the time to take time

The time it should be mine

For skating down the line

I love the flow of this song, the big noisy fuzzy guitars, the hooks, the break, the instrumental and then the closing section where the song breaks down to be just Galloway singing over Morgan playing guitar.

At only 1 minute 21 seconds long, this is Morgan in full flow, telling a story and singing a song that seems to just roll off his tongue. I love this live version - below or click here and here is Evan singing it.

Less out of it

Than she was when we first met

Fellow fans of The Lemonheads will recognise this from the Come On Feel The Lemonheads album. Morgan co-wrote 8 of the 15 songs with Dando. Perhaps, Morgan was particularly fond of this one (or wrote the lions share of it) given that he also recorded it with Smudge.

After a short intro the words just flow out so naturally at a beautifully fast pace, just right. And I love the little instrumental to conclude. All over in 2 minutes 19 seconds. Listen here

It gets the same every time I shy

Away from the blame and I stand my time

But you still wonder why

I get so down about it

The finest example of Morgan's storytelling with humour approach to songwriting. This is a genius at work. A chiming electric picks notes over a battered acoustic as Morgan tells his tale of falling for a girl and lying to say that he is an outdoor type like her.

Recorded on a to a Tascam 244 4-track, Outdoor Type funny, heartfelt, melancholic, reflective, sad but also somehow uplifting. This is the art of songwriting at it's absolute best.

Dando covered it with The Lemonheads, but this original is the best version. I do love this version of Evan playing it acoustic in Smudge's native Sydney with the crowd singing along. Goosebumps!

You'll find the full lyrics below the video.  And also a list of previous Ten From ... blogs.

Always had a roof above me, always paid the rent

I never set foot inside a tent

Couldn't build a fire to save my life

I never slept out underneath the stars

Broke down for an hour in the suburbs at night

Too scared to let you know

I knew what you were looking for

I lied until I fit the bill

I can't go away with you on a rock climbing weekend

What if something's on TV and it's never shown again

It's just as well I'm not invited, I'm afraid of heights

Never learned to swim, can't grow a beard or even fight

Previous 10 from blogs (all at the time of writing)

13. Echo and the Bunnymen

15. The Jesus and Mary Chain

Interesting addition to your info, I love Smudge, my favourite band, and I'm an Aussie, Sydney, as well, so, close to Smudge's location. This track has Ben Lee on it, who is famous Sydney product in his own right, started off with Noise Addict at 15, then did solo stuff, went to the USA where he worked with Liz Phair, another favourite of mine. This was released on an EP, I think on Half A Cow as well, can't remember which one but had a song by another band on it too…
https://www.youtube.com/watch?v=Bv7CC8zgILQ