Following on from 10 from The Vaselines we move on to The Lemonheads. 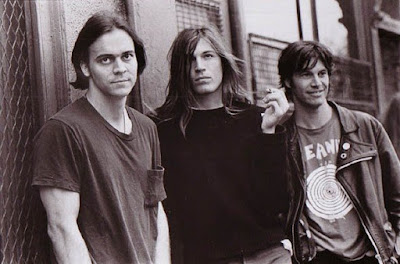 I am a HUGE Lemonheads fan and given the treasure trove of album, b-sides, bonus tracks, demos and cover versions that the band have released since forming back in 1986, it has been hard to leave out loads of songs I love to create a list of only 10. I might go back and do a blog on my 10 favourite cover versions by The Lemonheads.

I fell for the band in 1992 when they released their breakthrough It's A Shame About Ray album. Dando was super cool, super handsome and super talented. He seemed to make friends all over the world and write songs (or get them to write songs for him), play in bands, or party with them.

Evan lived the high life, in one NME/Melody Maker interview back in the day he literally couldn't talk due to partying so hard. Juliana Hatfield and Courtney Love were among his lovers, Ben Lee wrote a tribute song I Wish I Was Him, Dando won hearts and broke hearts. 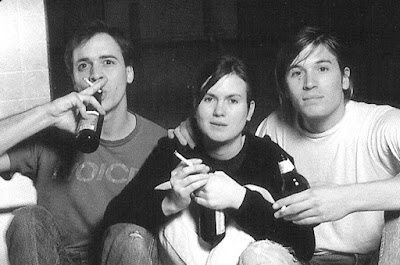 After a burst of 3 albums It's A Shame About Ray (1992) , Come On Feel The Lemonheads (1993) and Car Button Cloth (1996) and constant touring, Dando burnt out and escaped from the very public eye he was living in, disbanding The Lemonheads until 2006, occasionally venturing out to tour acoustically, releasing his stunning Baby I'm Bored solo album in 2003.

The Lemonheads released an eponymous LP in 2006 followed by two albums of cover versions. Dando has talked on stage about having side projects with Willie Mason and others. I just hope Evan keeps releasing music and keeps touring. He has a huge back catalogue to delve into to keep his audiences happy and entertained.

Live, Evan Dano solo or with The Lemonheads is an absolute joy. I smile widely throughout and have enjoyed seeing Evan or the band in venues ranging from Sleazys, to the old Renfrew Ferry when it was across the river, the QMU Debating Chamber, the Garage, Oran Mor and Saint Lukes. And The Lemonheads playing Benicassim in 2005 was a drunken joy.

So with 10 LP's, numerous EP's, b-side and more to choose from. Here are 10 of my favourites by The Lemonheads.

The Outdoor Type
Dando became friends with Tom Morgan from Smudge while touring Australia. They would go on to co-write together and Dando would also cover many of Morgan's songs; The Outdoor Type being one of them. Whilst reluctant to include cover versions in any of the top 10 features I do, I had to include one of my real favourites.

This song suits Dando perfectly as it tells a story, it has humour, it is clever, melodic and pure. Dando's voice is perfect for the confessional lyrics;


Stove
A gem from the 1990 Lovey album. The beauty of Dando and his Lemonheads is that many songs can be played acoustic or electric. Stove is one of these gems. Acoustic, it is a lullaby to an old stove that someone helped Dando move. With a full band, The Lemonheads romp through it at pace, the melody may be blurred by the speed, but the longing and love for the stove remains all too clear.


Shaky Ground
I first heard this on a Steve Lamaq Evening Session live broadcast where Dando, at the height of his pin-up days promoting It's A Shame About Ray, played an acoustic set. I think it was at Sheffield Leadmill/University. At one point he had to stop the show to ask people to stop screaming.

He introduced himself that night thus; 'Hi my names Evan Dando and I was born in the spring of the summer of love'. I think I swooned myself!

Around this time I kind of saw a girl who would walk by my house with her dog and I would make an excuse to go out and bump into her. So I particularly love the line;


Being Around
A Dando and Morgan co-write. This gem was originally the b-side of Mrs Robinson, the cover version that broke The Lemonheads, before being rerecorded and released on Come On Feel ...

The song is equally deceptively simple and brilliantly clever; asking questions with answers full of humour. Dando is all kinds of dreamy gorgeous in the promo video! #mancrush


Alison's Starting To Happen
This delightful pop punk romp contains one of my all-time favourite lyrics;

This is 2-minutes of perfection, a pop punk romp about Alison Galloway from Tom Morgan's band Smudge. Dando and Galloway were on ecstasy and he came up with the line Alison's Starting To Happen. Here are Evan and The Lemonheads playing it at Glastonbury 1994.

If I Could Talk (I'd Tell You)
A co-write with Eugene Kelly from around the time Dando effectively lost his voice due to his crack addiction. This is chiming guitar pop heaven for me.


Rudderless
I love the feeling to this song, it's really reflective, almost tinged with sadness.


It's About Time
There is a bit halfway through this song where Dando sings it's not about you, it's not about sunshine and then Juliana Hatfield chimes in with the most gorgeous SUNSHINE that warms my heart every time I hear it.


Mallo Cup
Early Lemonheads with the beautiful opening line Here I am outside your house at 3 AM, trying to think you outta bed

Mallo Cup beautifully captures why I love The Lemonheads so much. Underpinned acoustic, chiming guitar but with Dando's foot never far from the distortion pedal which he pushes for the chorus and it's all over in 2 minutes 11 seconds.


I forget to forget
I ain't remembered yet


Bit Part
I found it very difficult to choose my final song. My Drug Buddy and Hannah and Gabi are absolutely beautiful songs, and how heartaching and heartwarming is Into Your Arms (a cover version). But this is 10 of my favourites, not 10 of the best. And I LOVE Bit Part, another co-write with Tom Morgan and another with beautiful vocal by Juliana Hatfield to compliment Evan.

I'm a sucker for the Dando and Morgan co-writes. They are so simple yet so clever. This one is only 1 minute and 51 seconds long. Acoustic and electric guitars collide, the lyrics are brilliant, the solo is fizzing and it builds to a brilliant climax with Dando hollering the final verse/chorus - it's all one in this song. Check them flying through it at Glastonbury in 1994.

Labels: 10 of the best, Evan Dando, favourite songs, it's a shame about ray, it's about time, Juliana Hatfield, lemonheads best songs, NME, Smudge, stove, the lemonheads, the outdoor type

I love the Lemonheads too and love this blog. Outdoor Type is my absolute favourite but think I would have to add Different Drum (a cover I know) and Divan in there too! But they've rarely made a duff song!