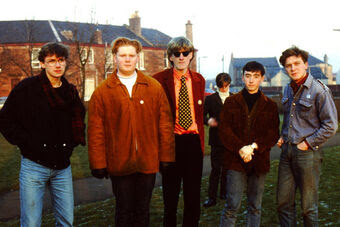 Ahead of a Record Store Day re-issue of their C86 album, I thought I would blog on my top 10 favourite BMX Bandits songs. Adding to previous blogs on 10 favourites from;
My love for the BMX Bandits goes back to 1991 when I was in 5th year at school. It was a time and age when a crowd of people (myself included) started to get passionately into bands, records, the NME, Melody Maker and mixtapes. What a time to discover bands like the Roses, Charlatans, Fanclub, Nirvana, James and R.E.M.  And there were a few who despite being 15 got into the rave and dance culture that was exploding.

So many (if not all) of the aforementioned bands were quick to highlight their friends and influences. So from Teenage Fanclub I was introduced to the Bandits, The Vaselines and The Pastels. A guy a few years above us was in a local band and he made mix tapes for my friend Grant. So his taste kind of got passed down to a few of us in 5th year.

It's funny how I now know many of the people who are in the bands mentioned above. I still find it weird that they know my name! 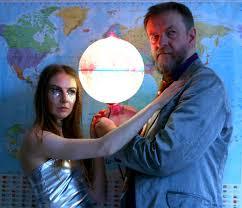 BMX Bandits have released some incredible music over the years and I don't think they necessarily receive the credit they deserve. Duglas' songwriting has developed beautifully over the years and he has surrounded himself with loyal friends and brilliant musicians to achieve the sounds in his head.

The last 4 albums; My Chain (2006), Bee Stings (2007), BMX Bandits In Space (2012) and BMX Bandits Forever (2017) - have really seen BMX Bandits flourish. Rachel Allison and Chloe Philip have helped Duglas write for female vocalists, while Stewart has also co-written and worked with with Dr Cosmos Tape Lab, Anton Newcombe, Plectrum and Cineplexx, also (to my great delight) recording Fireworks which was written by my sister.

As much as I love early BMX Bandits, I think this run of albums and the songs included in them is the most interesting period of the bands career. Listening back to My Chain and Bee Stings was a delight, the songs have aged beautifully, I appreciate them more. You just don't know what they will do next.

I have had to leave out early favourites like Kylie's Got A Crush On Us, Little Hands and Gettin' Dirty and more recent songs like Dot To Dot, To A Flame, Take Me To Heaven and I Wanna Fall In Love.

But my top 10 favourite BMX Bandits songs is pretty evenly balanced from across their career, taking in their debut single, b-sides and some of their most recent material.

If you are new to the Bandits you'll discover love, heartbreak, hope and humour in these songs. I hope you find something you enjoy.

Your Class
Oh what a gem of a song from the aforementioned C86 album. The first time I ever heard this was at a live show when it was built around a bass riff, and little else. The vocal melody, lyrics, flow and feel pull the listener in to hear what is going on in Duglas T Stewart's heart and mind.


The Unforgiven
This song gets me every time. I love the feel of it and it is my favourite vocal from Duglas. I remember speaking to him about the song once and he said he recorded it while he had a cold. I think it was one take and Duglas talked of how he didn't like to record more than two takes, so he kept a natural feel and captured something. I think Duglas and his BMX Bandits captured something very special with this song.


The Sailor's Song
I listened back to this song for the first time in a while as I started writing this blog and found myself listening to it a dozen times over the next day.

Lyrically and melodically brilliant, I also love the way the there is almost an extra line in the verse, in the one noted below, Duglas adds inside and then another line to rhyme with it.


Sometime the medicine don't seem to help
Only your sweet love could bring me back to health
I don't wanna put any pressure you
You could make me feel so good, inside
I want you beside me

I could watch you dancing all night


Next Girl
The b-side to Kylie's Got A Crush On Us. When I was a teenager I once made a 4-track demo of original songs I had written on side A and cover versions I would perform on side B. This song was included.

I think it's a real perfect guitar pop song. I love the flow and the chorus, especially when it is sung twice in a row, leading to a cracking guitar solo.


Witchi Tai To
I try to concentrate on original songs when I write about my top 10 favourites from a band, but I really have to include this cover version that was tucked away on a 4-track CD single.

I have blogged on this song before HERE where you can also find an interview with Duglas.

What more can I say? This is simply stunning. I love when BMX Bandits play it live. You can check a version from their Oran Mor 25th anniversary show HERE


Come Clean
Brilliant guitar pop that builds to the refrain I love you so much inside. I love the lyrics. They are simple, yet clever.


And It's You
What a gorgeous playful melody, I love when the band just let it flow. It's like a little lullaby.


Razorblades and Honey
What a dirty groove! Recorded with Anton Newcombe from Brian Jonestown Massacre. I hope Duglas and Anton get together again as this is sensational.


Serious Drugs
What a stunning song. Sung by Joe McAlinden originally and then Norman Blake on the single, this is the kind of song that led to Stewart being labelled a bedsit Bacharach. Melodic, melancholic, reflective and beautiful with real depth, covering depression with someone longing for love.

I've included the demo version below.

Check out a live version from the BBC Quay sessions in 2018.

I'm so happy that love has come around for Duglas.


I'm so happy that love has come around
I'm so happy about the girl I've found
I feel like someone's favourite meal
No sweetener, no additives, the flavour is real