10 from Belle and Sebastian 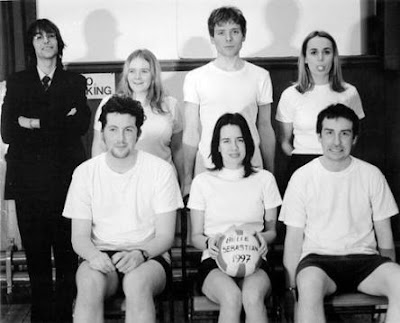 This is the 6th in my series of blogs where I select 10 of my favourite songs from some of my favourite bands. You can check previous blogs here;
Stuart Murdoch recently tweeted that Belle and Sebastian's plans to record their next album in California had been shelved due to the Covid-19 virus. Stuart asked his followers for advice and he seemed genuinely moved by their responses; home recordings, rehearsal room recordings, church recordings, phone recordings ... just make us an album and give us something to look forward to.

Stuart vowed to make the best album possible. This unprecedented situation that we are in might bring out the best in artists. I think we need music and art more than ever to offer escapism from reality.

The first weekend of the lockdown
Drone footage by Kenny MacLeod, Belle and Sebastian's production manager

I first heard Belle and Sebastian on a Mark Radcliffe radio show in the summer of 1996. I vividly remember The Stars Of Track And Field coming on just as I was turning into the driveway of my family home and sitting in the car until it finished. Hushed vocals, beautifully melodic, a gentle acoustic strum that became a groove, chiming guitar, a story, everything building to the refrain/chorus, a trumpet solo, the sound of fingers sliding into new chords.... Belle and Sebastian sounded like nothing else out there. Everything sounded so natural, so perfect.

Belle and Sebastian released two albums in 1996. Tigermilk on Electric Honey (a label run by Stow College) came out in June and If You're Feeling Sinister was released in November 1996 on Jeepster Recordings.

I would highly recommend reading Stuart David's In The All-Night Cafe book. An incredible account of the band forming and leading up to the release party for Tigermilk.

Stuart Murdoch had a crystal clear vision for what Belle and Sebastian should look and sound like. The way he pulled the band together is quite incredible. Murdoch sounds like he was operating on a different level around this time.

Stuart and his band were absolutely prolific, with the quality matching the quantity of songs they were producing. Following on from the 2 albums in 1996, three EP's were released in 1997 and then The Boy With The Arab Strap LP was released in 1998, along with the This Is Just A Modern Rock Song EP.

Almost 50 wonderful songs were recorded and released through 1996-1998. I think this must arguably be the most fertile and special 3-year period by any Scottish band. 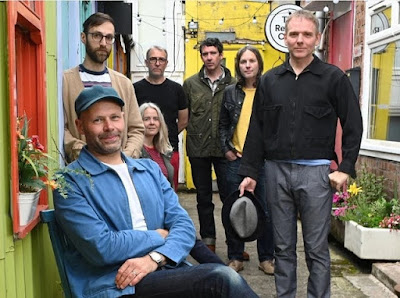 I first caught them live at the Queen Margaret Union in 1997. It was a beautifully ramshackle show. They seemed so confident, yet shy, totally in the zone, completely in their own world and I felt honoured to be allowed in to it.

A band called V-Twin supported and they were incredible. Real psychedelic rock n roll with the lead singer playing a theremin at times. On guitar was Bob Kildea who would later go on to join Belle and Sebastian. As for the Belles, I remember nervous but friendly chatter on stage and the band taking breaks to go out for a cigarette. I can't remember how many people were on stage but they conjured up moments of wonder, real raw soulful, clever, melodic, pop.

Since then I have caught the band live in venues ranging from the Glasgow Uni Debating Chambers, to the Hydro via the Barrowland and the Kelvingrove Bandstand. The Bandstand show in glorious sunshine remains a real favourite Belles memory. Stuart can make the largest venue feel incredibly intimate at times, when he sits on the front of the stage, when he encourages requests, talks to the audience or drops everything to a gentle hush before whipping his band back into a groove.


The Fold Your Hands Child, You Walk Like A Peasant (2000) and Storytelling (2002) (albeit not quite a 'proper' album) LP's passed me by a little. I fell for Dear Catastrophe Waitress in 2003 though, an album full of clever, funny and melodic sunshine pop.

The Life Pursuit (2006) is also pretty upbeat, 60's influences shine through. There was then a 4-year gap to Write About Love (2010) and then 5-years until the synth led Girls In Peacetime Want to Dance (2015).  Play For Today from the latter is one of a number of songs that narrowly missed out being included in this blog.

The band kept busy though with Stevie Jackson releasing an excellent solo album in 2011 and Stuart concluded his long term movie project God Help The Girl in 2014. 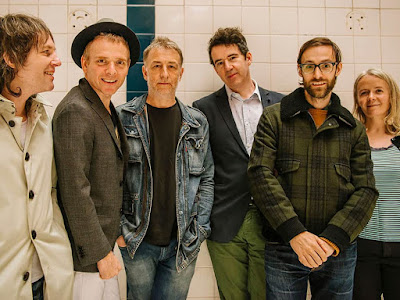 Belle and Sebastian have now released 10 albums, 11 if you count How To Solve Our Human Problems (a compilation of 3 EP's). There is also the incredible Push Barman To Open Old Wounds compilation that rounded up those early  EP's and singles released on Jeepster Recordings. The BBC Sessions captures some beautiful performances.

With so much material I have found it very hard to select only 10 favourites from Belle and Sebastian. There is simply so much to choose from. But here goes;

Dirty Dream No 2
In 2002 my girlfriend (now wife) and I spent 4 amazing nights exploring Barcelona. One night we wandered down some lanes in the Gothic Quarter and heard this song being played from a flat above that had the windows wide open. We stopped to listen and I marvelled at this band from Glasgow being played through a window in Barcelona. The closing section sounded extra euphoric, a stomping Motown beat with strings and horns, the sound of a band caught in a moment.


Judy And The Dream Of Horses
This song is one of my favourites because it is the absolute favourite of my very good friend Wigs. He shouts for it every time we go to see Belle and Sebastian play live.

Stuart's lyrics are a beautiful story. I mentioned euphoria above and I'm going to mention it again here. The instrumental is stunning, the sound of fingers sliding along the fret board against a soaring trumpet gets me every time.


This Is Just A Modern Rock Song
How f**king good is this song? The strummed intro, Stuart's fragile vocal, his exceptional lyrics and the build and surge after the lines I'll go and play with words and pictures, I'll admit I'm feeling strange.

The second half of the song is so clever; I'll only buy a book for the way it looks, then I'll put it on the shelf again and then the lines on the band themselves delivered by Stevie.

This song just melts my heart, it is so perfect.


Best Friend
A couple of years ago Stuart Murdoch contacted my sister Carla to ask if she would be up for writing a song together. And Carla forgot to reply!!! Stuart thankfully turned up at the shop Carla works in part-time to check she had received the email and a mortified Carla was delighted by his persistence.

I'm so glad the two of them got together. It was a huge confidence boost for Carla and the songwriting session brought the best out of the two of them. The melody is exceptionally strong, the lyrics are clever, funny in all the right moments, telling a tale ... all the qualities that Stuart and Carla possess.

Carla wasn't originally supposed to be singing, but Stuart very kindly invited her to do just that. I loved hearing how Carla nailed the vocal in a couple of takes and how impressed the band were.

The song flows beautifully and I really wish I could have seen them perform it live on the Boaty Weekender. Hopefully once we get through these uncertain times there will be a chance to catch Carla singing this with the band some time.

Needless to say, this is a real favourite of mine.


The State That I Am In
Over a Velvets-y groove Stuart Murdoch's thoughts and experiences mix with his imagination, running away on a glorious tale of coming out the closet at a wedding, religion, confession, the reality of turning tables at Marks and Spencers .... gorgeous vocals and yet another incredible melody. Original, beautiful, sublime, magical.


Sleep The Clock Around
A slow burning intro leads to a vocal melody that just spills out of Stuart Murdoch. I love the keyboards in this song, they just drive it along with the band grooving behind. And they really do get into a groove with this song.


And the puzzle will last till somebody will say
There's a lot to be done while your head is still young
If you put down your pen, leave your worries behind
Then the moment will come, and the memory will shine


I Didn't See It Coming
Make me dance I want to surrender, your familiar arms I remember sung by Sarah Martin is such a beautiful opening line to this 'comeback' single by the Belles. Over a shuffling Motown style beat Martin is joined by Murdoch on lead vocals as they sing we don't have the money, money makes the wheels of the world go round, forget about it honey

The song rises gloriously with a synth solo over what is now a stomping Motown beat and then Stuart takes on lead vocals take me on a train, cause I'm not flying, I can see the world from a different side

I love the feel to this song and the way Stuart and Sarah's voices gel, there is a real northern soul influence to this. Make me dance I want to surrender!


Legal Man
A number of years ago some friends and I would book downstairs in a bar called O'Henry's (now the Yes Bar) across from the famous The Horseshoe bar, down a lane slap bang in the centre of Glasgow. This is a song I played quite a few times. I love the choir style backing vocals, the production, the feel, the guitars and the whole upbeat feel to it.


Lazy Line Painter Jane
Yet again Belle and Sebastian capture something truly special. Monica Queen's voice is a dream, lifting the song and things take off and soar around 3.5 minutes in. The band create a glorious racket as Murdoch underpins Queen as they head to the stars. I find this beautifully uplifting, I always feel good when I listen to it, a band in top form.


Like Dylan In The Movies
Just perfect. A groovy bass riff, Stuart's lyrics and melody, the strings, the introduction of electric guitar, the shuffling groove, the rises and the falls.