10 from The Jesus and Mary Chain 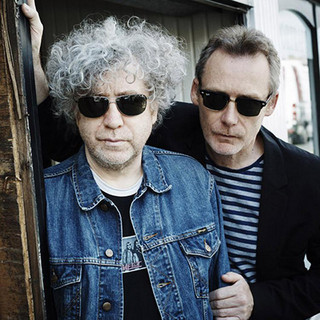 When I was in 5th year of high school a friend in the year above tried to get me into The Jesus and Mary Chain by playing me something on his walkman / personal stereo. For those a little younger than me, this was a little cassette player you could carry around with headphones!

I only listened briefly, as whatever song I listened to sounded like feedback over someone banging metal bins together. I'm not sure what it was, although I suspect it might well have been Upside Down, the bands 1984 debut single which quickly made a mark on the music scene thanks to extreme use of feedback over the top of blurred bubblegum pop vocal melodies.

I wasn't ready for Upside Down and neither was the (lack of) sound capabilities of my friends walkman! Thankfully I tried them again the following year upon release of Honey's Dead and fell for edgy cool like Reverence mixed with acoustic bliss like Almost Gold and there was the pop perfection of Far Gone And Out.

Standing In The Rain

The Jesus and Mary Chain had something. Early on that was hidden behind feedback, shyness, shades and loads of alcohol that meant no-one knew what to expect at live shows, resulting in most being 15-minutes or under with a number turning into violence, most notably the now infamous North London Polytechnic show in 1985. 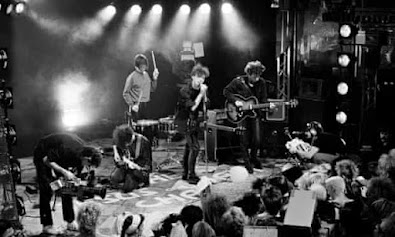 Brothers Jim and William Reid are the heart of The Jesus and Mary Chain. Hailing from East Kilbride on the outskirts of Glasgow, they had been fantasising about forming a band for years. Sibling rivalry meant that at one point they each had their own fantasy band, but finally they brought their songs together, recruited a friend Douglas Hart on bass guitar and formed a fierce bond with Bobby Gillespie of Primal Scream who came across their demos on the flip side of a Syd Barrett compilation tape that a friend had passed on.

Gillespie would replace original drummer Murray Dalglish to form the classic Mary Chain line-up. He played drums standing up like Moe Tucker from The Velvet Underground, Douglas Hart played a two string bass guitar, while the Reid brothers worked their magic. They were a proper gang, in their own world. I would have loved to have seen the band at this point, visually cool, shambolic drunken shows but with that kind of edge that makes a band special. 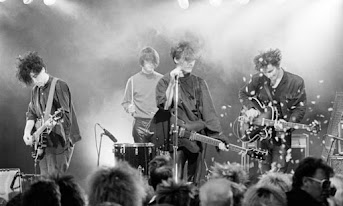 With Alan McGee as their manager, the Mary Chain were a blur of activity; singles, shows, tours, press, controversy and the aforementioned Psychocandy debut LP in 1985.

Second LP Darklands, released in 1987 was almost entirely the Reid brothers who had learned a great deal since bursting on to the scene in 1984. Feedback was banished for melodies, a drum machine was used (Gillespie had left to focus on Primal Scream) and the album dripped with quality like the title track, Happy When It Rains, April Skies and About You.

The Mary Chain were prolific; Automatic was released in 1989, the aforementioned Honey's Dead in 1992, followed by Stoned and Dethroned in 1994. By 1998's Munki album, the relationship between the Reid brothers had deteriorated to the extent that each would go in with the rest of the band to record their own songs, but their sibling wouldn't be there.

2017's Damage and Joy brought new songs, together with some of Jim's work under the name Freeheat and also songs from the brilliant Sister Vanilla album Little Pop Rock (the Reid brothers with their sister Linda) that I blogged on HERE.

Quite what the Reid brothers will do next is anyone's guess. However, they are taking my own personal favourite album of theirs, Darklands, out on tour ... finally, after numerous postponements due to the pandemic. I can't wait to see them at the Barrowland.

JAMC have an extensive back catalogue that includes some brilliant b-sides. The digital editions of their albums are expanded with all kinds of b-sides, demos and session tracks. This is the first time I've written a 10 from blog and discovered a song I hadn't heard before that I included in the blog.

So here, at the time of writing, are 10 of my favourite songs by The Jesus and Mary Chain. About You, Girlfriend, The Two Of Us and I Love Rock n Roll are other real favourites. 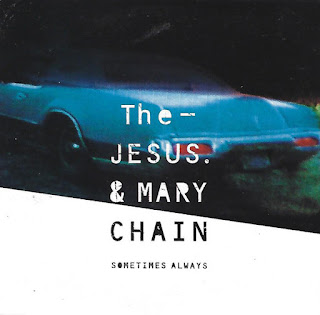 I've mentioned Sometimes Always a number of times in the blog, notably on my 10 from Hope Sandoval feature you can check HERE. What more can I say?! It's one of my all-time favourite songs, guitar pop perfection. The contrast between Hope's dreamy clear vocal and Jim's velvets-y drawl is just so cool.

I just love the groove to this. The Mary Chain sound super cool, William Reid's guitars chime at times, they soar at others. This reached number 8 in the charts in 1985, the Mary Chain had kicked in the doors.

Hey honey what you trying to say

As I stand here don't you walk away

And the world comes tumbling down

Why'd You Want Me - alternate version

The b-side to Far Gone And Out in 1992, Why'd You Want Me has William Reid on lead vocals and also conjuring brilliant little guitar riffs. The lyrics are almost classical Mary Chain, mentioning sin, the blues, drink, drugs, night, light and asking that simple question - why do you want me babe?

If I was writing a blog on the 10 songs I consider to be the Mary Chain's best then this wouldn't feature. But I love it's purity and simplicity, it's a real favourite.

Everything about this is super cool. Released as an EP in 1986, the song would later end up on the CD version of Psychocandy. It highlights how prolific the Reid brothers were. Some Candy Talking is like transporting The Velvet Underground into the mid 80's. That good, that cool.

There has long been debate about whether this is about sex or drugs. For me it sounds and reads like it is definitely about the chase of a thrill as a teenager - sex.

But it's too much for a young heart to take

Cause hearts are the easiest things you could break

Quite a lot happened between the release of Psychocandy in 1985 and Darklands (the album) in 1987. The Reid brothers became a lot more confident in their songwriting and musical ability. William Reid was heavily involved in the production. Perhaps the biggest change was that Bobby Gillespie was no longer the drummer, he'd been replaced by a drum machine.

Strange as that sounds, it worked out well for all parties. Darklands is my favourite Mary Chain album. I also consider it to be their best. The title track, the opening song on the album, at 5 minutes 29 seconds long, leaves the Mary Chain loads of time and space to create something truly magical.

It's so unrushed, William picks a riff and occasional big chord comes crashing in. Jim is all poetic, there are the pop du, du, du, du, du duuuu bits, it's got that Mary Chain cool, but this time it's majestic with it.

And I awake from dreams

To a scary world of screams

And heaven I think, is too close to hell

Something I Can't Have

I only discovered this song when going through the JAMC catalogue for this feature. What a song! The Mary Chain at their rip roaring best; sounding cool, in a total groove, guitars blasting, flowing vocal melodies. Check them blasting through it on Later with Jools.

This was tucked away on the 1993 Sound of Speed EP and the subsequent compilation album of b-sides and rarities of the same name. By 93 the band had released 13 singles and 6 E.P's in addition to their albums, so they had plenty of material.

This has very quickly become a real favourite.

And we could kiss with tongues

I've got no place to go 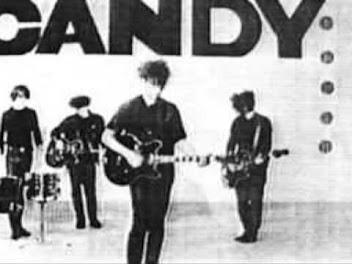 I mean, come on, this is just so perfect. The drums half-inched from The Ronettes, just the right amount of distortion, the way the riff kicks in for the instrumental, Jim Reid singing I'll be your plastic toy, the way Karen Parker's vocals come in for the prolonged just like honey refrain and outro.

Memorably used in the closing scene in Lost In Translation, Scarlett Johansson would later go on to perform it with the Mary Chain at their comeback show in Coachella.

And the way I feel tonight
I could die and I wouldn't mind
And there's something going on inside
Makes you wanna fell, makes you wanna try
Makes you wanna blow the stars from the sky
I can't stand up, I can't cool down
I can't get my head off the ground

Far Gone And Out 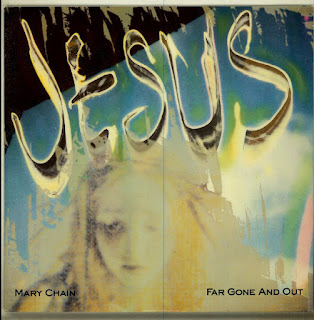 So yeah, I did mention this song early in the blog and yeah, it is in my top 10. As a kid getting into alternative guitar pop music this just seemed so perfect, so right, so cool. Like it could have been made in a garage, but it's just got that little bit more of a pop tinge to it, in all the right ways. They hey, hey, heys, the beats, the guitars going full on fuzz overdrive at all the right times. I love lines like I'm television sick and I'm television crazy and the line about taking thoughts to the railway station. Most of all I just love how this comes across as the sound of a band having fun.

I can't explain, exactly what I'm doing, standing in the rain

Don't do it for fun, do it if you feel it, kiss it on the tongue

Happy When It Rains 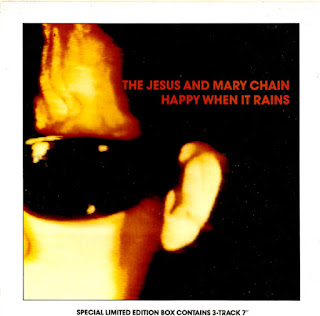 The way things lift with the and we tried so hard break into the chorus which has shimmering guitar and Jim Reid singing about being happy when it rains, happy when it pours ... it's spine tingling to hear a band in this kind of form, totally on it.

When it breaks to And I'm happy when it rains at 2 minutes 39 seconds it sounds like Jim is defiantly happy, leading to a short breakdown instrumental before going back to the refrain.

Previous 10 from blogs (all at the time of writing)

13. Echo and the Bunnymen