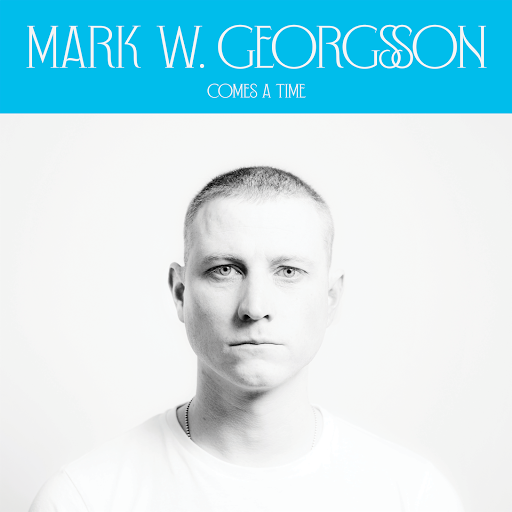 Mark W Georgsson is one of my favourite artists. I got to know Mark a number of years ago when he was in a great wee band called Velveteen Saints and we have stayed in touch. Mark lives and breathes for music and I felt that shone through in his beautiful 2017 debut album Faces and Places .
Mark's shows to accompany his album, whether solo or with his friends in his band, were a joy. Warm, intimate, melodic and natural - in the music and in the playing.
It's taken a while for Mark to produce the follow up, but Comes A Time is out now on Last Night From Glasgow and for me it's perfect timing, just as the nights are drawing in, this is an mini-album to warm your soul.
Ode to Rannva is a beautiful opening song, Mark's voice sounds as good as I have heard it, gentle and true, the music builds to some beautiful epic moments.
True happiness is what means most to me
Waiting for You sounds like a lost George Harrison & Paul McCartney collaboration, a jaunty romp with a psychedelic drop in the middle before picking up the beat again. The jam at the end contains an outrageous piano solo that lead the band to closure in style. I'd love to see and hear this live. 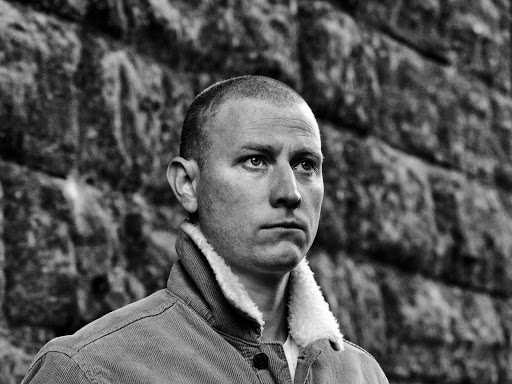 Mark demonstrated his romantic soul and nature on his debut and he wears his heart on his sleeve with True Love, a tender celtic ballad featuring gorgeous pedal steel guitar (Tim Davidson) and viola (Anja).
Celtic Americana could be a new genre that Georgsson establishes, One of a Kind sees him at his charming best, with stunning strings adding an extra dimension to his sound.
A true beauty like you is hard to find
As a heart like yours is one of a kind
Hanging Around starts from a gentle riff, light brushes on the drums back Mark as he sings tenderly before the song lifts gloriously for a catchy sing-a-long chorus.
Mark co-wrote this song with Kieran Webster form The View. Mark has this to say -  It's a very honest song about addiction, dependencies, ups and downs, highs and lows. But it's also about hope and hanging on in there, and fighting for yourself and the people you care about and love the most.
The title track is lush and heartfelt, at times the vocal is only accompanied by a barely strummed acoustic and atmospheric sounds from JJ McGowan on vintage Space Echo, the second half of the song builds to a dramatic conclusion
What I say to you only skims the surface of my mind
Baring all my thoughts and dreams together with lost time
Comes A Time is available on vinyl from Last Night From Glasgow and digitally from all the usual places.
Read on for an interview with Mark. 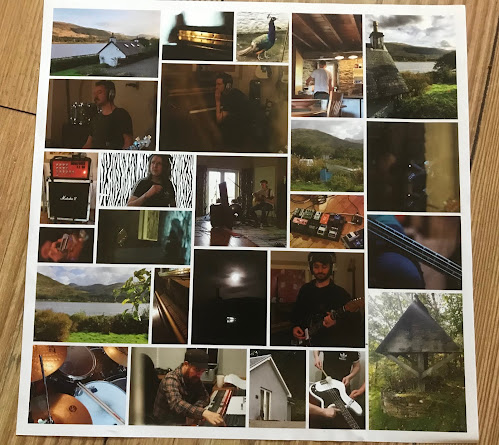 How are you doing? What has life been like during the last six months?
I'm really good, cheers. To be honest, I've been totally fine over the last six months and throughout most of lockdown, but I do know that I'm very lucky in that sense as I know a lot of people have really struggled.
I found myself having a lot of time to reset my body and mind by trying to exercise and work out most days and just try to be as positive as possible. I learned a wee bit of piano, read a bit more, listened to a lot more music, I even dabbled in improving my Icelandic (it's absolutely solid to learn by the way!)
I found myself reflecting on a lot of things and the things in life that are important to me, or should be. I also found myself taking the time to reconnect with a lot of friends and family that I hadn't spoken to in a while where we'd all been "too busy" to previously and that was great.
Don't get me wrong, I really missed not being able to actually catch up with friends and family properly by going to the pub, the football, a gig, or popping round to someone's house, simple everyday freedoms and things that we all take for granted.
And what have you been up to musically since the release of your debut album? Did you set out to write a collection of songs?
After my first album Faces and Places came out in 2017, I toured it with a Scottish Highlands and Islands tour and played quite a few festivals and gigs over in Iceland and the Faroe Islands as well as playing some really great support slots like Chance McCoy, Asgeir and Junius Meyvant too, which were all really cool.
I'd been sitting on a few songs and musical ideas that didn't fit the vibe of the first album and I decided that I wanted to explore a different sound and direction and actually try to and record a mini-LP that was clearly different from the first record.
I had quite a clear vision of how I wanted it to sound and flow, and I always knew it was going to be called Comes a Time so it was great to get stuck into those initial ideas as well as trying to revamp older songs and write new songs in a different way from how I had previously to try and fit the idea that I had in my head for the new record. 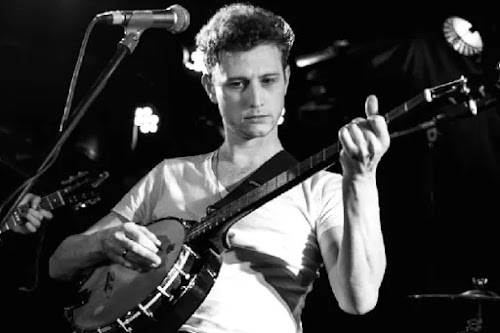 So many friends were involved on your debut release; musicians, photographers and producers. Who was involved this time?
I like having a lot of friends and people involved in my music, whether that be in the studio or playing live. I'm a people person, although I also like playing and recording solo too when the gig or song suits it.
I roped in quite a lot of friends for this record too, albeit most of whom weren't involved in the first album. Like I said, I had quite a clear vision for Comes A Time and how I wanted it to sound. The first person I asked was my mate JJ McGowan. JJ is an amazing guitarist and all-round excellent musician with a great touch and feel and a real ear for sounds, layers and sonics, so I asked him to play and to help produce the EP with Jim Lang recording and engineering it.
I asked my good mate Michael Gahagan to play drums and percussion, Dave Brown was on bass and Robbie Noble played piano and keys. We rehearsed all of the songs as a band except the two acoustic tracks, unlike the first album which wasn't rehearsed that much at all and was more live and improvising sounding.
The majority of the mini-LP was recorded in a beautiful cottage overlooking Loch Fyne which was a really nice chill out vibe and experience for everyone. Some of the overdubs were recorded back at Jim's studio flat in Glasgow where some more friends such as Emme Woods, Tino Macdonald, Tim Davidson, Pedro Cameron and Anja Ormiston all kindly lent their talents to the songs.
The strings for the lead single One of a Kind were arranged and recorded in Reykavik by Arnar Guojonsson and there are also two co-writes on the record; Waiting For You was written with an old school pal of mine, Gordon Andrews and Hanging Around was written with Kieren Webster of The View.
As for the cover photography for the single and mini-lp, the legend that is Brian Sweeney was involved again.
Comes A Time is out when there are unlikely to be opportunities to tour or play a launch party. Will you be doing anything differently?
The record just came out on 14th August, so I'm still trying to promote it as best as I can online and hopefully people continue to buy the vinyl, digital or listen to it whatever way they choose.
I'd had another Scottish Highlands & Islands Tour scheduled for September to promote the EP which has obviously been cancelled, but I'm hoping to reschedule that for Spring / Summer next year taking in places like Orkney, Shetland and a few other places and venues that I've never been to before, which is exactly why I love travelling and playing up north and all over Scotland, going to new places and meeting new people. But with the way things are just now, I'm just going to take it easy and take things as they come, wait to see what happens.
What music are you listening to at the moment? And did anything influence the songs on this album?
Over the last week or so I've been listening to The Redwalls - De Nova, Turin Brakes - Lost Property, Oasis - The Masterplan, Lau -Ghosts, The Hummingbirds - Moving On and The Beatles - The Beatles (The White Album).
Also new / recent songs and records by Barrie-James, Willie Campbell, Kris Drever, Cara Rose, Scott Forsyth - a fantastic Glasgow based guitarist who is releasing very interesting country stuff righ now and Declan Welsh and The Decadent West.
As for influences on the new record, musically / sonically ... The Beatles, Sigur Ros, Neil Young, Semisonic, Lynyrd Skynyrd and Dinosaur Jr to name a few. Not to mention the people and experiences that the songs are actually about.
Are you writing anything at present? And in the absence of gigs, do you have any plans to do anything online?
With the new record just out, I'm concentrating on giving that as much time as I can to push it first. So, I'm not really in a rush to write anything new at the moment. I do have a few ideas sitting around, plys a possible writing collaboration that I might explore if and when I feel the time is right, but I don't like to force the writing process these days.
As for online gigs and stuff, that's not really for me, not that I've got anything against it, but basically I'm technologically inept and useless at that kind of thing.
I actually watched quite a few online gigs and streams during and after lockdown, one which I think is absolutely top notch and is on most Wednesday evenings, Zoe Bestel - live, check her out, an incredible singer and ukulele player.
Posted by everythingflows at 08:24