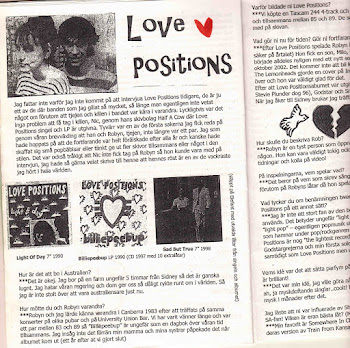 Cover version of the month #59

The Lemonheads cover Love Positions – Into Your Arms

Welcome to a special bonus cover version of the month blog by my sister Carla.

It's a cracker on the beautiful Into Your Arms by The Lemonheads, probably the first band we bonded over many, many years ago. The song was originally written by cult Australian duo Love Positions (Robyn St Clare & Nic Dalton) who recorded songs with a Tascam 244 4-track on to cassette in various houses in Melbourne, Carnberra and Sydney between 1985 and 1989.

The results came out as the album Billiepeebup on their own Half A Cow Records in 1990. Evan Dando, then touring Australia with The Lemonheads, became friends with many Australian bands including Smudge (he covered a number of their songs and also co-wrote many with Tom Morgan) and Love Positions.

Anyway, enough from me, over to my sister. I think I'll try and get her to write another blog soon!

I've been a fan of The Lemonheads since I was 7. That's what age I was when their cover of Mrs Robinson was released and it became the first 7” in my record collection. I've still got it all these years later. The paper sleeve is torn on every edge possible and the surface is scratched to fuck though, unbelievably, still manages to play without skipping. The B Side is Being Around – one of the greatest love songs of all time. It almost harks back to the girl-group songs of the late fifties and early sixties, so many questions are asked but instead of will you still love me tomorrow we are asked if I was the fridge would you open the door? After all these years, the sentiment is the same. Will you accept me?

I accepted The Lemonheads wholeheartedly into my life at a young age. Interviews and performances of them were duly recorded off the TV onto VHS labelled 'Murray Only – DO NOT TAPE OVER' and I would watch these snippets for hours. My mum wasn't happy when Alison's Starting to Happen came on the cassette player in the car on family holidays to the East Coast. Probably because of the mention of a pierced tit (it was the nineties afterall) but I didn't care about that. All I cared about was that she was the puzzle piece behind the couch that makes the sky complete. That line stuck out like a diamond to my young ears and it's still one of my favourite lyrics of all time.

Imagine being in my twenties and supporting Evan and Juliana at SWG3 with my band TeenCanteen. I could barely contain it. We got paid 30 quid to be the only support at a sold out show but really didn't give a fuck about the pay. And yes – before leaving I did swoop around the stage and gather up the set lists and handwritten notes of forgotten lyrics before leaving. I'm not ashamed.

What I've always loved about Evan's songwriting is his ability to say so much with so little words and his nursery-rhyme-esque melodies. By that I mean, they seem so obvious that they must have just fallen out of the sky. Into Your Arms was always one of my favourites.

I know a place where I can go when I'm alone 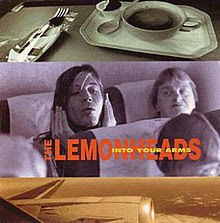 It's beautiful in it's clarity and simplicity. I guess I was so young when I first heard it that I never questioned it NOT being a Lemonheads song. Imagine my surprise when my brother sent me the link to Love Positions version of this love canon last year. My mind was, considerably blown.

And if I should fall
I know, I won't be alone
Be alone anymore

I read a book on Wabi Sabi a while ago – traditional Japanese aesthetic involving impermanence and the acceptance of all that is imperfect and transient. It's a small, fairly unassuming book and I've leant it out to so many friends over the years I am sure it has been half way around the globe by now. Anyway, I'm not bringing up Wabi Sabi or trying to demonstrate whether or not I am well read, but merely because Love Positions recording of their song Into Your Arms is so wonderfully imperfect it's perfect. It's Wabi Sabi. I love it because it's imperfect. Love is imperfect.

Written by Robyn St Clare in 1989, Into Your Arms appears to have been released on their album Billiebeepup in 1990 on Half A Cow Records in Australia (naturally went looking for a copy on Discogs). Other half of the band, Nic Dalton, went on to join The Lemonheads in 1992 and thus the song ended up on the 1993 Lemonheads album Come On Feel The Lemonheads. So now we know how it ended up in my ears originally. But to get back to the Love Positions original recording...

It's 1 minute and 38 seconds of utter gorgeousness. A gently strummed acoustic guitar starts things off before a whisper of wind chimes introduces Robyn's wonderfully naïve voice. That nursery rhyme melody shines through but this is so lush in it's simplicity it's almost lullaby like. A verse, a chorus, a verse again. A guitar, some shimmer and a vocal. It's like listening to an intimate thought or secret. And maybe it is? Maybe it's a daydream walking down the street and realising you are with exactly who you are meant to be with right now. And sometimes that's all you need in a song. And sometimes we just need the rawness and immediacy of 2 musicians recording a song exactly at the point they figured it out and not before they could overthink it. I will always love The Lemonheads version of this song, but I have a place in my heart for both. The declaration by Evan and the inner thoughts of Robyn.

A list and links to all previous cover version of the month blogs is below.