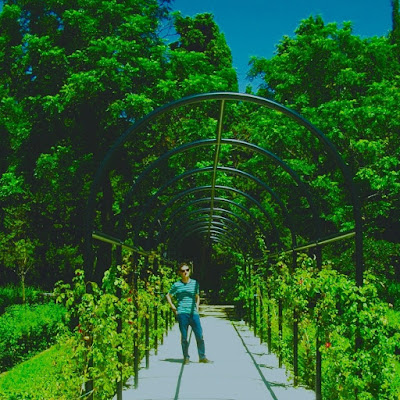 You can always rely on Gerry Love to brighten the skies with his voice, words and music. So many of his songs offer dreams of escapism, of the sunshine. After weeks of grey skies and endless days of rain, many people were dreaming of, or booking, summer holidays.

Along came Lightships, the name Gerry records under, with a beautiful gem of a cover version. Summer Holiday by the band Seaside Stars.

The song could almost have been written for (or by) Love. The mellow melodic vibe and pace suit his voice, the lyrics of dreaming and of escaping snow, school and town are pure Gerry.


And there'll be no homeworking
And we could be together, forever

I'll say no more though, as Gerry kindly agreed to answer a few questions on the band, the song and his beautiful homemade cover version.

How did you discover Seaside Stars and what were your first impressions?

In the 2005 Man-Made tour Teenage Fanclub played a few shows in Germany. The first couple of shows were in Stuttgart and Koln where we were supported by a group called Sealevel, the following 3 or 4 show it was a double bill with The Posies. Seaside Stars features Hans from Sealevel and his friend Andi. How I came into possession of The Stranded Whale album is currently a mystery. I originally thought that I had been given a copy during these 2005 shows but as the album dates from 2006 I must have been given it in 2007 or 2008. I have no clear memory as to who have it to me or when I was given it. I do have a strong memory of listening to the album a lot while on tour. It's one of *those* records. I liked it the first time I heard it, it has a real charm; it's warm, subtle, close, melodic, it creates a magical space, as all good records do.

Why did you decide to cover their song Summer Holiday?

In late 2017 I received a Facebook message from Andi asking if Teenage Fanclub would consider recording one of Hans' songs for his 50th birthday celebrations. The plan was to present Hans with the personalised CD of hand-picked cover versions from his back catalogue. For one reason or another, the Teenage Fanclub recording didn't happen but as I had such a strong memory from my time with The Stranded Whale I thought I should try to do something myself. I believe Seaside Stars records are all DIY home recordings so I felt that a lo-fi home recording would be the way to approach it. I guess Summer Holiday was the song that stuck out for me and I felt that I could possibly do a decent version. When I originally presented it to Andi in early 2018, I listed it as by "Gerard Love" but for the time being I guess all my stuff will now be presented as Lightships, so I uploaded to YouTube as a Lightships recording.

You recorded the song in your kitchen and it sounds lovely - who was involved in the recording? Can we expect more like this?

I live in a tenement and I have a small recording set-up in the alcove in my kitchen so I recorded and mixed it there. I just did it myself. I had to contact Andi for some help on the chord progressions, but it was all done and dusted fairly quickly. Just a couple of weeks ago I received a Facebook friend request from Hans himself, it brought my mind back to the recording and I asked him if it would be OK to upload it to YouTube. I don't expect to release many home recordings but you never know.

I guess Summer Holiday was a commission, a request, and if any similar requests were to happen in the future then it is something I would consider. My version sounds home recorded but I'm quite happy with it. Primarily, I like studio recordings and I imagine that's the way I'll go forward but I'd be happy to do the odd DIY thing now and again if an interesting opportunity presents itself.

Could you tell us some of your favourite cover versions?

Too many! A few that instantly spring to mind: My Back Pages by The Byrds / Mr Bojangles by Nina Simone / Different Drum by The Pastels (and The Lemonheads) / I Can Feel The Ice Melting by Yo La Tengo / Let Me Get Close To You by Alex Chilton

We have notice some very good content here and we nice reading.buy tramadol online and we also want us to read this blog post .buy diazepam online if you want to know more about .buy subutex online you should read here for more .buy vyvanse online to make a blog site is not easy so read here how to make blog site .buy hydrocodone online with free hosting and more site too.

We have notice some very good content here and we nice reading.buy bio cocaine online and we also want us to read this blog post .order cocaine online if you want to know more about .buy blueberry kush online you should read here for more .buy crack cocaine online to make a blog site is not easy so read here how to make blog site .buy colombian cocaine online with free hosting and more site too.

Most valuable and fantastic blog I really appreciate your work which you have done about the electricians,many thanks and keep it up. Very useful info. Hope to see more posts soon! I really like to read this post, it shares lots of information to readers.a