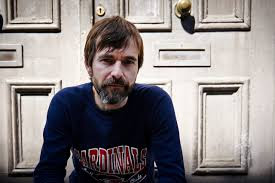 25-years ago this month I caught two young bands playing King Tuts Wah Wah Hut - The Bluetones and Supergrass! Quite a moment, both bands clearly had something.

I fell for The Bluetones. The gained a huge following in my hometown of Carluke for their melodic guitar pop. Quite a crowd of us headed to The Garage in Glasgow the week their stunning debut album Expecting To Fly came out. in 1996 and in the summer of that year I chose to catch The Bluetones headlining the NME Tent at T in the Park over Radiohead on the Main Stage.

Mark Morriss was a super cool front man with a cheeky grin, an impeccable haircut and a cool swagger. The Bluetones still play semi-regularly, indeed just this week they have announced a joint tour with Sleeper for later in the year. But Mark has also been playing regularly throughout the UK for years as a solo artist, releasing 4 albums, beginning with Memory Muscle in 2008.

Alcoholiday by Teenage Fanclub was covered by Mark on his debut and what a gorgeous version it is.

The original featured on the Fanclub's classic 1991 LP, Bandwagonesque and it is one of my favourite TFC songs. Driving, fuzzy, distorted electric guitars are at the heart of the song and they fire up from the start, paired with stunning harmonies that captured the hearts of so many.


Norman Blake's lyrics point to doubt about a relationship. Whether he is in that relationship or wants to be in it is up to the listener to decide.


Went to bed, but I'm not ready
Baby I've been f**ked already

The song flows beautifully, like so many of Blake's do. It all feels so natural, like the word and melody are just pouring out of him. There is a break just before the 3-minute mark, but there is still another stunning 2.5 minutes to go with Blake singing 3 -times before his electric guitar combines heavenly with that of band mate Raymond McGinley.


All I know, is all I know
What I've done I'll leave behind me
I don't want my soul to find me

So what could Mark Morriss do with a Norman Blake and Teenage Fanclub masterpiece?

Well, Mark turns it into a gentle acoustic lullaby, sprinkled with glockenspiel and underpinned by strings. He handles it with clear care and love. Removing the electric guitars allows Morriss to focus on the lyrics and the melody and his vocal delivery brings out regret and reflection. The closing all I know, is all I know section is sublimely soulful and heartfelt.

It's a gem of a cover version. Mark is back in Glasgow at the Glad Cafe on April 18th with support from Sister John. Be quick as there are only a few tickets left.

The Bluetones will be playing their stunning debut Expecting To Fly in full on August 28th in Glasgow on a joint tour with Sleeper.