Starry Skies at The Doublet 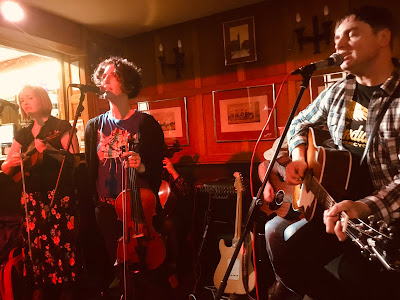 On a cold and wet afternoon, on Saturday 29th February, hearts were warmed and melted by the Starry Skies in the intimate setting of The Doublet bar in the West End of Glasgow.

You can read about the background to the show in my interview with Starry Skies leader Warren McIntyre from last month.

Warren is a real charmer and he began the afternoon by playing two songs on his own, leaning against the wall with just his acoustic guitar for company. You could have heard a pin drop as Warren's tender vocals and gentle melodies set the tone for the afternoon.

Joined by 3 string players and an electric guitarist, the Starry Skies put on a real treat for the crowd. Loving You was absolutely sublime, the way Warren's voice gelled with Heather (violin), Jen (cello) and Sophie (viola) was utterly gorgeous.

I think I can safely say that everyone in the room was pretty spellbound, lost in the music being conjured up within touching distance from many seats.

I'll Be There For You is a gem of a song and the upbeat Love Come Back To You closed a brilliant first set that mixed some of Warren's earliest songwriting efforts with songs from the Starry Skies Ask The Animals and Be Kind albums.

After a short break we had a two song set from one of Warren's friends who was over from Sweden. It was that kind of afternoon - friendly and welcoming.

The Starry Skies then introduced Sweet Honey Blue which will be their next single along with other songs from their next album that should be out in August.

The audience were captivated by Warren's lyrics and voice, by the harmonies, the melodies and the strings. It was a very special show, with an excellent audience sing-a-long before the afternoon ended with a stunning cover version of Warren's favourite ever song, Georgia On My Mind by Ray Charles.

The Starry Skies will be playing a full band show at the CCA in Glasgow on Saturday 22nd August to launch their new album Do It With Love. FACEBOOK EVENT 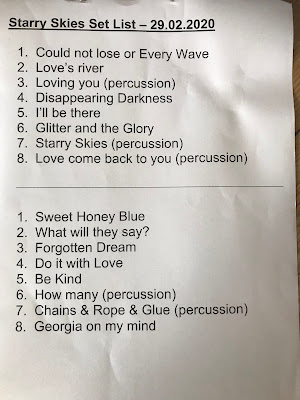