Supergrass at The Barrowland Ballroom 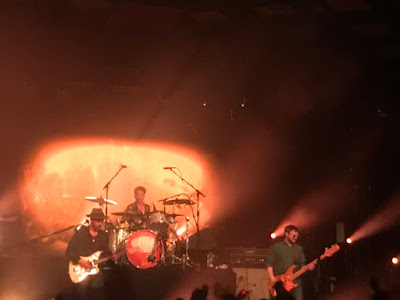 10-years after they had said goodbye to their fans in the Barrowland Ballroom, Supergrass returned to say hello and remind people what a fantastic catalogue of songs they had produced, by delivering a blistering high-energy pop punk show from start to finish.

A short promo film of homemade video footage from the bands career played on a big screen and then before we knew it, the band were onstage and ripping and roaring through Caught By The Fuzz. Gaz Coombes on guitar and lead vocals, Mick Quinn on bass and backing vocals and Danny Goffney on drums and backing vocals sounded superb as they blitzed their debut single.

Joined for much of the set by Rob Coombes on piano and keyboards, the band clearly enjoyed themselves and the youthful energy of their songs, many from their teenage years and early 20's, sounded blissful.

The guitar riff of Diamond Hoo Ha Man backed with a kick drum kept the pace up as the crowd clapped along. The stoned melodic groove of Mary slowed things down briefly and if you needed reminding of how easily Supergrass could throw in little hooks then you had received a lesson in 3 songs.

Moving was a real highlight, it seemed to be really beefed up for the got a low, low feeling around me section, the place erupted. I said to my brother several times through the show that the sound was incredible, the sound engineer had really nailed it.

After another few songs including a romp through Mansize Rooster, the band departed the stage and another short film was shown before the band came back on and launched into In It For The Money from their 1997 album of the same name.

Supergrass make so much sense live, Danny Goffney was whirling like Keith Moon on the drums, Coombes was sounding great on guitar and vocals and Mick Quinn thundered through some bass riffs. They looked and sounded magnificent. 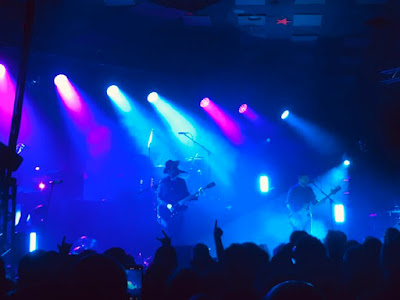 Going Out was sublime, even without the horns, running into a nice little jam at the end, then Lose It, She's So Loose and into Alright, the band were on fire. And then Sun Hits The Sky was another real highlight for me, so powerful and again the band jammed on at the end.

Strange Ones, Bad Blood and a huge Pumping On Your Stereo, which the crowd started singing before the band started, ended a really cracking show.

Coombes highlighted the bands love for the Barrowland a couple of times. I hope they will be back.