I have been fortunate to catch The Vaselines 3 times in as many months; in June supporting Mogwai at the Barrowland Ballroom, headlining the Scooter Tent at the Wickerman Festival in July and last night, headlining the brilliant Summerhall venue in Edinburgh. They are in blistering form.

Summerhall was exceptionally buzzy on a warm summers evening mid-Edinburgh Festival season. Pop up bars had been set up in the courtyard next to the superb The Royal Dick pub.

The Vaselines had asked TeenCanteen to support them and with doors running late it meant that there was a sizeable crowd queuing up to get in by 9pm. TeenCanteen came on at around 9.15pm and told us that this was there first full show since February; they had been busy writing and recording, alongside putting on the fabulous Girl Effect night in aid of Scottish Women's Aid.

They played superbly, confident, having fun, introducing their debut single Honey like a lost friend, second song Friends was absolutely superb and the New Order bass groove towards the end of second single You're Still Mine got a great response. Then it was on to the new songs; Sirens had been debuted on their recent 6music session and it was absolutely superb, Dancing (Hey You) slowed things down, almost Joy Division like at times in terms of sparseness. Closing with Sister to a packed hall and a great response, TeenCanteen definitely won some new fans with their 3-part harmonies, clever lyrics, melodies and passion. 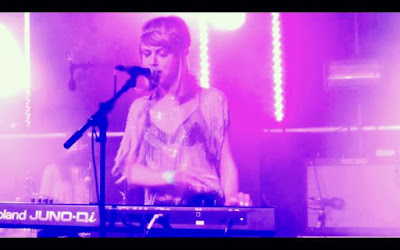 The Vaselines came on swiftly and played an exceptional set of power pop punk perfection. 3 guitars gelling together to sound absolutely sensational with Scott Paterson from Sons and Daughters in stunning form - firing out riffs and making it all look incredibly easy.

Eugene and Frances were hilarious between songs, the chemistry between them is pure and true, Frances seemed a little tipsy and they laughed that it only took 6 songs for her to mention vagina's!

Due to the fact things were running late the band absolutely blasted through the second half of their set, firing through 2, 3 and 4-minute guitar pop punk gems. Eugene was in brilliant form, clearly enjoying the sound on stage, the way the band were playing and the response from the crowd. 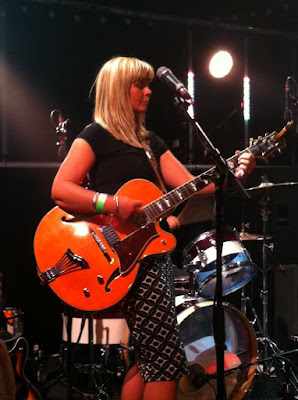 Frances in action - photo by jock'n'roll

Highlights - well the whole set was superb but here goes;

High Tide Low Tide set the tone as an opener; powerful and melodic, the guitars sounding superb. I Hate The 80's was in the same vein.

The Day I Was A Horse was absolutely brilliant. Under 2-minutes of trippy, fuzzy, punky guitar with the vocals spat out by Eugene and Frances. The original is almost lo-fi, the modern Vaselines with 3 guitars turned up to the max take it to another level.

Lovecraft was just fired down our throats, the clapping style guitar riff was powerful and playful, Eugene and Frances' vocals contrasting but sounding like they were meant to be. Sex Sux Amen has been a real standout from the 3 shows I have seen The Vaselines play recently, a joyful romp.

Eugene asked TeenCanteen to join in the fun on Molly's Lips and Carla and Sita played the horn parts and amazingly Eugene got through the song without laughing. 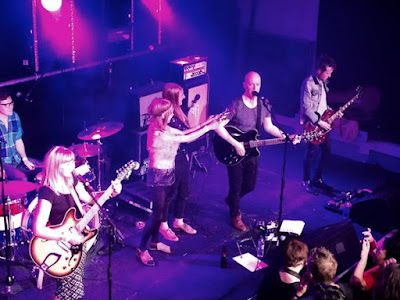 Son Of A Gun is more akin to the Nirvana cover than the original these days, Frances vocals sound as innocent as they did back on the original but the guitars are ferocious and all the better for it. Dying For It is up with Sex Sux and The Day I Was A Horse as real standout and thankfully The Vaselines responded to chants for an encore to come back on and ram it down our throats.

I was fortunate enough to catch up with Eugene briefly after the show and he agreed that the band were in great form, they were enjoying it and will hopefully be playing some more shows before the end of the year - fingers crossed! 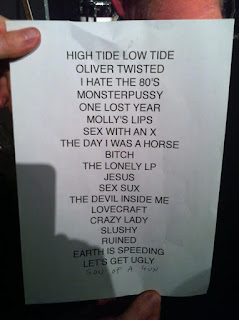