Crash Club at Everything Shakes 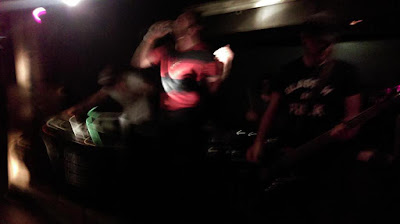 Crash Club may well be the best live band in Scotland right now. I was genuinely blown away by their performance on Friday night at The Admiral at the inaugural Everything Shakes night.

Raw, powerful and fluid Primal Scream style basslines underpin (and at times lead) all kinds of electronic goodness, live beats and psychedelic guitar - at times like My Bloody Valentine. It is a powerful combination that is made all the better by the fact that Crash Club just don't let up. They have honed and toned their live set to perfection - just over 30-minutes flowing from one song to another with no let up, like a DJ set or mix album.

Ian MacKinnon strolled on stage to join the band for a couple of songs including the outstanding Recondition. MacKinnon's vocals just lifted the set even higher, producing real moments of euphoria and adding extra menace to the Kilwinning's outfits set.

Neal McHarg on bass is almost like a front man, playing bass with a mission, wearing a 'Glasgow As F**k' t-shirt and firing off riffs that demanded people move. His brother Aran never strayed far from his amp, creating all kinds of beautiful guitar sound, while the leader of the band Sammy bounded behind a bank of synths and screens, live drums keeping it real.

Crash Club play Belladrum this coming weekend. Seek them out and keep an eye on their Facebook page for upcoming gig announcements.