Laugh At Me - Sonny Bono

On Friday night my good friend Gordon pulled a battered looking 7-inch record from his bag, placed it on a turntable, dropped the needle and let it play. There was a hiss and a crackle and then it kicked in. It sounded absolutely sensational; warm, raw, vital and urgent.

Gordon was punching the sky, singing a-long with that sense of sheer abandonment that a good song can make you do.

I had to find out who it was, it sounded pretty Dylan-esque. The song was by Sonny Bono and it is called Laugh At Me. 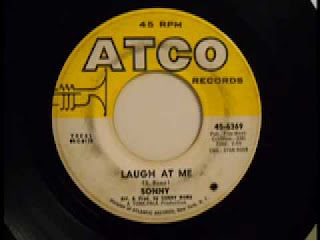 Listening back now I clearly missed the intro as Sonny introduces the song;

“I never thought I'd cut a record by myself but I got somethin' I wanna say. I want to say it for Cher and I hope I say it for a lot of people”.

In under 3-minutes, Sonny delivers an absolute masterpiece over huge Spector-esque production, building and building until he screams So I don't care, let 'em laugh at me, if that's the fare, I have to pay to be free

I love discovering songs I haven't heard before and my friend Gordon's new night at The Admiral Everything Shakes was a great place to do just that. 2 new young bands and DJ's playing vinyl only. The next night will be on Friday 25th September. I hope to discover some more fantastic music.

This is how Gordon discovered the song;

I discovered it watching the film Good Vibrations which is about Terri Hooley and his record shop which he opened during the troubles in Belfast. Despite this he carries on and releases Teenage Kicks by the Undertones as well as some other good tracks that never got the same acclaim such as Big Time by Rudy. Anyway at the end he puts on a massive punk show in Belfast town hall. It's supposed to raise funds to keep the shop and record label running but he has half of Belfast on the guest list and he loses everything so he gets up with all the bands and he sings laugh at me by sonny Bono. It's a fuckin amazing moment! Glad you liked it!


Why do they try to make me run?
Son of a gun, now


What do they care, about the clothes I wear?
Why get their kicks from making fun, yeah?


This world's got a lot of space
And if they don't like my face
It ain't me that's going anywhere, no


Instead of why
What did I do to you?
I don't know what to do

Labels: 1965, 7-inch vinyl, Cher, Everything Shakes, Glasgow, Laugh At Me, Laugh At Me lyrics, Sonny Bono, The Admiral, vinyl only

Just saw Good Vibrations for the first time the other day on Mubi. An absolutely fabulous watch.

Blown away by the Laugh at Me performance in the movie.

Here's the real Terri from 1980: https://www.youtube.com/watch?v=xEYOdac_alg