Bis and Cloth at the Old Hairdressers

Last night was one of those nights when everything seemed to come together. Bis, the DIY pop punk band who burst on to the scene in the 90's as the first unsigned act to play on Top of the Pops, were celebrating their new album, released on Last Night From Glasgow, the modern crowdfunded not for profit indie DIY label.

The rammed show in the Old Hairdressers was the second in a trio of sold-out weekend shows across Glasgow to promote Slight Disconnects, their first album in 5-years.

The Old Hairdressers is one of my favourite venues in Glasgow. It started out as a pop-up bar/arts venue and thankfully it has never lost that sense of atmosphere. Downstairs is sparse, open brickwork, the odd poster, some hastily assembled tables and chairs, fairy lights and a tiny bar. It is dimly lit and full of music fans - my kind of place.

Upstairs through a maze of stairs is what I describe to friends as a New York loft style party venue.  There is no stage, a tiny pop up bar in the corner, a merch table as you come through the door and a soundesk in the far corner. It's the kind of venue that some bands can take by storm, others might fall, there is no hiding behind a fancy light show or huge soundsystem at the Old Hairdressers, you've got to be on it. 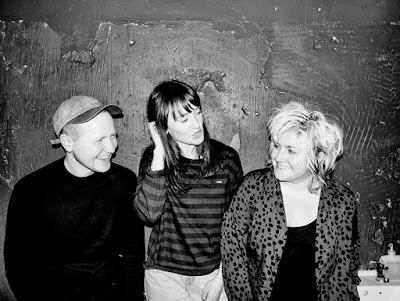 Cloth at the Old Hairdressers by Brian Sweeney

Support for the night was fellow Last Night From Glasgow signings Cloth, a band turning more than a few heads thanks to recent 6Music and Radio Scotland sessions. The band have been releasing a song every couple of months, building a growing word of mouth buzz thanks to their sound which I can't help but liken to The XX in the way they play their guitars. Twins Rachael and Paul Swinton front the band playing guitars with Rachael on lead vocals. They are brilliantly backed by Clare Gallagher on drums who switched seamlessly between a standard kit and an electronic one.

This was the third time I have seen them and it was the best. Their reverb-y, sparse guitar riffs and melodies are all kinds of dreamy and Rachael's voice is one that is easy to fall for. Tripp was a highlight for me last night. Cloth probably haven't made it to double figures in terms of gigs, but on last nights evidence they are full of confidence, mystery and invention. 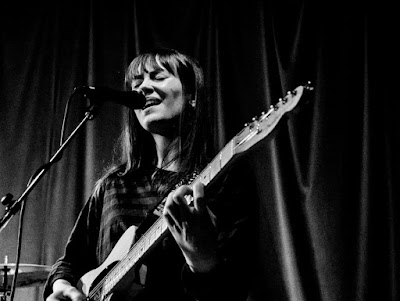 Check them out on all the usual online platforms. Enjoy watching them build towards their debut album later in the year. They head to London at the start of March to play the Sebright Arms and have announced Glasgow shows with Broken Chanter at the Glad Cafe and the Hug and Pint in May. 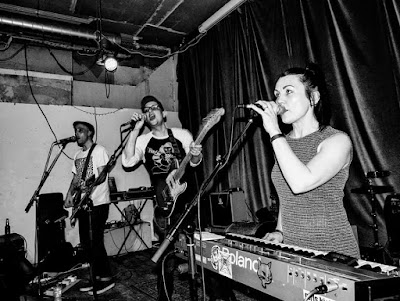 Bis at the Old Hairdressers by Brian Sweeney

On to the headliners. Bis were an absolute delight last night, full of punky teen energy, angst, humour and hooks. They didn't build up their set, more like they started in fifth gear with the opener Sound of a Heartbreak off their new album and then just kept their feet on the pedals.

Sci-fi Steve, John Disco and Manda Rin were in brilliant form, clearly enjoying themselves and that spread quickly and easily to the audience. The bounded, pogo-d, yelped, screamed, shouted and bopped their way through high energy pop. The chemistry between the three friends is crystal clear to see. Another newby There Is No Point was delivered ferociously, it sounds fantastic on vinyl but for me Bis are a band that really come into their own when you see them live. 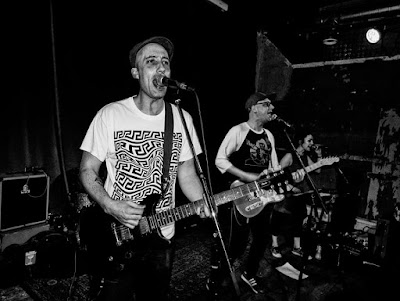 Bis at the Old Hairdressers, picture by Brian Sweeney

Old Bis classics, that Steve and John both joked should have been massive but reached number 74 in the charts, were aired along with plenty of new songs. Kandy Pop was a 100mph romp and Eurodisco started the encore even faster and there was even more dancing and singing.

The Big Sunshine which closes the new album is an absolute beauty, written in memory of a lost friend, it has echoes of New Order and it sounded superb last night.

There was no chance that the band were getting away with a two song encore so they had one last blast with Kill Yr Boyfriend before a well deserved rest. They play the Hug and Pint in Glasgow tonight and after 3 sold out shows over a weekend I suspect there will be a larger Glasgow show later in the year. Oh and any festival bookers who happen to read this blog should book them up now. 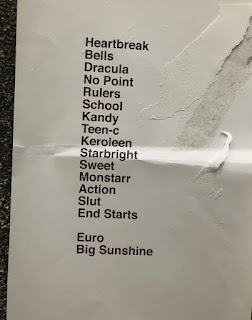