Gerry Cinnamon blitzed the world famous Barrowland Ballroom in Glasgow last night and he’ll be back to delight his army of fans and do it all over again tonight.

The Barrowland Ballroom was packed long before Cinnamon took to the stage and the pre-show build up was more fun than most bands/artists actual shows. The pre-show setlist pumped out classics from The Temptations, Oasis, Dylan, Bob Marley, Neil Diamond and more, sing-song after sing-song to ensure that the crowd was in fine voice for Gerry taking to the stage. Hands were in the air, people were on shoulders, people had their arms around their mates and strangers and people sang from their hearts with smiles on their faces. As I said, this was pre-show.

The last song on the playlist really got things going though as KC and the Sunshine's Give It Up blasted through the speakers and the crowd chanted Gerry Cinnamon, Cinnamon, Gerry Cinnamon to  the tune.

Dramatic music took over and Cinnamon took to the stage with the usual twinkle in his eyes and smile on his face. The ovation he received was incredible. Check the video from YouTube below.


I mentioned Oasis earlier in the blog. The way Cinnamon is connecting with people, the way that kids are picking up acoustic guitars to learn his songs, the way people are singing them like terrace anthems, is comparable to the way Oasis and Noel Gallagher connected with kids in the 90's.

I was fortunate to attend the two Oasis Barrowland shows back in December 1994 as an 18-year old and those shows will stay with me for the rest of my life. I looked around the audience last night and saw plenty of young teenagers hanging on to every word from Gerry's mouth in the same way I did as a teenager. I saw the way they went crazy to the songs, singing, jumping, punching the sky - and me and my mate Robbie joined them, lost in the music and the atmosphere, young at heart and feeling euphoric.

Robbie is another person that Cinnamon has encouraged to (re)pick up the guitar, only he is considerably beyond his teens! 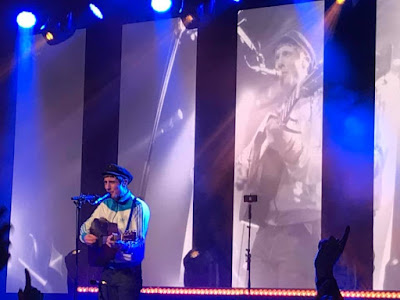 What a show! Cinnamon was on fire, bounding around the stage, shouting to the crowd are we in? and then positively answering his own question with a loud yyyyeeeessss and cackling his beautiful laugh that made the whole Barrowland Ballroom know that he was enjoying himself as much as the crowd. Audience and artist were one last night, it was pure and powerful, there was total euphoria, an incredible atmosphere.

Cinnamon played his album in full, including a couple of tracks he rarely plays live and one, War TV, that he said he had never played live before.

Highlights? Well it was all one big euphoric high of a show. The chorus of Lullaby was sung as loud as any I have heard at the Barrowlands in 25-years of shows there (showing my age). Sometimes is a real favourite of mine, the looped guitar riff, beat and run of memories flows superbly.

Fickle McSelfish was a personal highlight for me though. I love the way Gerry sings the chorus with one line answering or expanding the line before it. And I love the line then you pulled on my hair and bit on my lip 'til it bled, f**k the notion of living without you I'd rather be dead

There is a moment in new song Canter where Cinnamon declares here comes the rain and it is euphoric, the place goes mental. And that's after a delightful pause and kiss off in the chorus. Another new song, I think its is called Darker Days, sounds really promising, I look forward to hearing it recorded.

Belter was sensational, it's a song that I've now heard buskers in Buchanan Street playing. It touches people. Cinnamon wears his heart and soul on his sleeve and remains true to his roots and beliefs. That comes across on stage and on record. Cinnamon’s album has been out for a little over a year and for me, and from the reaction last night, it has grown stronger in that time. It’s only 9-songs long yet it goes deep; there are memories, observations, there is humour, social commentary, love, hurt and dreams. He packs a lot in.

Cinnamon was always quick to thank the crowd and a couple of times he raised his glass to declare them his band. We were all certainly backing singers last night.

The encore was superb. Keysies is a real favourite of mine, Gerry really paints a picture with his lyrics and his voice is rich and soulful. A cover of Fairytale In New York was festive and euphoric before the place went crazy for his cover version of Discoland (which will be my next cover version of the month feature).

What better way to end a night at the Barras than with Cinnamon's love letter to the city, Diamonds In  The Mud. Gerry talks of places, of haunts and characteristics, his humour shines through, as does his clear love for the city.

Gerry declared that he just wants to play shows and release music. I'm not the only one looking forward to his next release. I'm pretty sure that there will be something in 2019.

Cinnamon ends the year by playing Edinburgh's Hogmanay party and there are lots of others shows already booked in Europe and across the UK. Look out for festival announcements coming - there are bound to be a few.