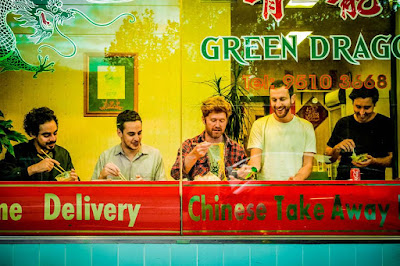 I can't remember where I first read about Rolling Blackouts Coastal Fever, but whatever I read struck a nerve and I thought I had to check them out. I'm glad I did. The 5-piece from Australia have created a gem of a debut album in the shape of Hope Downs.

The rhythm section is exceptionally tight throughout, allowing two electric guitars to chime and scream, all underpinned by an acoustic.

There is an urgent energy and natural flow to the songs and the album. Air Conditioned Man blitzes by and Talking Straight has a similar drive to it before exploding gloriously into the chorus.

Unless my well worn ears are mistaken, Hope Downs is the sound of a band on the up. They have captured something in a brilliant way and the whole album has a great vibrant feel to it. It is one of my favourite of 2018 and I find myself returning to it regularly.

Rolling Blackouts Coastal Fever are touring extensively and come to Europe in October. No Glasgow (or indeed Scotland) date has been announced yet. Here's hoping!